Here today, via streets.mn alumnus Nick Magrino’s Twitter, is the most important chart I’ve ever seen. Take a look, and then I’ll take a stab at explaining it: 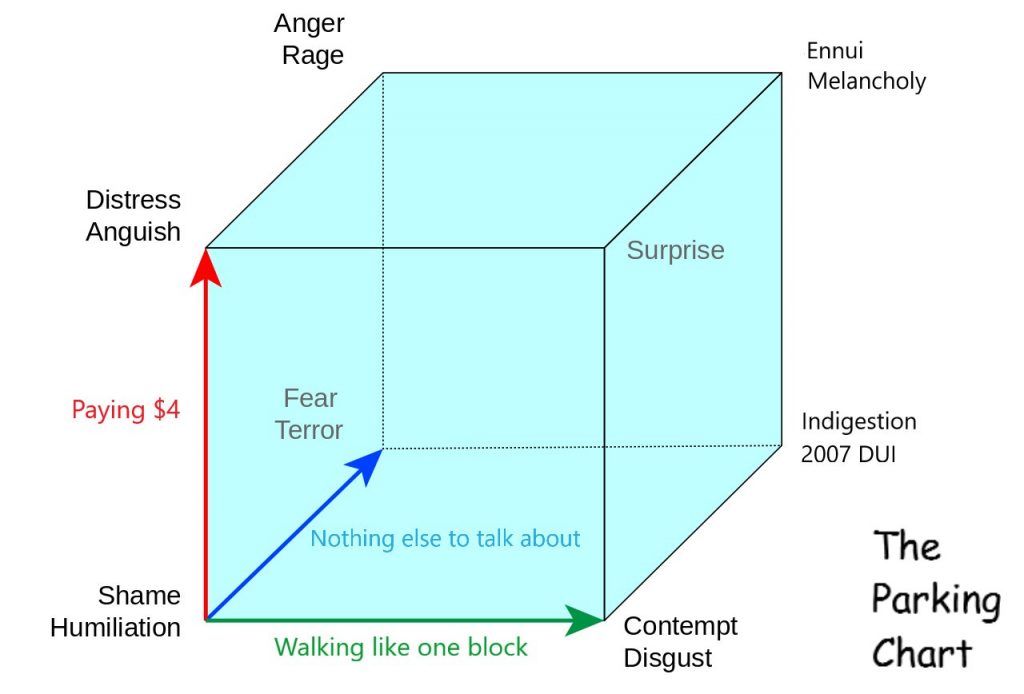 So what we have here is a three-dimensional chart that lays out the dominant affective trajectories of parking logic. Starting at the origin point, you can see three “directions” extending outward. These are the primary axes of parking logic, showing the dominant attractors of narrative condensation within US urban and transportation discourse: “walking like one block”, “paying $4”, and “nothing else to talk about.”

It is estimated that around 90% of parking narratives occur along these basic vectors, at least according to the participant-observation-based ethnographic methodologies conducted by the chart’s creator. While other narrative trajectories are possible outside these three dominant logical dimensions — for example, environmentalist or spatial efficiency logics — these non-hegemonic psychologies have small sample sizes and can be usefully excluded from most meaningful parking analyses.

Overlaid on top of the three primary logics is a set of affective qualities, beginning with the dominant affect of parking logic: what early 20th century German parking scholars have termed “parkenschade“, most often translated as “the deep sense of shame and humiliation from having to park one’s car in an urban environment.”

From this point, the emotional-affective sublimations occur alongside the primary logics, and other affective states emerge to express themselves through the construction of parking narratives. Here we see the unfolding dynamics of parking-based emotions, including distress / anguish, anger / rage, surprise, indigestion / 2007 DUI, fear / terror, contempt / disgust (either for one’s self or for others), and, at the highest levels of emotional-affective complexity, ennui / melancholy. The unfolding vectors of the vast majority of parking conversation can be represented within the phase states depicted in this useful chart.

1 thought on “Chart of the Day: The Great Cube of Parking Logic”