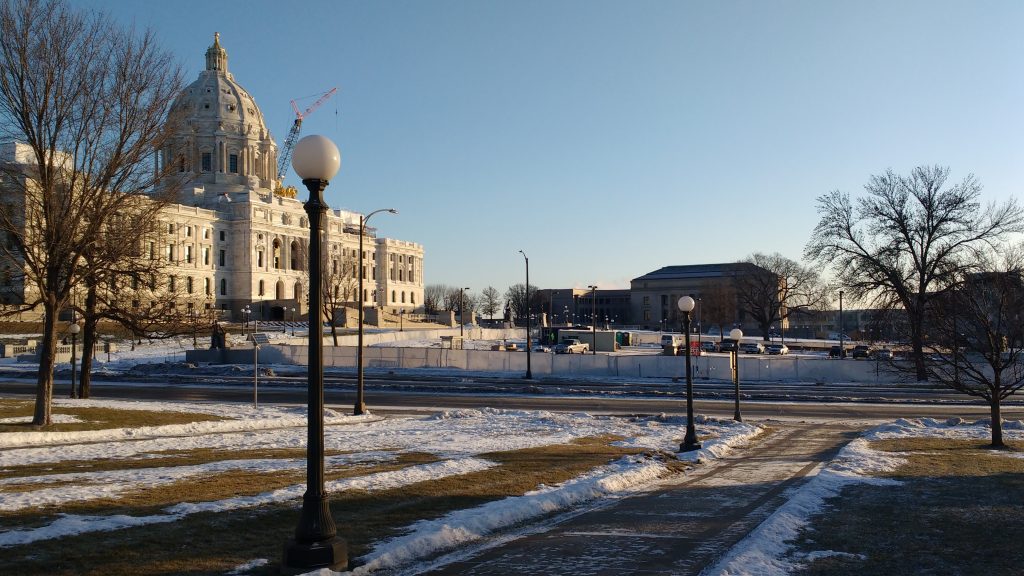 It’s time once again for the Minnesota legislative session, the annual period of time when laws are debated at length, stall out completely, and then get decided at the very last minute with no prior knowledge of what’s in them. For those who are into politics, it’s a fun time.

But I want to take today and discuss an open secret about the Minnesota state capitol located in Saint Paul, Minnesota: it’s terrible urbanism.

I know this because I worked there for years. Back in the mid 2000s, I staffed a part-time job at the legislative reference library on the top floor of the State Office Building, before working one entire session as a Minnesota House page. My time at the Capitol complex overlapped with the time when I began writing my blog about sidewalks, and I thought a lot about and experienced first-hand how bad the urban landscape of the capital area has become. 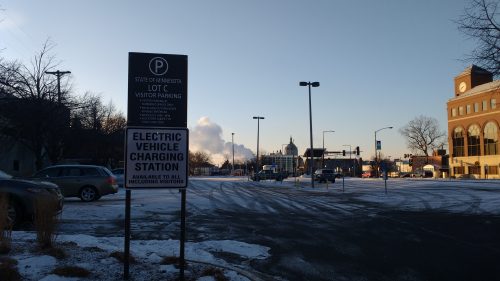 To put it mildly, from a walkable urban fabric perspective, the Minnesota State capitol does for downtown Saint Paul what the HHH Metrodome did for downtown Minneapolis. The only real difference is that instead of Hubert’s Bar you have the Kelly Inn / Best Western in the parking lot by the onramp.

If you don’t understand the reference, it’s a nod to the fact that the large multi-purpose downtown Minneapolis stadium built in 1982 had an almost negative economic impact on the city surrounding it. In all those years, not one business popped up anywhere near the Metrodome aside for Hubert’s Bar, which was dilapidated and abandoned whenever there wasn’t a game. The stadium was, instead, surrounded by acres of ill-kept surface parking lots full of detritus tumbleweed.

The oceanic expanse of the Rice Street Sears / DMV.

And while the capitol mall is nicer to look at, what with all its grass and statues, from an urbanist perspective the same moonscape effect holds true of the Capital Area.

Don’t believe me? A simple exercise illustrates this perfectly.

Here is the list of non-Kelly Inn restaurants and bars within a 10-minute walk of the Minnesota State Capitol steps: 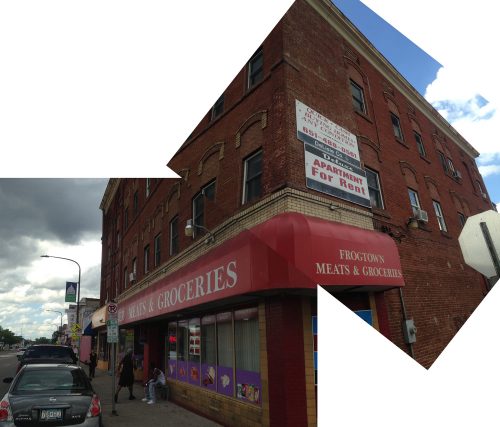 I wrote about this block a while ago.

* You have never heard of these because both of these small hole-in-the-wall restaurants are in old and run-down buildings and very infrequently visited by Capitol staff or visitors because they involve an encounter with visible signs of poverty on Rice Street. The block where they exist is just out of the control of the Capital Area Architectural and Planning Board (CAAPB), or the buildings would have probably been torn down for parking by now. [knocking on wood] 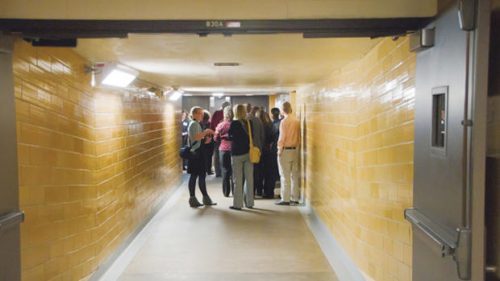 People scurry about in these tunnels instead of going outside.

I should also note that there are many employee cafeterias located in the capital area complex, all connected by a well-used tunnel system and serving food produced by a food contracting chain. When I worked there, I was told that the “best one” was at MnDOT, though I always preferred eating in the Capitol basement “rathskellar” when the legislature was in session, simply for the people watching.

Outside of maaaaaaybe two dozen days per year when there’s a big rally or event (e.g. an anti-war rally, the Kommen walk, or the Twin Cities marathon) that takes up the whole of the state capitol lawn for maybe six hours at a time, the vast vast majority of the time (24 times per year times 6 hours over 8,760 hours in a year = 1.6% of the time there’s people using the capitol lawn) the capital lawn with all its curving wide roads and mildly interesting statues sits desolate and empty. Taken as a whole, there are probably more people using the space for Pokemon Go purposes than anything else.

So why is Minnesota State Capitol urbanism so terrible?

It’s a long story involving urban renewal dollars, the decline of bourgeois enclaves, industrial expansion, racism, freeways, architectural history, institutional biases, and lots of politics. I promise to get into some of that in a future post, but if you want a sneak preview, just know that there used to be an extremely diverse and interesting neighborhood here [photos below], it was all torn down from the 30s to the 60s, and in 1970 a huge area around the Capitol was given to a committee made up of legislators and overseen by the State Department of Administration.

Here’s a picture of what that building looks like: 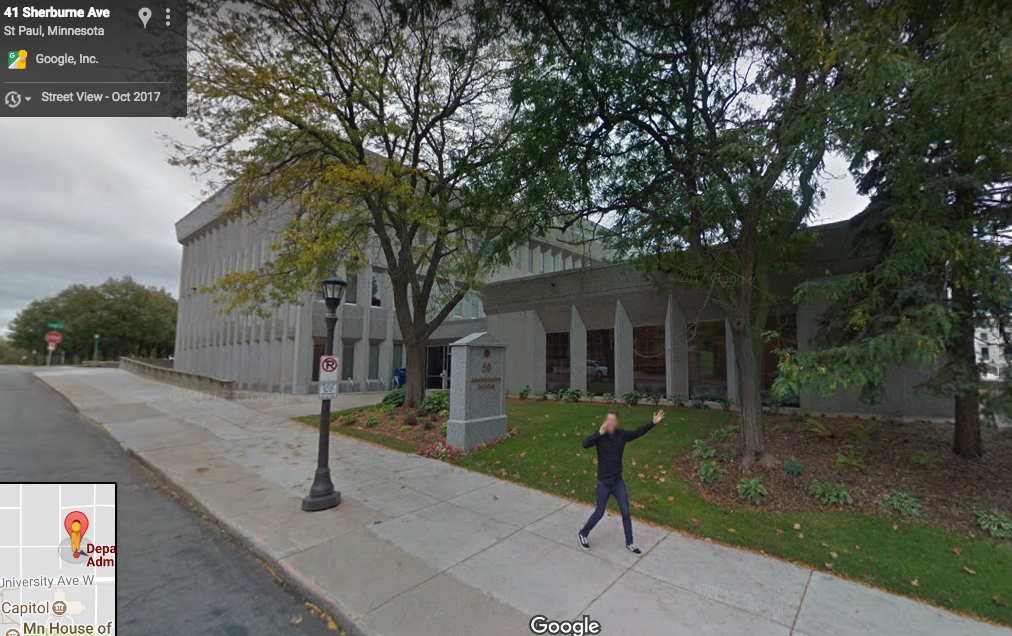 As it sits today, the actual City of Saint Paul has no zoning or land use control of this area. Instead, the capitol complex as defined by the boundaries of the CAAPB, is desolate grey parking-laden symbolic landscape that looks good when viewed from a distance but does almost nothing to improve the walkable urban fabric of the city other than provide a backdrop for the admittedly stunning capitol building.

From an urbanist perspective, the area resembles the capitol of a 1970s Soviet republic, windswept and barren. The closest thing to a “civic building” along the mall is the History Center, and even it turns its back to John Ireland Boulevard and is perched awkwardly along some freeway on-ramps and deadly Kellogg Boulevard. The other post-war capitol complex buildings are featureless modernism lacking any engaging detail along the street frontage. 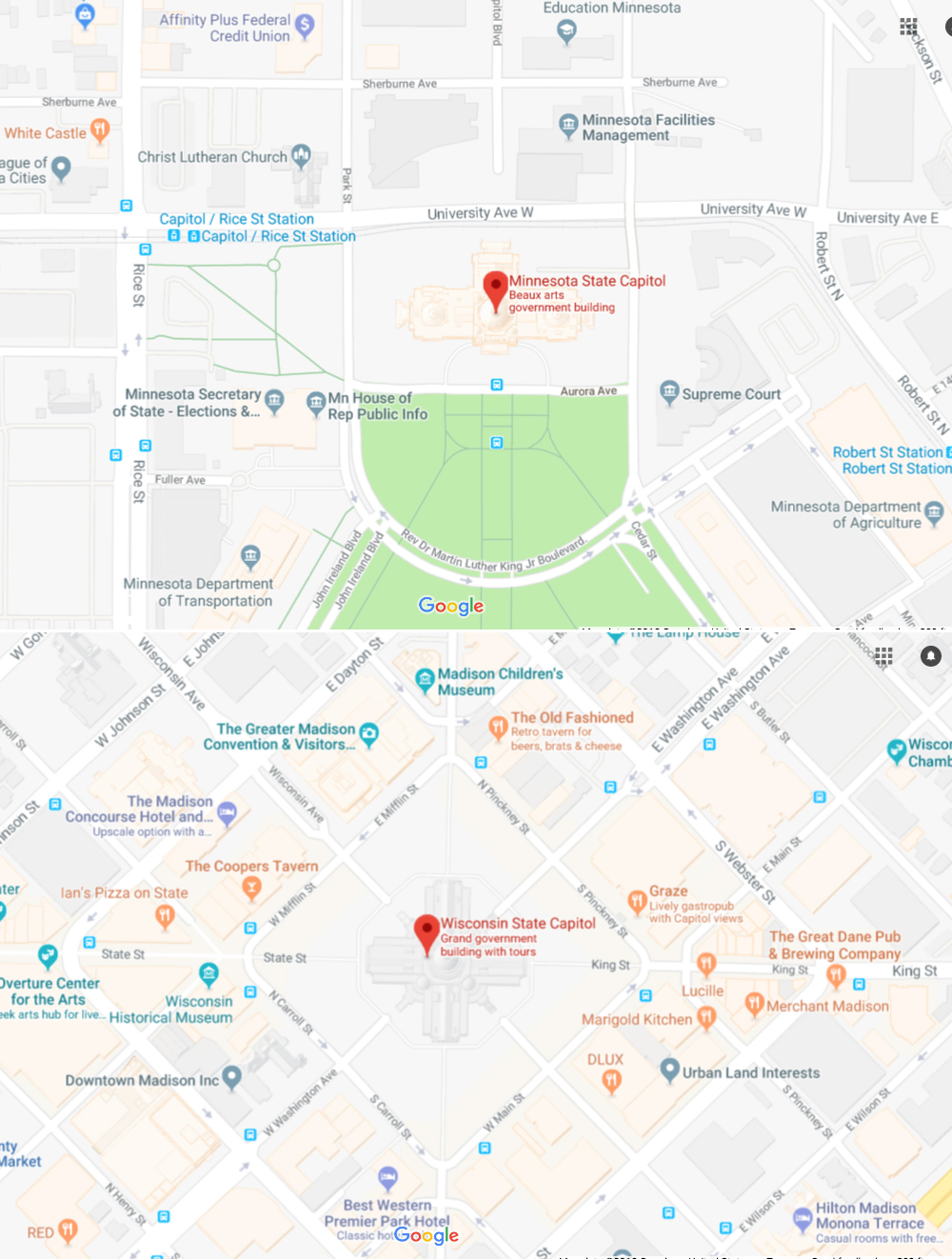 The Google Maps view of both Minnesota and Wisconsin state capitols at the same scale.

I always contrast the lifeless Minnesota State Capitol in my mind with the amazing example of the Wisconsin State Capitol in Madison. Both buildings are beautiful, but the key difference is that the Wisconsin building is surrounded by vibrant urbanism. It is in every way the gold standard for how a state capitol and its surrounding government buildings can fit seamlessly into a walkable city.

Here’s a list of all the restaurants and bars within a five-minute (!) walk of the Wisconsin State Capitol steps according to the Walkscore website:

I don’t know if all of those are real or not, but you get the idea. If you expanded to a ten-minute walk shed, the area would increase exponentially rather than linearly.

It’s worth pointing out that there’s nothing else about Wisconsin state government right now that is better than in Minnesota. Their politics has been a garbage fire in my opinion for many years.

Maybe in a later post I will brainstorm some ways to fix the many overlapping problems surrounding the capital area. Feel free to start the process in the comments below!

PS. Here are pictures of what the area used to look like. 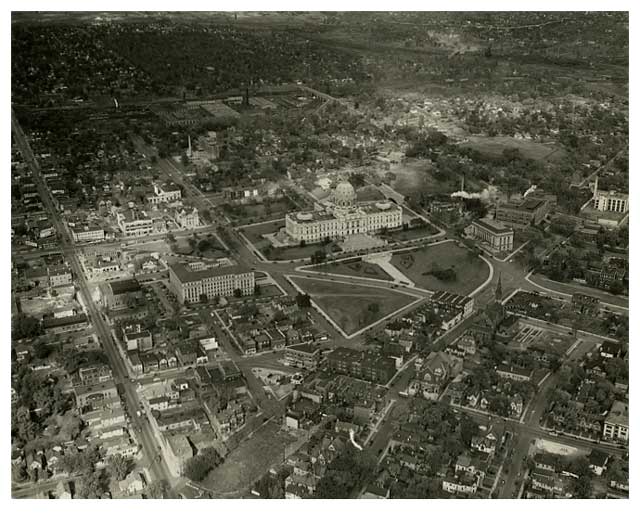 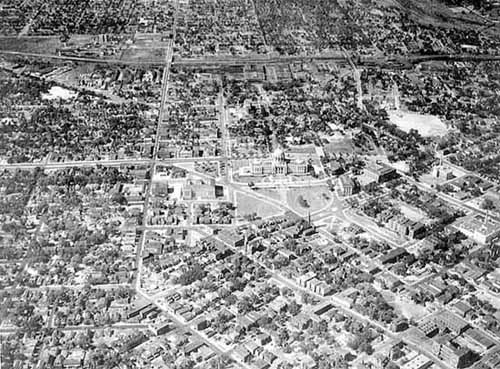 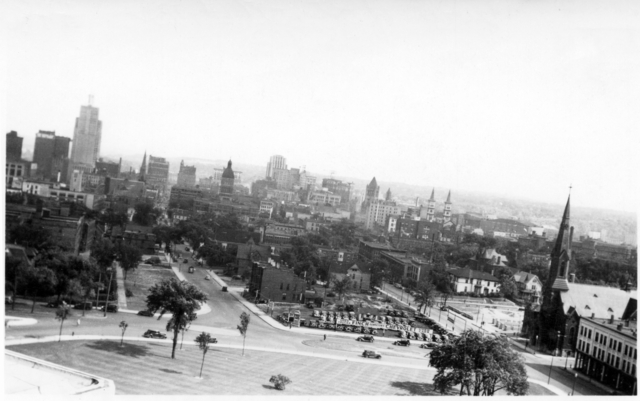 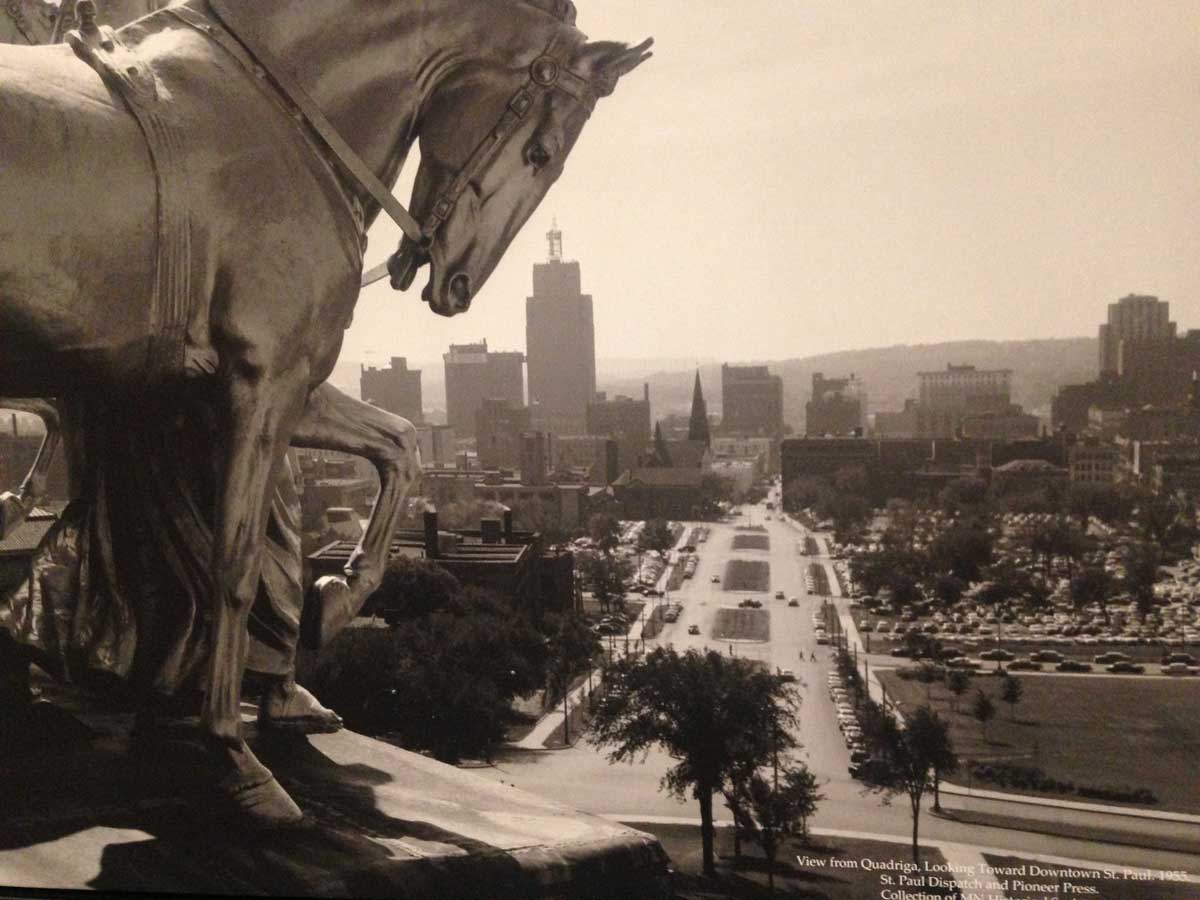 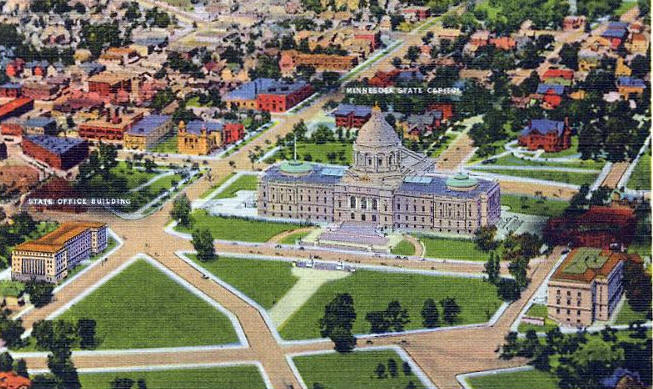 52 thoughts on “Alas, the Minnesota State Capitol is the Anti-Madison”