Let’s talk about ADUs. First the definition from the City of Minneapolis:

An accessory dwelling unit (ADU) – also referred to as a granny flat, mother-in-law apartment, or carriage house – is a self-contained living unit that can be located within the walls of an existing or newly constructed home, or that can be an addition to an existing home. It can also be a freestanding structure on the same lot as the principal dwelling unit.

Currently, the Minneapolis ADU ordinance requires the property owner to live in the single-family home or duplex in order to add an ADU. The last published information showed that 104 ADU permits have been issued in the first three years they have been allowed. This is an extremely small number considering the potential. Minneapolis builds twice as many single-family homes in an average year than the total number of new ADUs built over the first three years of the ordinance. As of the last census, there are over 12,000 single-family homes that are used as rentals in Minneapolis and over 23,000 rental duplex and triplexes that could accommodate an ADU.

The solution to substantially boost construction of ADUs is to allow landlord-owners in good standing to build an ADU on their 1-4 unit rental properties. Based on the success of other cities, we could increase our rate of new ADUs up to five times by expanding the pool of people allowed to build them. Portland has allowed both owner-occupant and landlord-owners to build ADUs to help add smart housing options to neighborhoods and add much needed rental housing.

As a landlord myself, and as someone concerned about our city’s current shortage of affordable homes, I would encourage the City of Minneapolis to expand its three-year-old ADU ordinance to include landlords who don’t occupy their 1-4 unit rental buildings. How do I know this would work? I own rental properties made up of duplexes and triplexes and I would start adding 2 and 3 bedroom ADU’s on my properties as soon as an ordinance eliminating the owner-occupant requirement was passed. Unlike your average homeowner, I’m already comfortable with the idea of being a landlord.

My neighbors often cite small-scale housing as their preferred method for adding new housing in their neighborhoods. Allowing experienced landlord owners, in good standing with the city, the ability to create new, stable and safe housing options for individuals and families makes sense. Not everyone wants to live in large apartment buildings and the key to solving our current rental housing shortage is adding a diversity of new living options and having these options available throughout the city.

Increasing the building of ADUs would also encourage the preservation of older housing stock. In many of our very established neighborhoods with unique single-family, duplex and triplex homes, an owner might consider a tear down to construct a new building with more units. Allowing that property owner to add an ADU might be more cost-effective and satisfy neighbors concerned about maintaining the visual character of the neighborhood. Any new detached ADU is required to match design elements of the existing house and has to be smaller than the current structure. Many ADU’s would fit inside the current building by legalizing another unit in the basement or attic. In these cases, no additional building would occur outside the current house.

By allowing smaller scale development of ADU’s instead of the proliferation of large apartment buildings by very large developers, the city can benefit from the fact that most owners of small-scale rental buildings live locally.

These are the 3 different examples of the types of ADU’s that could be built. 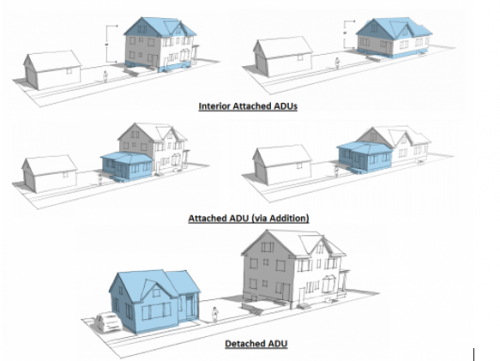 The big benefits to changing the ADU ordinance are:

● They can add 1, 2, or 3 bedroom apartments to desirable areas that can be much more affordable than other types of new construction.
● No houses need to be demolished. This acts to preserve naturally occurring affordable housing.
● Scarce additional land doesn’t need to be secured which makes building an ADU or adding an apartment inside an existing building more affordable.
● Maintains visual character of the neighborhood since they have to match some elements of the house currently on the property and they have to be smaller than the current house with strict limitations to their size.
● If the ADU is a detached additional structure, they have to be built in the back of the property so they often can’t be seen from the street.
● Creates more homes in the midst of serious housing shortage.
● When built inside an existing home, it allows existing homes to adapt to the changing needs of our city’s older population and smaller household sizes.
● Each ADU increases the value of the property, this increases Minneapolis’s tax base.

Expanding the ADU ordinance by allowing landlord owners to build ADUs would also support the goals of the Minneapolis 2040 comprehensive plan by adding more housing options (up to fourplexes) throughout the city. Adding one additional housing unit to the thousands of existing 1-4 unit rental homes allows development throughout the city and opens opportunities for people to live in areas they didn’t have access to in the past. We can add smart, unobtrusive carriage houses to neighborhood interiors, in desirable areas with a shortage of available housing options. Neighborhoods could add dozens of ADU homes with little impact to the neighborhood. We can eliminate concerns about concentrating car traffic as with large-scale apartment buildings. And it’s an attractive option for owners because building an ADU doesn’t require the purchase of additional land and often, it can be added inside the current building.

There are other ways to make the process friendlier to landlords and homeowners alike when planning and building a detached ADU. Architect fees can add approximately $10,000 to the cost of an ADU project, and the planning process can be time-consuming. If the city created a half-dozen pre-approved ADU plans available to the public for free, those costs would be eliminated, and we could significantly reduce the time city planners spend on individual projects. Individual variations of these pre-approved plans could still offer the ability to create unique looking carriage houses at more affordable costs but still shorten the amount of time to approve the plans.

Portland had dramatic increases in the building of ADU’s through opening it to owner occupied and non occupied owners.  It also encourages the building of ADU’s by  waiving the fees for new construction to make this a more attractive option for property owners. In Portland, this can save $14-$19,000. (Minneapolis could waive these fees as well as a way to jump start adding housing now). Additionally, Portland has also subsidized some ADU’s to help them get built. One of the conditions in Portland is the new ADU can only be used for long-term tenants, and not for short-term Airbnb-type rentals. 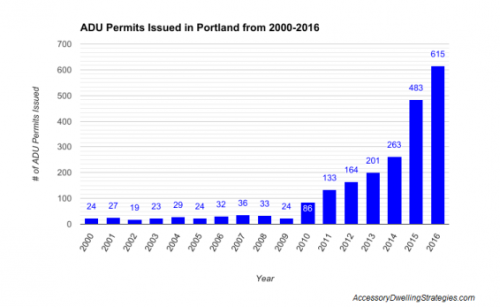 As in Portland, lawmakers in California are pursuing reforms to increase ADU development and mitigate their housing shortage. The state banned cities from enforcing occupancy limits that were used to prevent ADUs. San Diego and other cities have waived construction permit fees to spur growth. In Los Angeles, permits tripled in 2017 once reforms were enacted at the state level. 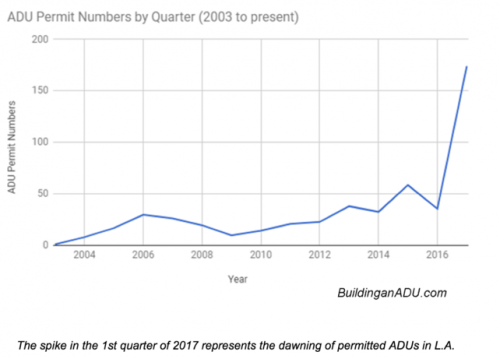 Minneapolis is changing and growing. But that change doesn’t have to be jarring and sudden. It can be incremental and done in a smart way. If Minneapolis is committed to expanding more housing options for all people, it can be a partner in the solution through a cooperative effort for pre-approved ADU designs along with the elimination of development fees like other cities have done, costs will come down quickly, and ADUs will proliferate.  Changing the ADU ordinance to include Landlord owner properties will create a jump start to adding new housing options right away.

31 thoughts on “Jump Starting the Benefits of ADUs in Minneapolis”