We were looking for a camping trip to take over Memorial Day weekend, one that could get us into the woods and out of the city. Ideally, one that would put us a fair distance away from anyone else at all. But, we didn’t want to rent a car just to park it for a couple nights, and I had this dream to bikepack one day. So, we were looking for stuff that was within reasonable distance of transit, but not too close to civilization. After some googling, we found some “backpacking” sites at Lake Maria! It’s about 12 miles from the last stop of the Northstar at Big Lake, pretty much straight west from there. Then, it’s a mile from the pavement at the ranger station to our campsite.

So, we had our destination, and how we were getting there. But we were going to have to bike the whole way back. The Northstar, and the handful of commuter busses that run out to the north suburbs, don’t run on holidays. (Actually, I couldn’t tell whether the Northstar would run or not, but we didn’t want to risk relying on it. It wasn’t until we boarded the train headed out of town that I got definitive information that it wouldn’t run.)

It was supposed to be just under 60 miles back home. That’s a pretty serious trip, so we needed some serious planning. We knew it’d take all day. We knew we’d need to have enough secure storage to keep all of our camping gear safe and with us the whole way back. Fortunately, we’d backpacked before, so our gear was already compact and light, perfectly suited to putting on a bike. Tacking an additional 5 miles over the most efficient route felt painful, but we really wanted to take the trails through northern Maple Grove instead of the shoulderless streets of Dayton. We had phones, written instructions, and a paper bike map of Hennepin County in case everything went to hell. We had a patch kit, a spare tube, a pump, and two rear cameras between us. We had a lot of snacks and a lot of water. We had road-riding experience and enough stamina to make it, as long as we took enough breaks. This was going to be tough, but it was doable. 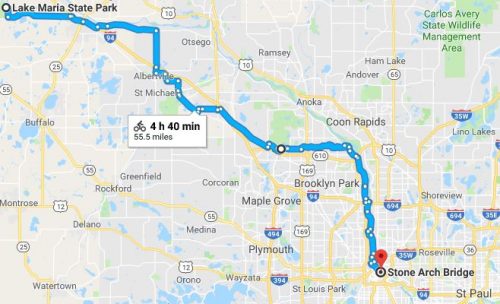 The night before, we packed. I decided to take the “strap it all down with bungee cords” budget approach, and my companion decided to get some new equipment in the form of a stretchy net and a top tube bag. He also packed more of the load than I did, because he’s nice and also because he already had a second pannier. I tested out my pack setup, shook it around a bit, and it seemed to hold up! I felt optimistic. 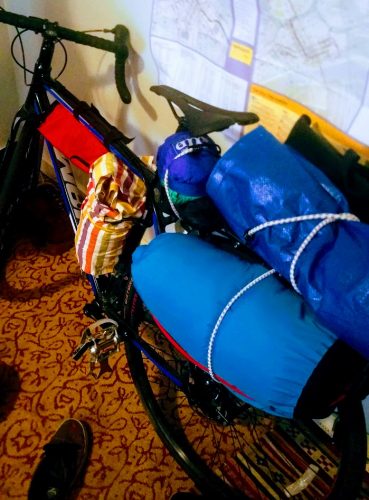 My bike, all packed up!

Next time: the trip out! Then, the trip back. Spoiler alert: we survived!!

4 thoughts on “My First Bikepacking Trip! Part 1 of 3”