At streets.mn, contributors talk a lot about how to create cities where personal automobiles take on a less primary presence, and the needs of other street uses – pedestrians, cyclists, and transit-users – can rise to the forefront. However, today I’d like to take an opportunity to discuss the vehicles that we do have, and how they’re different from those in other places and other times over the last century.

With the post-war economy in full swing and a seemingly endless supply of space and oil, our cars grew to conquer the open freeways between our cities and the wide roads of suburbia. Rather than constrain vehicles to our environment, we built our environment to accommodate our vehicles. To maximize the safety of vehicle occupants in an 80 mph freeway crash, we have added crumple zones, airbags, and steel – which has increased the size and weight of cars to the point that during three decades of technological advancement, the fuel economy of cars  barely budged. Fortunately we’ve seen slight uptick in recent years due to the addition of hybrid batteries.

Americans drive 6000 pound SUVs and empty trucks capable of towing 12,000 pounds to the supermarket for groceries; to borrow an analogy, we use a 163 lb drill press to install tiny screws in a door frame. And it’s little surprise, given that we go to great lengths to accommodate them.

It’s probably fair to assume Americans’ preference for their 163-pound drill presses won’t change overnight and these large vehicles will roam suburban mall parking lots for the foreseeable future. But in urban places, there’s an interesting opportunity to take a different tack.

Cars and trucks capable of comfortably cruising at 80 mph on the freeway for ten hours are badly optimized for city use. They are simply unnecessarily large, unnecessarily heavy, and poorly packaged.  All the weight, size, limited visibility (side airbags and higher beltlines reduce window size dramatically) regulated into them in the name of safety was only for the sake of their occupants; that same weight and size makes them even more menacing to pedestrians and cyclists than they would be otherwise. Tall SUVs in particular have been shown to be extra dangerous.

I recently was lucky enough to take a trip to Bolivia, a place where tiny, cab-over “minibuses” circulate around and between cities constantly, carrying a dozen people in the footprint of a Ford Ranger.

Local deliveries are made with Japanese kei trucks, built to a footprint and engine size that rewards them with tax breaks in Japan. 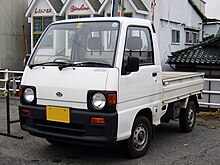 In fact, the kei cars are perhaps the last of a long series of “micro” cars produced in various countries over the second half of the twentieth century. According to the Lane Motor Museum (a delightfully weird place that I highly recommend to anyone that finds themselves in Nashville), there were hundreds of different microcars produced over the years, usually incentivized by government regulation or tax policy during times of high fuel prices or shortages in raw materials. 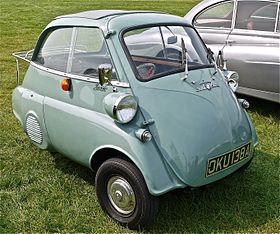 These are cars made for cities – cars that use less space, less fuel, and fewer raw materials than cars made for freeway use, and I’d love to see some of them replace full sized cars for city use. And luckily enough, microcars still exist, but are in something of a regulatory gray area. In Minnesota, a classification called “Medium-speed Electric Vehicles” allows for small electric cars on streets with a speed limit up to 35 mph (which ideally should cover more or less all streets in the city proper). However, in the case that the vehicle isn’t electric, cities must write their own ordinance allowing it. While there are clear environmental advantages of pushing electric vehicles in cities, I would argue that it makes sense to allow all microcars in Minneapolis and Saint Paul. 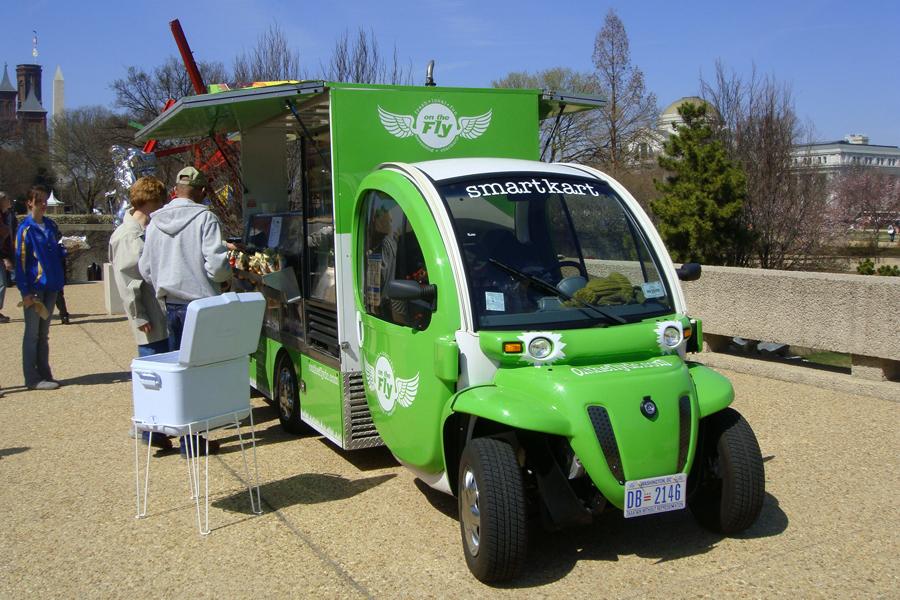 A Polaris GEM as a portable market (Wikimedia Commons)

Interestingly enough, one of the major manufacturers of these vehicles, electric and motorized, is the Minnesota company Polaris. While they are marketed towards campus use, it would be great to see them roaming the rest of the city, making deliveries and solving the last-mile problem for those who can’t walk or bike. And when used by police, they create less of a barrier between the officers and citizens.

For me, the question becomes: Why are microcars fairly uncommon, if they are, as I argued, better optimized for many urban uses than conventional vehicles? I suspect that, just as they discourage many aspiring bicycle commuters, our streets are simply too wide and too fast. As we work to calm them, hopefully we’ll see more microcars replace larger vehicles. Perhaps the Minneapolis and St. Paul governments are in a unique position to lead the way by example by clarifying the legal status of these alternative vehicles, and employing them in day-to-day use around the cities.

43 thoughts on “For Urban Vehicles, Let’s Use the Right Tool For the Job”