I had the opportunity to attend YIMBYtown in Boston. It’s a good chance to learn from other activists about what was going on in other cities, and to take a step back and look at the bigger picture. Mostly though, people just asked me if I knew WedgeLIVE (yes) or if I was behind the amazing Neighbors for More Neighbors artwork (no). Here are some short interviews with some of the speakers and organizers of this conference:

I took notes at just about every session I attended, and here are three highlights:

Ed Glaeser’s opening talk covered quite a few city-related topics, not strictly related to housing; it was a good reminder that cities exist for a reason. People are social animals, and it makes sense to live near each other and share ideas, do business, cook food, take care of family, etc. The 1960s and 1970s brought challenges to cities as places to live, as cars made it possible to commute to cities for work and live elsewhere, and the mass exodus known as “white flight” accelerated. For reference, the population of Minneapolis dropped from 482,000 (in 1960) to 370,000 (in 1980).

Cities are on the rise over the last decade or two. People seek more opportunity and are tiring of suburban lifestyles (why do we dedicate so much land to something almost everyone hates: driving?). Small towns, suburbs, and other low-density areas often lack opportunity, and this opportunity is only accessible to those with a car. Cities can act as a refuge against a sprawl-centered lifestyle, but only if cities have enough housing to accommodate all who wish to live there.

To move forward, cities should find ways to help people access opportunities without requiring car ownership. Current housing and tax policies tend to redistribute wealth to older, established residents. What is a city’s role in creating fair housing and land use policies?

Language shapes how we think about problems and how we discuss them with other people. One of the best sessions I attended at YIMBYtown was “Equity and Winning: Building successful coalitions outside your comfort zone” by Angela Park.

Park’s workshop focused on group identity and how activists must use clear, specific language to be more inclusive. For example, it’s not helpful to use words like “diversity” and “equity” without defining what those terms mean. 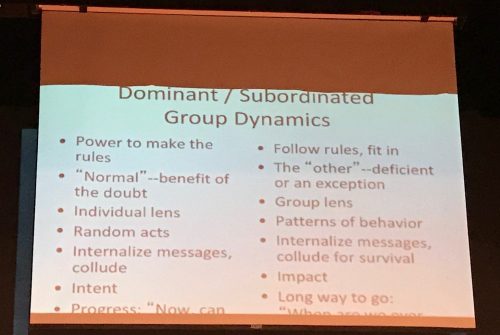 Housing activists, like everyone else on this planet, need to be mindful of power dynamics.

I’ll never be able to give this workshop a proper write-up, but it was by far the best talk at YIMBYtown.

Anti-Gentrification Activists Are Not NIMBYs

One of the more controversial sessions I attended was bluntly titled “Anti-Gentrification Activists Aren’t NIMBYs.” The message was clear: YIMBYs should take a backseat when advocating for new housing in gentrifying neighborhoods. 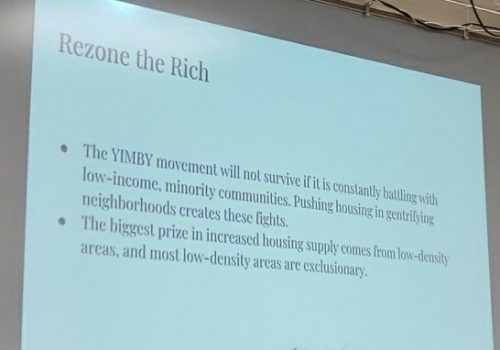 Rich people often have the political connections to keep new housing out of their neighborhoods.

One key difference between those who oppose all housing and those who oppose gentrification is that the latter are often able to gain concessions as part of new housing. Multiple projects in the Mission neighborhood of San Francisco include more affordable housing and commercial spaces that rent at far below market rates. While a tactic anti-housing people prefer is to “concession a project to death,” those who focus on anti-gentrification have been successful in getting more affordable homes built in new developments (without stopping home construction).

Finally, here are a few slides from Joey Lindstrom from the National Low Income Housing Coalition: 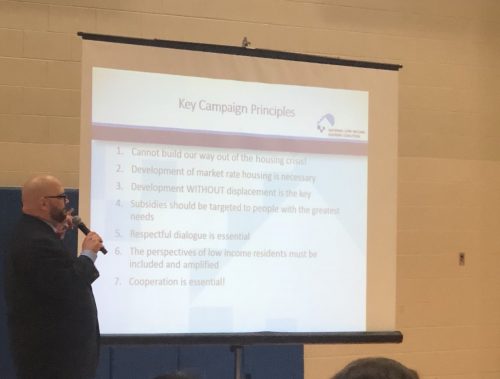 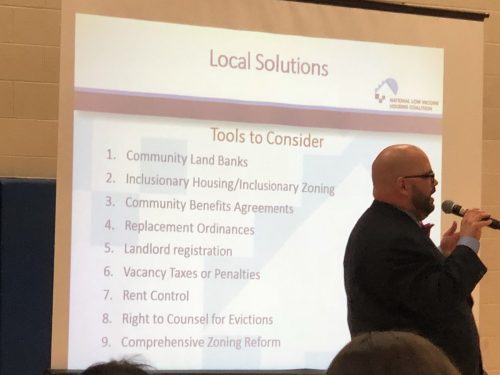 3 thoughts on “A Few Notes From YIMBYtown”