Looking at the surface, an amphitheater at the Upper Harbor Terminal (UHT) would be fantastic. Selfishly, it’s just over 2 miles from me and the thought of seeing an outdoor concert at 10,000 capacity, and within walking distance is almost a dream. Awesome-O! I was intrigued enough to take a walk on the grid to hopefully learn more.

This North Minneapolis riverfront plan (opens Aug. 18 PDF) would certainly have its pros and cons along with questions. Is it easy to walk/bike there? How much of a burden will vehicle traffic be during event exiting? How will it affect housing and community? How much does the community know? Who’s paying for it? Who’s in charge? It’s a pretty mammoth sized project proposed at 48 acres, including 15+ acres of green public park areas.

To sum up a history, this plan came in with the St. Anthony Lock and Dam closure downstream by downtown due to gross, invasive carp. The UHT barge terminal operation then closed down. The terminal is now largely used for a host of industrial businesses, plus the specialty Mississippi Mushrooms and their weekend markets. 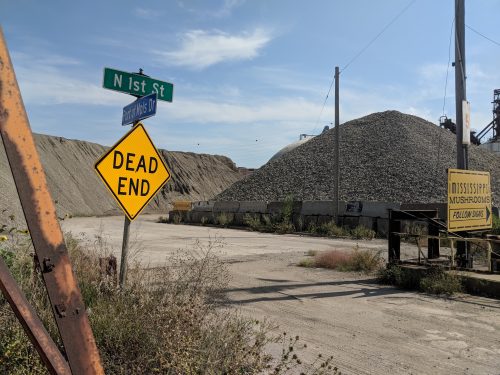 Couple these with the wants of the city, Minneapolis Park and Recreation Board (MPRB), and proposed features from Master Developer United Properties, and you have plans for the North Minneapolis Riverfront. The Community Performing Arts Center (CPAC) would be a key element and operated by First Avenue Productions. This destination site includes the amphitheater, 15+ acres of public green space, riverfront park, parkway, mixed-use buildings, retail, and possibly hotel(s). 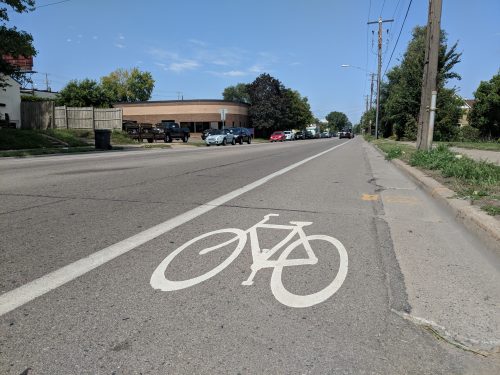 So, how will exiting traffic affect nearby Minneapolis neighborhoods? Amphitheaters like Red Rocks and the Gorge in George (WA) are exiting traffic nightmares and are towards or in the middle of nowhere. No matter what, an amphitheater in the city will most likely result in traffic nightmares for both concert goers and nearby neighborhoods. They do mention a parkway to get to and from the Minneapolis Riverfront. It’s just a little, and maybe for those on bikes, it’s promising. Currently, nearby N 2nd St only has an unprotected bike lane. Looking from the Lowry Ave Bridge, I was surprised to see no bike parkway. I just figured there was always one there. I can only imagine they are going to improve or build on all of these. I would hope so, anyway.

They also place a presence on housing, including affordable housing. However, “including affordable housing” to me is usually just clever wording for market-rate housing. A concern could be not just the new housing, but also rentals in nearby North possibly going up. North Minneapolis is so community driven and it wouldn’t be a surprise (to me) for many residents to be generally against this new UHT destination. No one wants their rent increased by landlords using this new project as an excuse to do so. Related, here’s Beth’s story from Loring Park, just one of many concerned citizens in regard to protections for existing renters, not more neighbors.

Similar fears happen in parts of Northeast as well. WCCO reviews a few neighborhood people in fear that raising housing prices can price people out of their neighborhood. It happens in my neighborhood often, and maybe yours as well. People love Northeast, especially the Arts District. My guess is the folks there would be apprehensive if the same project was to be built on the east side of the river. Northsiders have their view, too.

A couple quotes from a North News piece:

Northsiders and North Minneapolis leaders have continued to stress the importance of being involved in the visioning process.

“There’s a way for them to do this development organically, without tearing this all down, so people can grow on it and we want to be part of that,” said Ian Silver-Ramp, founder of Mississippi Mushrooms.

Public investment is slated at $30 million, including the $15+ million in state bonding that’s already been approved. Maybe there’s some solace in knowing we could build approximately 16 or 17 of these at the cost we’re generously giving to Zygi and his palace. Also, the City of Minneapolis would own the UHT land until a master developer agreement is reached.

First Avenue Productions is one of the development partners for this. I really look forward to see the vision Dayna Frank and co. has.

The conceptual part is now complete but still in different meetings stages. They’ve had meetings open to the public as well as presence in community events like Open Streets West Broadway. Future meetings or events could be your chance to voice your opinion in person. Infrastructure and construction won’t most likely happen until 2020 or 2021 so there’s time to get in your word!

This wound up being a nice walk and a few more photos on a shared Google Photos album are more than worth sharing.