I was walking through the skyway near Nicollet Mall on Monday and watching the backed up traffic below. Single occupancy fossil fuel vehicles, car commuters, were “blocking the box” and preventing buses full of other commuters from getting home on time. The flow of pedestrians at every signal cycle was more than the number of cars had passed through.

It’s not radical to say that we need to radically change how we get around in the Twin Cities.

Employers find success relocating to connected downtowns where there is greater access to talent, and right now that talent is stuck in congestion on a bus that can’t get through an intersection. Downtown Minneapolis accounts for 34.8 percent of all metro office space, and Downtown St. Paul accounts for 8.9 percent.

Here are a few ideas of how we can improve mobility in our downtowns. They are ranked from “just need some paint” to “we really need a bigger excavator.” Comment below with your favorite one, or if you really disagree with any of them.

Lime scooters at Gateway Park on May 23. Photo: Author

This one is very simple and doesn’t need any paint! It’s hard to find a nearby scooter in the afternoon or evening that doesn’t have a dead battery. We know that electric scooters are a popular way to extend your trip to or from transit or navigate Downtown. For 2020, both cities should raise their caps to 4,000 scooters and auction off those slots to make the most return on the public investment. Operators would be limited to half of the cap. An auction with full payment up-front would decrease the chance that an operator would walk away after a few months, like what happened with Jump — owned by Uber — in Minneapolis.

This is an idea that is already being implemented. We have a lot of vacant street parking for single occupancy vehicles and neighbors complaining about scooters being parked near crosswalks or blocking narrow sidewalks. Public Works in Minneapolis has recently been installing scooter parking.

As a Streets.MN reader, you don’t need me to tell you that there is a dearth of accessible bike parking in Minnesota, let alone the downtowns. Like with scooter parking, Public Works could easily replace street parking with high-quality bike parking in a matter of weeks with the right funding.

A note on street parking: The stated purpose of street parking for single occupancy fossil fuel vehicles is to give people outside of Downtown an easy way to get to a meeting in Downtown, and subsidize their parking so they frequent local businesses. So we have a situation where some people are being subsidized to use 160 square feet of prime real estate, just so that they can save money when visiting their lawyer.

I strongly believe Downtown streets should be designed for Downtown residents and workers first. This ties into a later idea.

Every street in Downtown should have one lane converted from single occupancy fossil fuel vehicles to bikes and scooters. If possible, and working with Metro Transit, cities should design routes for bus lanes. It may be advantageous to convert smaller streets to one-way to include a car lane, two-way bikes and scooters, and two-way busses with a median to stop at.

This one is simple, but needs investment. Ridership on bus and light rail will improve if we don’t have to stand in the rain or snow.

Only about 2,000 trips are taken on Northstar every day. Map: Metro Transit

Replace Northstar with a Commuter Bus that Goes to St. Cloud

The last time that the Metropolitan Council crunched the number on farebox receipts, it found that Northstar was subsidized to the tune of $18.31 per passenger compared to $1.84 for light rail. The most expensive express bus, to Prior Lake, was still less than half the subsidy of Northstar, at $7.47. There were only 723,000 trips on Northstar around 2015, about 2,000 per day. Diesel electric, heavy rail is not the answer here. If a commuter bus that goes to St. Cloud makes it with an eight dollar subsidy, great! But if it doesn’t make sense, then let’s invest in affordable housing where jobs are in both downtowns and the exurbs.

It’s easy to hate skyways, but as a Downtown resident, I love them. I love that I can walk across the street, enter the skyway, and walk to Target without being in the heat, snow, or rain. I also don’t have to worry about getting run over by a single occupancy fossil fuel vehicle, like what has nearly happened so many times while crossing Washington Ave S or Hennepin Ave S.

Skyways promote pedestrian activity, and for those who have mobility challenges, they can be a great amenity and one of the only ways to safely and quickly get around Downtown.

Right now, Minneapolis has barriers to skyways expanding into the North Loop or across Washington Ave S into the residential area of the Mill District. I think that’s a mistake, and I know a lot of developers and residents who would love to expand skyways. They are like the subways of pedestrians.

In exchange for expanding skyway growth, I would require that walking paths be at least 20 feet wide and that sliding doors have at least 14 feet openings when open. This can be done with three-pane sliding doors. This will allow for future expansion of the network on new arteries and create a greener, healthier pedestrian environment.

When McDonald’s relocated from the suburbs to Chicago’s West Loop, it built only 295 parking spaces its 2,500 employees. Today, “more than 90 percent of workers arrive via non-auto modes, mostly Metra and CTA.” That’s a business and transit success story.

We can replicate that by having more businesses work with organizations like Move Minneapolis that consult with transportation options for commuters.

Unfortunately, some employers still have a “windshield mentality” when it comes to the daily commute. As we saw with the recent victory on the Heritage Landing Parking Ramp, cities can step up and insist on 21st-century solutions to the climate crisis and mobility. Disclosure: I was one of the residents who organized against the ramp.

Upzone Every Block Near Light Rail

What could be done with a 80 ft wide right-of-way. Vehicle passenger and delivery drop off areas could go between transit shelters. Graphic: Author

This one is simple, but needs funding and political courage. We want to encourage more pedestrian activity and reduce our reliance on single occupancy fossil fuel vehicles. Widening sidewalks puts those values into practice. Removing street parking on both sides of a street and converting to wider sidewalks would be a great improvement for many Downtown areas. 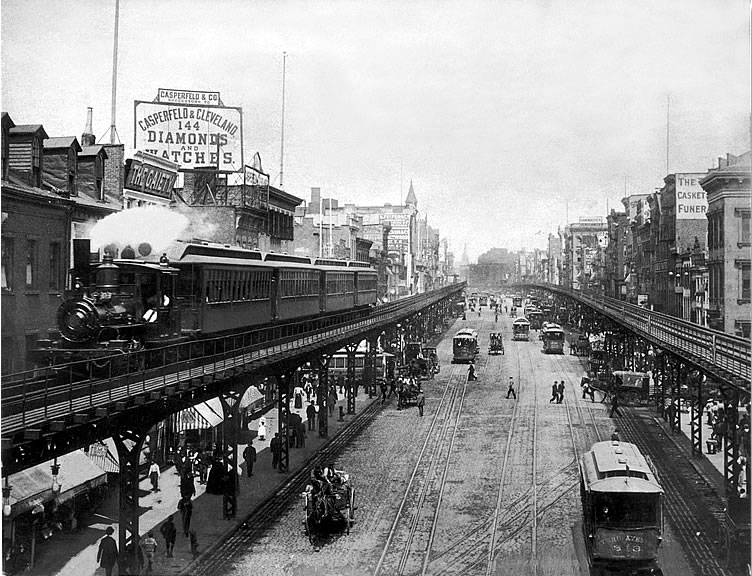 A steam train on the Third Avenue El, over the Bowery, New York City, 1896. Photo: The New York Times

Create a Transit Bank to Invest in New Transit

Right now, the biggest beneficiaries of transit development — homeowners, landlords, and developers — don’t pay the full cost of transit investment. Creating a Transit Bank could create a vehicle for municipalities to receive transit funding by financing off the projected increase in property taxes, especially with upzoning and new development.

In the early years of the subway and el trains, speculators made fortunes off of developments that followed future routes of transit investment.

By upzoning, and tying financing to property taxes, cities by themselves could fund billions in transit investment.

Build a “Circle Line” Between Minneapolis, St. Paul, and MSP

Now we are in a future hopefully not far away. Bikes lanes are everywhere, upzoning has created new affordable apartments near jobs, everybody has an electric scooter instead of a car.

With investment from the Transit Bank, let’s build a loop subway route that connects both downtowns to each other and the airport, and creates new corridors for transit-oriented development. The route would be about 35 miles and at the going U.S. rate of $600 million per mile, it could easily cost $21 billion, more than Minnesota has ever done before. Of course, the federal government subsidized over half a trillion dollars in real terms for the interstate highway system. For the Southwest Green Line extension, the federal government is expected to subsidize 46.4 percent of the cost, not the 90 percent the federal government subsidized the interstate system. The Transit Bank could help make up the difference. 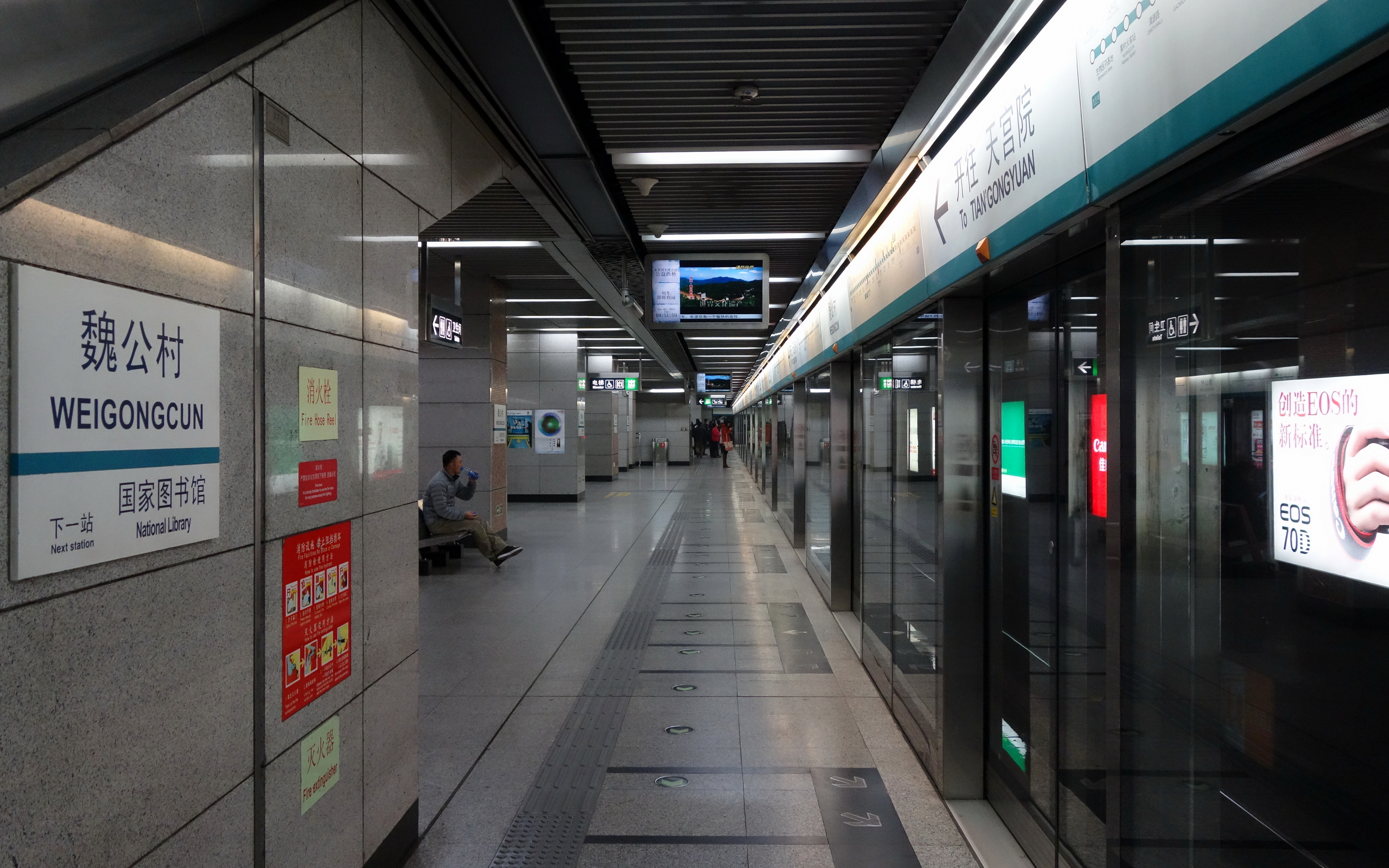 All stations in Beijing built since 2007 have platform doors, including the Weigongcun station on Line 4, which opened September 28, 2009. Photo: 颐园新居 (Wikimedia Commons)

When I was in China in 2013, I was very impressed by their new subway lines. One feature was sliding doors on the platforms so you could never get pushed into an oncoming train. Beijing has two loop lines, the 2 and the 10, and a grid of branching and connecting lines.

The name “Circle Line” comes from that the route forms a rounded triangle, and London, which I visited in 2015, has a popular line that forms a circle in the shape of West Virginia.

What are your ideas for improving mobility in your community? What are your bike parking hacks? Do you think Minnesota will ever have a subway? Share your electric dreams and your fossil fuel nightmares in the comments.