Crime in Minneapolis has been a hot-button issue recently, flaring up tensions over perceptions of violent crime and a policing strategy to address it.

Just this morning, another headline:

Headline from the Star Tribune from October 3, 2019.

As a Downtown resident, I live in one of the highest-crime areas of the city. In the past year, (365 days) Downtown West has seen 437 violent crimes, 73 percent more than the second-highest-crime neighborhood. Much of the violent crime is concentrated in the nightclub areas of Downtown, around Hennepin Ave and 1st Ave N, south of Washington Ave.

So is the crime we are experiencing now normal, or is it really higher than years past? 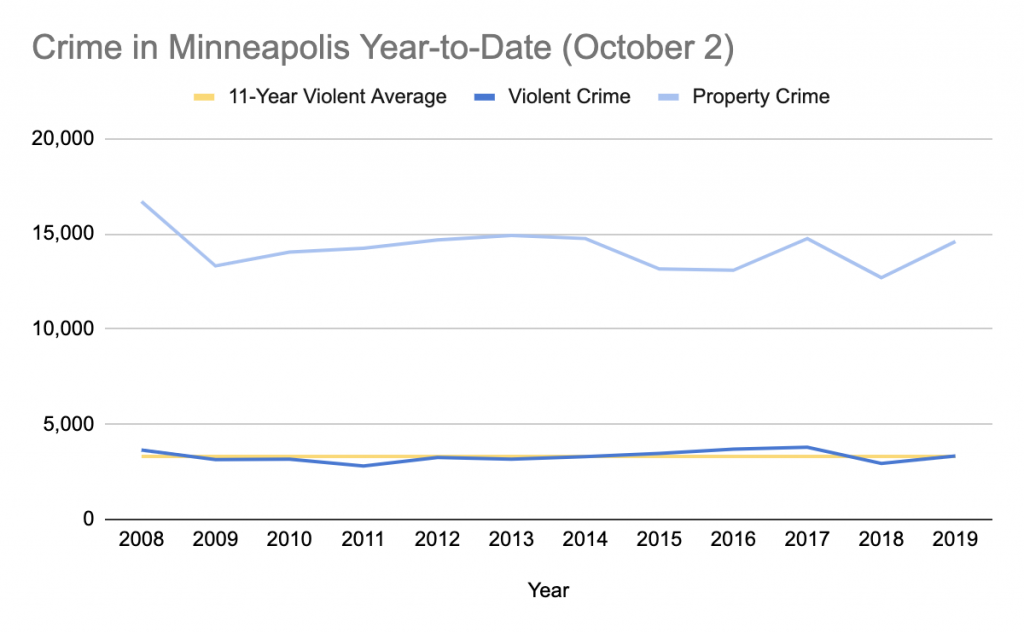 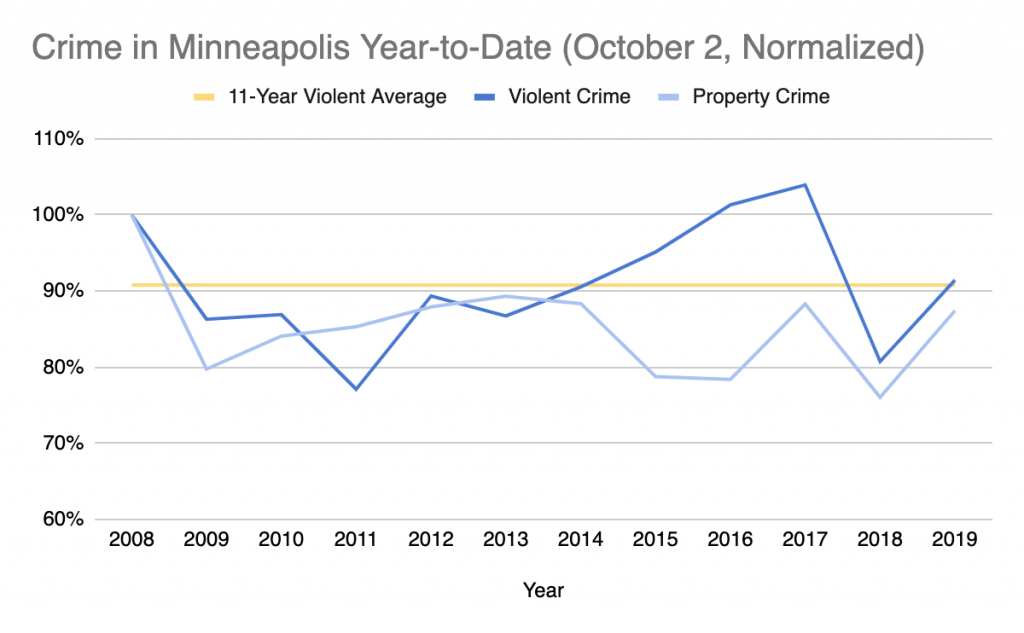 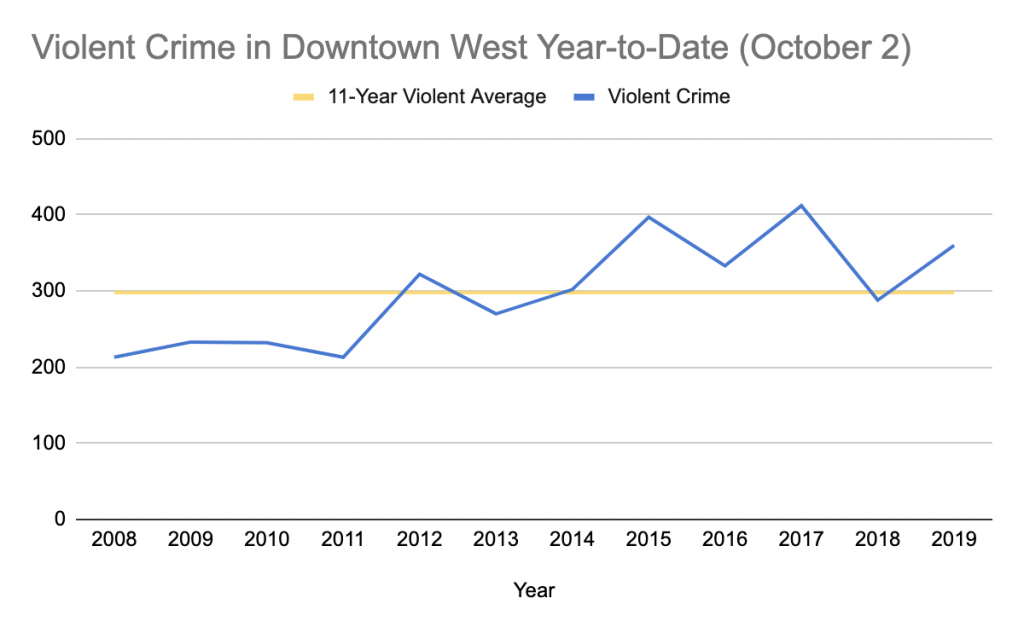 For the city overall, violent crime and property crime are lower today than they were 11 years ago when available records begin. In those 11 years, the city population has grown by about 11 percent, so the rate of crime by population has dropped as well. 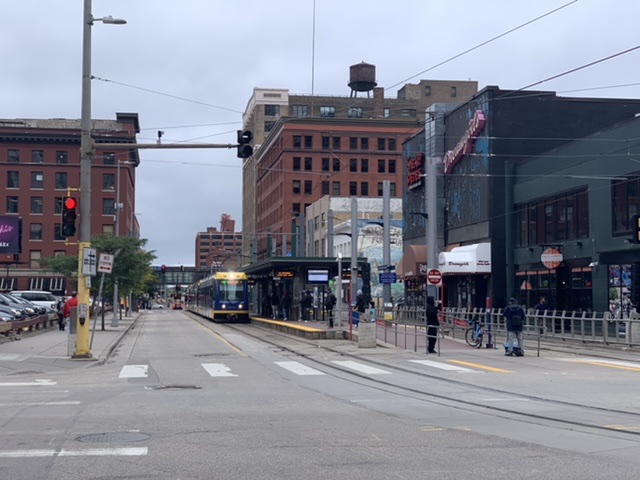 For the neighborhood of Downtown West, which includes the theater district and entertainment spots along 1st Ave N and Hennepin Ave, violent crime has risen 69 percent over 11 years, although this year is lower than the peak in 2017. The Census Bureau does not have yearly population estimates for neighborhoods, but the Minneapolis Downtown Council estimates that the greater Downtown area has a residential population of 49,781, a 56 percent increase in population since 2006. Combine those two numbers, and it’s clear that crime is rising at a faster rate than would be expected with the population increase.

What can we do to address Downtown crime, then?

In my conversations with police in the First Precinct, which covers Downtown, the three investments that would help them the most on the margin would be youth outreach (such as YouthLink), homeless outreach (such as St. Stephen’s Human Services), and mental health teams that combine the skills of mental health professionals and police.

Right now, 70 percent of sworn officers are part of the “biddable” part of the staffing model for Minneapolis police. This means that all the specialized services and neighborhood beat cops that residents and local businesses are asking for are capped at about 30 percent of the model. 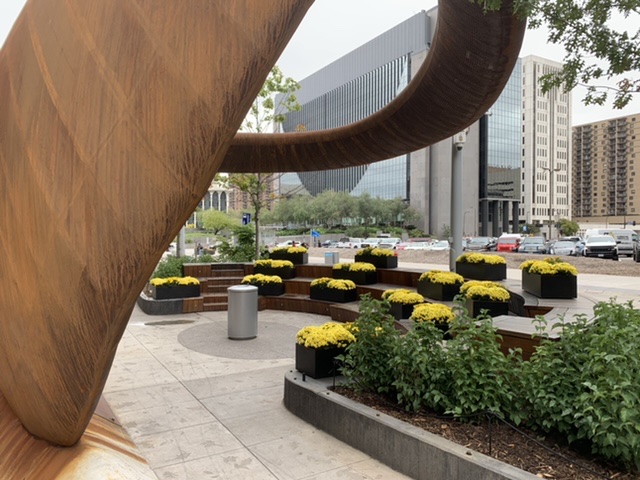 My take, as a Downtown resident, is that we need to approach this challenge with a “safety beyond policing” mentality. The city can invest in youth outreach and homeless outreach without increasing police staffing levels. We can also make real progress on a better solution to bar close that increases safety for the public and police. We have been debating bar close for years, and little has been done to address the structural incentives that make that time of the night dangerous.

In this conversation, it is important to have your voice heard. Sending an email or giving a call to your council member increases your power. Show up for neighborhood meetings and show up with the statistics for your neighborhood over the past 11 years. The facts may surprise people who have biases shaped by local news, or they may show, like in Downtown West, that there has been a real, sustained increase in crime.

What does crime look like in your neighborhood? What solutions would you like as a resident, and what do you hear from your local police and outreach workers? Share your stories and your insights in the comments.