Some weeks ago, Hennepin County Commissioner Mike Opat and a team of architects unveiled a bold and expensive new idea for Minneapolis’ Mississippi riverfront. The plan received a warm reception from Chamber of Commerce and Editorial Board types, but a more lukewarm response among the two groups of people whose opinions I most often seek: twitter urbanists and Star Tribune comment-writers.

There are two big problems with the “Wishbone” bridge idea. The first is that it doesn’t seem to fill a true need. Instead, it would duplicate an experience that is already available in various flavors on the Stone Arch Bridge, the Central Avenue Bridge, Nicollet Island, and Water Power Park. The second is the cost. Estimates have run from $50-100 million, and even that wide a range is unreliable. At a time when so many other priorities remain underfunded (and new priorities are emerging in the wake of a global pandemic), it seems obscene to spend so much on a rather obvious attempt to get publicity from tourist publications.

All of this being said, I don’t think that the impulse behind this scheme should be entirely dismissed. While there is a weary familiarity when yet another politician proposes a local version of New York’s High Line, some of the components are sound. Minneapolis and St. Paul are wonderful cities that have struggled to establish an identity, or earn the kind of national attention that helps draw tourist dollars and attract talented workers. When a family with airline miles or a job seeker with an offer imagines themselves in Minneapolis, the image of the city that rises to mind is more likely to be Jerry Lundegaard struggling to scrape ice off his window than a leisurely summer stroll across the stone arches. Maybe it would or maybe it wouldn’t succeed, but the underlying yearning behind the “Wishbone” is to build something Of Note, something that will make a new image of the city. (A really close parallel is the “Floating Bridge” in Moscow’s new Zaryadye Park). People keep proposing takes on the High Line, because it’s a deservedly world-famous urban space. A handful of weeks ago, I wrote about the potential to build a world class linear park in St. Paul, and I don’t think that’s exactly a bad idea for Minneapolis to shoot for something similar—this just isn’t it.

But I can think of a different concept that’s more novel than the Wishbone, would cost a lot less money, and would accomplish the same goals with broader benefits. 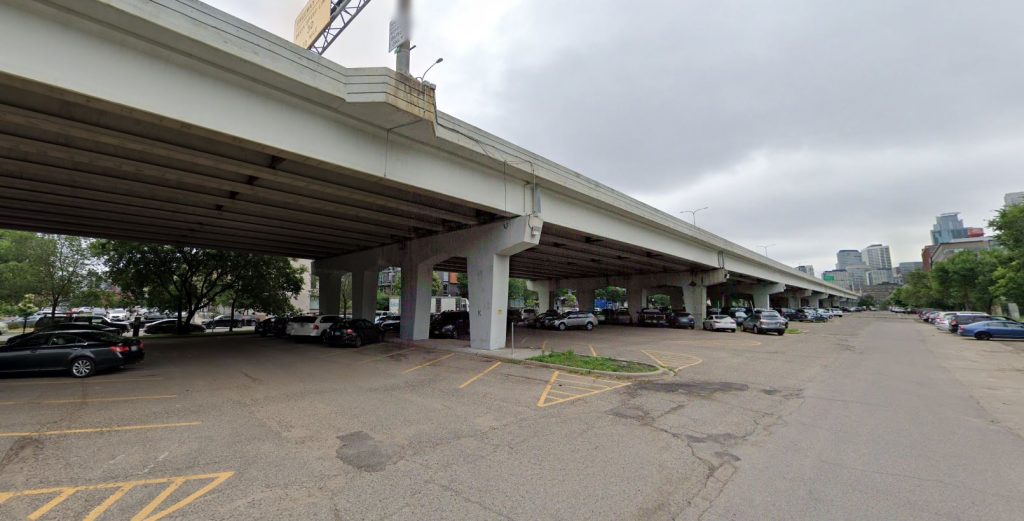 This sucks, but it doesn’t have to.

Here and now in 2020, the entrance and exit ramps that connect 3rd and 4th Streets to I-94 by crossing the North Loop on viaducts do not exactly make a whole lot of sense. When the viaducts were built, the North Loop wasn’t even known by that name, and it was a mostly derelict area that few had second thoughts about crossing over. But today, they form a tough edge that hems in the most dynamic neighborhood in the city, stymieing development west of N 4th Street. Only the few blocks surrounding Target Field Station make for an exception. It’s one of the Twin Cities’ cleanest examples of how unsightly and inactive highway infrastructure can divide neighborhoods—or more accurately in this case, depress their ability to ever grow.

While the area around the North Loop viaducts transforms, the transportation justification of the viaducts continues to erode. When white collar offices were tightly clustered between Hennepin and 4th Avenues, it surely made a good bit of sense to whisk suburban workers to this area via an elevated shortcut. Yet the geography of jobs in downtown is increasingly different. Last year, one business headquartered in the North Loop achieved a $1 billion valuation. A brand new ten-story office building recently opened in the area and a fourteen story tower is proposed. Instead of making a direct connection between highway and jobs in the CBD, the North Loop viaducts now seem somewhat of an overshoot.

Then there’s the problem of the land that the viaducts sit on themselves. Highways occupy some of the most valuable urban land in America. While it wasn’t the case when they were built, the North Loop viaducts now make a strong claim for the piece of highway infrastructure with the biggest opportunity cost in the Twin Cities. According to Hennepin County, the assessed value of 725 3rd St N, a parking lot east of the viaduct on which an apartment building recently started construction, is $65 per square foot. The assessed value of 800 5th St N, a parking lot and junkyard west of the viaduct, is $35 per square foot. It would be well worth computing the value that Minneapolis and Hennepin County could unlock from the viaduct right-of-way itself and adjacent properties, if they were to disappear.

Plenty of people have been calling for years for exactly that outcome. Certainly the easiest and cleanest solution to the problems caused by this relic is to tear it down and not rebuild it. The highway could instead be accessed at N 10th Ave, and the land could then be sold to developers to justify the investment. If this were a course of action proposed tomorrow, it would certainly get my support.

But the North Loop viaducts, for all of their ill effects, have scraps of potential from which a more elegant solution could be assembled. Here’s an alternate proposal: tear down just half of the viaduct, and use the rest for good.

Adding Value To The North Loop

Cities around the world are always saddled with out-of-fashion infrastructure, and constantly made to figure out what to do with it. Sometimes they choose to tear it down, for good or ill. Sometimes they choose to hide it, with results that may vary. But by far the most exciting results come when cities reclaim the infrastructure for something better. New York’s High Line, Atlanta’s BeltLine, Paris’ Promenade Plantée, and Seoul’s Cheonggyecheon are all famous demonstrations of the various ways that obsolete infrastructure can be transformed into places for people.

Such an opportunity exists with the North Loop viaducts. From 2nd to 10th Avenue, the viaducts stretch two thirds of a mile, crossing over the railroad tracks and floating past the third floors of North Loop condos, apartments, and offices. On the approach into the city, they provide a fantastic view of the downtown skyline. The eastern viaduct also already provides a much needed pedestrian connection to fill what would otherwise be a gap between Washington Avenue and 5th Street, but it’s an exposed and unpleasant walk. Yet if people could walk on the viaducts without the road and wind of freeway traffic, they surely would. If this elevated space were transformed into an elevated park, with trees, flowers, paths, and benches, the effect would be transformational.

But revitalizing the viaducts as a linear park is not on its own an unvarnished win, because it would not help reclaim new land for development, nor would it ameliorate the barrier effect that is caused by the hulking highway overpass. It is fortunate, then, that the highway viaducts are two separate structures. This presents an elegant and obvious compromise. The western viaduct could be removed entirely, while the eastern viaduct is retained and greened. This would leave a developable gap of over 100 feet between the parcels that front 5th Street and the remaining viaduct.

These buildings would face the new elevated park, adding value to what they lease or sell. With just a single viaduct of only 50 feet in width, the gloomy atmosphere underneath would be lessened and the new buildings that open onto it would have a strong incentive to further improve its look, feel, and amenities. Rethinking the surface of the I-94 viaducts as parkland might provide the nudge to rethink the underbelly of them as well, with opportunities for dog parks, skate parks, basketball, futsal, and other activities besides solely parking.

By taking an increasingly-troublesome piece of transportation infrastructure and re-conceiving it as an amenity, Minneapolis would create community and economic value where there is now only a cost. It would create a joyful link between separate parts of the downtown area. It would add a ribbon of green space to a place where there is now little. Finally, it would (ATTN: Mike Opat) create a landmark piece of urban and landscape design that would draw attention from across the country, and maybe even the world.

How To Make It Happen

One way to start might be to put forward the viaducts as a location for an Open Streets festival. While Open Streets events tend to succeed on the basis of the participation of local community institutions, the sheer novelty of being able to walk on the North Loop viaducts for a weekend afternoon would be a draw on its own. It might take some creative rope and pulley systems to make it work, but there could still be a good space for vendors like the tenants of the nearby Graze Food Hall and Modist, Fulton, and Inbound Brewing. There would also be a great opportunity to get the adjacent Twins, Wolves, and Lynx teams to participate. How many kids would pass up the opportunity to shoot hoops or hit balls from the advantage of being thirty feet in the air? 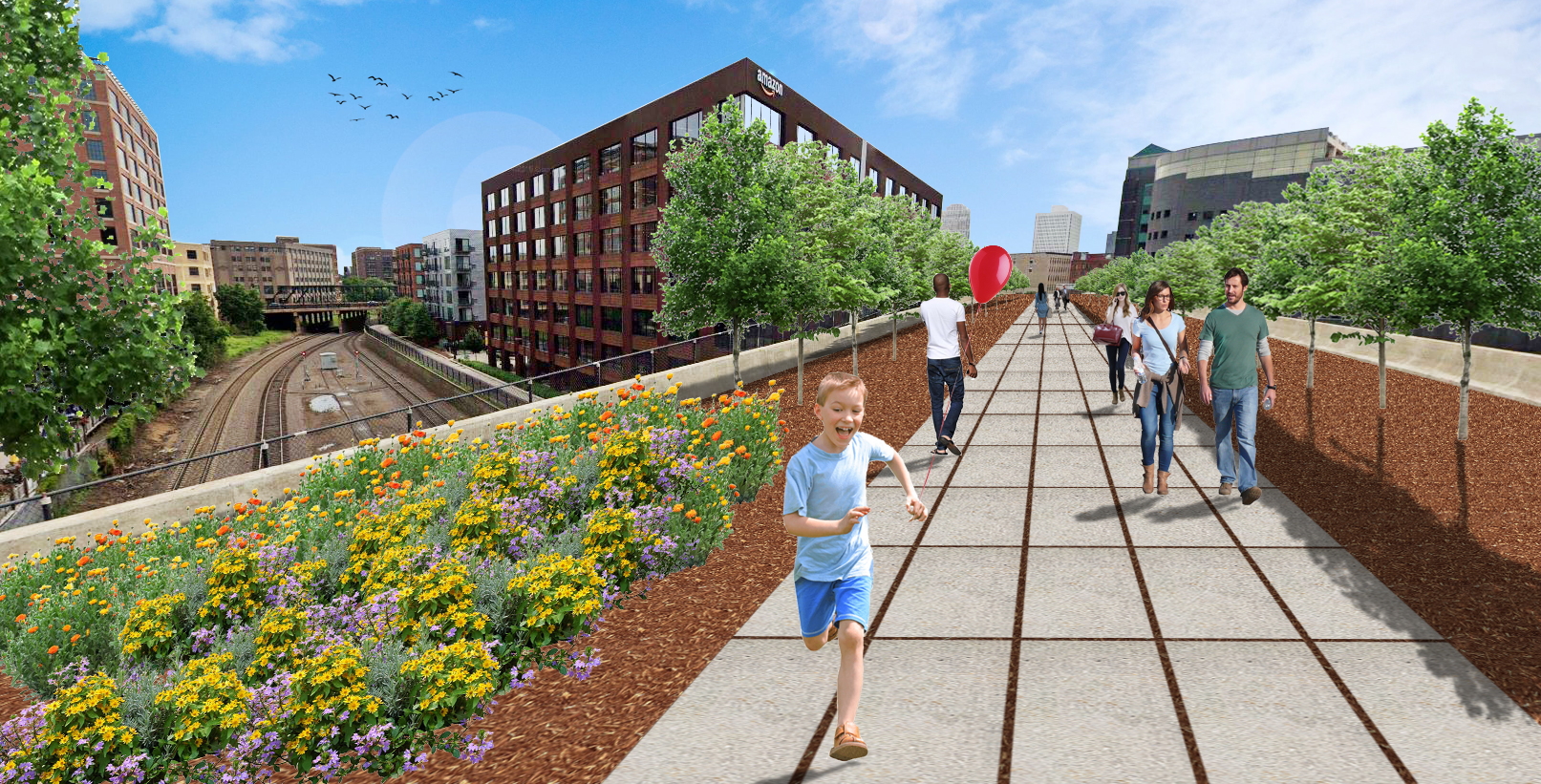 Why not? Full size version here.

Start by establishing the idea of the viaducts as a place where people might someday belong, not just cars. From there, the fate of the viaducts should be woven into the scope of the Highway 252/I-94 project that MnDOT is embarking upon. That is the nearest opportunity to rebuild the entry and exit ramps for the highway, potentially feeding them onto 10th Avenue instead. More traffic would land on North Loop streets, but at slow neighborhood speeds, and with ample opportunity to become accustomed to North Loop retail options. Then, as a part of that larger project, the viaducts could be severed, one could be torn down, and the untapped value of the area could start paying dividends for the state, city, and neighborhood, as construction of the park commences.

These are weird and fraught times. It can be difficult sometimes to think about the future, when so much about the next month or two is completely uncertain. But it is more important than ever, in times like this, to hold onto dreams. Here, in the heart of Minneapolis, is an opportunity to turn a frog into a prince, perhaps it can be something to look forward to.