Why eat weeds? A weed is just a plant in the wrong spot, the saying goes. It might also just be a plant we haven’t sufficiently appreciated yet.

Eating weeds fundamentally changes our relationship to the world around us. It requires a shift of perspective that is a quiet revolt against the 20th-century ideals of mastery over nature. The natural world is a complicated place, and to eat a plant that you’ve passed by day after day is to gain a glimpse into those depths.

Weeds are free, low-input and often readily available in places that may not have access to food gardens. A weed is the easiest meal you will ever gather. You didn’t go to a garden center to buy seeds or plants, prep a garden bed, dig little holes to carefully plant, mulch, water, fertilize, weed (ha!), fight pests and so on. You just saw a plant and said, “I’m going to eat that!”

The weeds described below are all commonly found in the Twin Cities and are relatively easy to identify and harvest. Except where noted, I have personally tried harvesting and eating them. I will share my notes on good uses and my opinion of their usefulness.

Lamb’s quarter is my No. 1 edible weed. It’s easy to cook with, mild tasting and exceptionally nutritious — reportedly better for you than spinach or kale.

Lamb’s quarter loves to colonize unattended patches of bare dirt. If you let it go to seed once, you’ll have a reliable supply in future years. It’s easy to spot this plant once you learn to recognize the shape and dusty appearance of the leaves. Various relatives in the Chenopodium family have similar appearances. Luckily, many of them are also edible. The plant should not have a strong odor. If it smells of varnish, don’t eat it.

The leaves have a mild taste and can be used like spinach: wilted and seasoned, or added to any cooked dish. They also can be eaten fresh and do well in salads and sandwiches. Younger leaves have a better texture for fresh eating. A distinctive feature of Chenopodiums is a powdery coating of pollen on the underside of the leaves. It’s safe to leave this on, but I prefer to wash it off for fresh eating. Simply fill a bowl with water and swish the stalks around vigorously before removing the leaves.

The leaves can be dried for later use, and the seeds can be cooked and eaten, but I have not tried these preparations.

Everyone is familiar with the irrepressible dandelion. Many of us have cursed their tenacity at one time or another. However, this weed also has a long and fruitful history as food. In fact, it was originally imported to the Americas as a food crop. Dandelions are often found in lawns, as well as anywhere else you can imagine.

All parts of the dandelion are edible and their leaves are one of the first greens available in early spring. They are also at their most tender and tasty when they are young. The older leaves have a less appealing texture and may be overly bitter, so harvest early or cut back the entire plant and wait for it to re-grow new leaves. The leaves are nutritious but do have a strong, somewhat bitter flavor. They can add a nice punch to a salad when mixed with other greens. If you’re using entirely dandelion greens, dress with a strong vinaigrette to balance the flavors. I’ve read that dandelion leaves can be “blanched” by covering them with a flower pot to exclude light until harvesting, leaving the leaves tender and less bitter. I haven’t tried it, but I can imagine it would work nicely.

The dandelion flower can be fried or cooked in a number of other ways. Perhaps the most enticing preparation is dandelion wine. If you don’t feel like making it yourself, pick up a bottle from the friendly local Urban Forage Winery.

Purslane is widely eaten in other countries, which makes me think they know something we don’t know. It has impressive nutritional properties and is a tough plant, often growing in places like compacted dirt or sidewalk cracks where no other plant has gained a foothold.

Purslane bears a resemblance to plants in the spurge family, which are inedible and potentially poisonous. Prostrate Spurge is common around here. Purslane has glossier and more succulent leaves and a different leaf configuration than spurge. If you have any doubt, break a stem and check the sap. Purslane has clear sap while spurge has white sap.

Purslane can be eaten raw or cooked. Fresh, it has a gentle sour flavor and a crisp juicy texture. It makes a good addition to salads of any sort. I imagine it would be good cooked in a soup where it is sometimes used as a thickener. Purslane, however, can be time-consuming to prepare. Picking off the tiny leaves one by one is slow and tedious. Perhaps I should try chopping it stems and all. 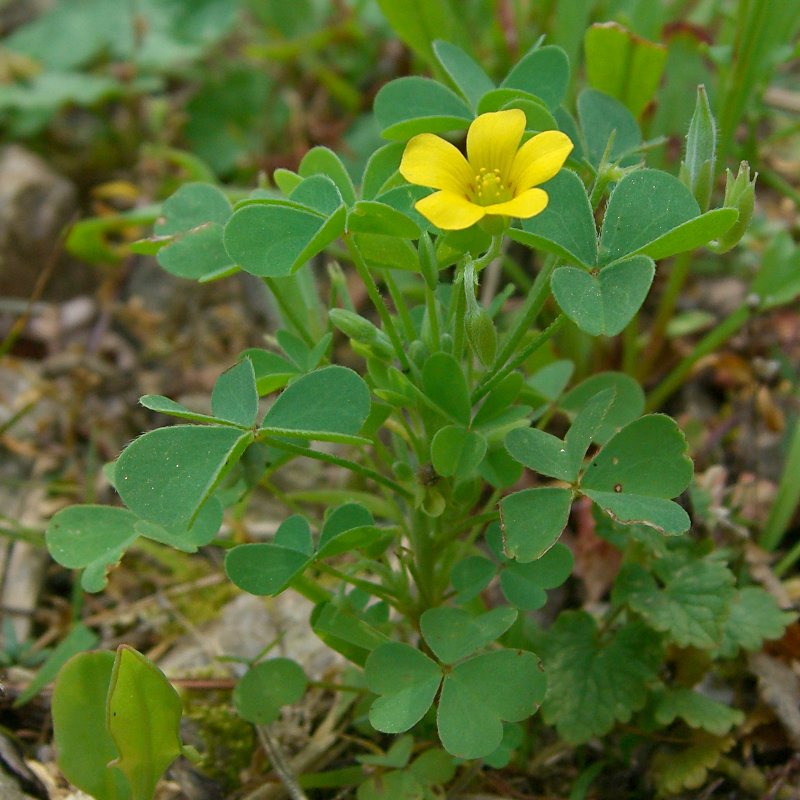 Wood sorrel has leaves that resemble clover, but it stands more upright and the flowers are different. Wood sorrel readily volunteers anywhere there’s loose soil. I often find it tucked away in a quiet shady corner, though it will grow in sun, too.

Eaten fresh, the leave have a lemony tang that can brighten a salad. If you apply heat to them (even residual heat, like sprinkling them over hot food) they will instantly wilt into an unattractive brown goo. I find wood sorrel, even more so than purslane, to be too great a time investment for too little return, so I don’t often use it. It can be fun to grab a leaf to nibble while you’re working outside, though. Picking and eating random plant matter as you’re out and about is also a fun way to unnerve your companions.

Wild violets are a ubiquitous plant around here, happily popping up in any unattended corner. I have not tried eating them, but the leaves and flowers are reported to be edible raw or cooked.

Even if you aren’t going to eat them, consider letting your violets grow. They are a native plant, and the pretty purple flowers are beneficial to pollinators who need food sources in spring when little else is blooming.

This technically isn’t a weed, since ferns don’t often show up in city limits without someone intentionally putting them there. They spread vigorously enough, however, that you may need to control their expansion. Luckily, you can eat them!

Ferns are often used for landscaping in shady yards and around house foundations. Ostrich ferns are the most common type found around here and are the most popular fiddlehead for eating. Some other types of ferns are edible, but some are not. You can identify an ostrich fern by checking the stem, which should have a U-shaped indentation like a stalk of celery.

The edible parts of ostrich ferns are the “fiddleheads” that emerge in early spring. Pick them while they’re still tightly curled and cook before eating. Treat them like asparagus or green beans. A simple preparation sauteed or steamed with a little oil and salt is delicious, or use them as an ingredient in cooked dishes.

Go forth and eat weeds! I hope I’ve inspired you to try eating a weed or two. Many other common weeds can be eaten, such as sow thistle and garlic mustard. It’s a wide world out there, and humans’ relationship to food goes much deeper than what we see on supermarket shelves.

2 thoughts on “Fun Weeds You Can Eat”