Many people were excited to see the new concrete-protected bike lanes being installed on Blaisdell Avenue South between 28th Street and 32nd Street this past fall as part of the Whittier-Lyndale bikeway project.

Unfortunately, delays have plagued this project. Public Works initially committed to delivering the entire length of lanes during the 2021 construction season. The department got off to a late start, however, and ended up splitting the project into two phases to be delivered across 2021 and 2022. People who have been advocating for a safe way to bicycle between south Minneapolis and downtown since 2018 were understandably frustrated by that delay, but it was understandable given the pandemic.

What’s not understandable is Public Works’ rationale for never opening up the newly concrete-protected bike lanes between 28th and 32nd streets, and instead forcing bicyclists to ride in a car-traffic lane for four blocks. This has been happening since October 1, 2021. 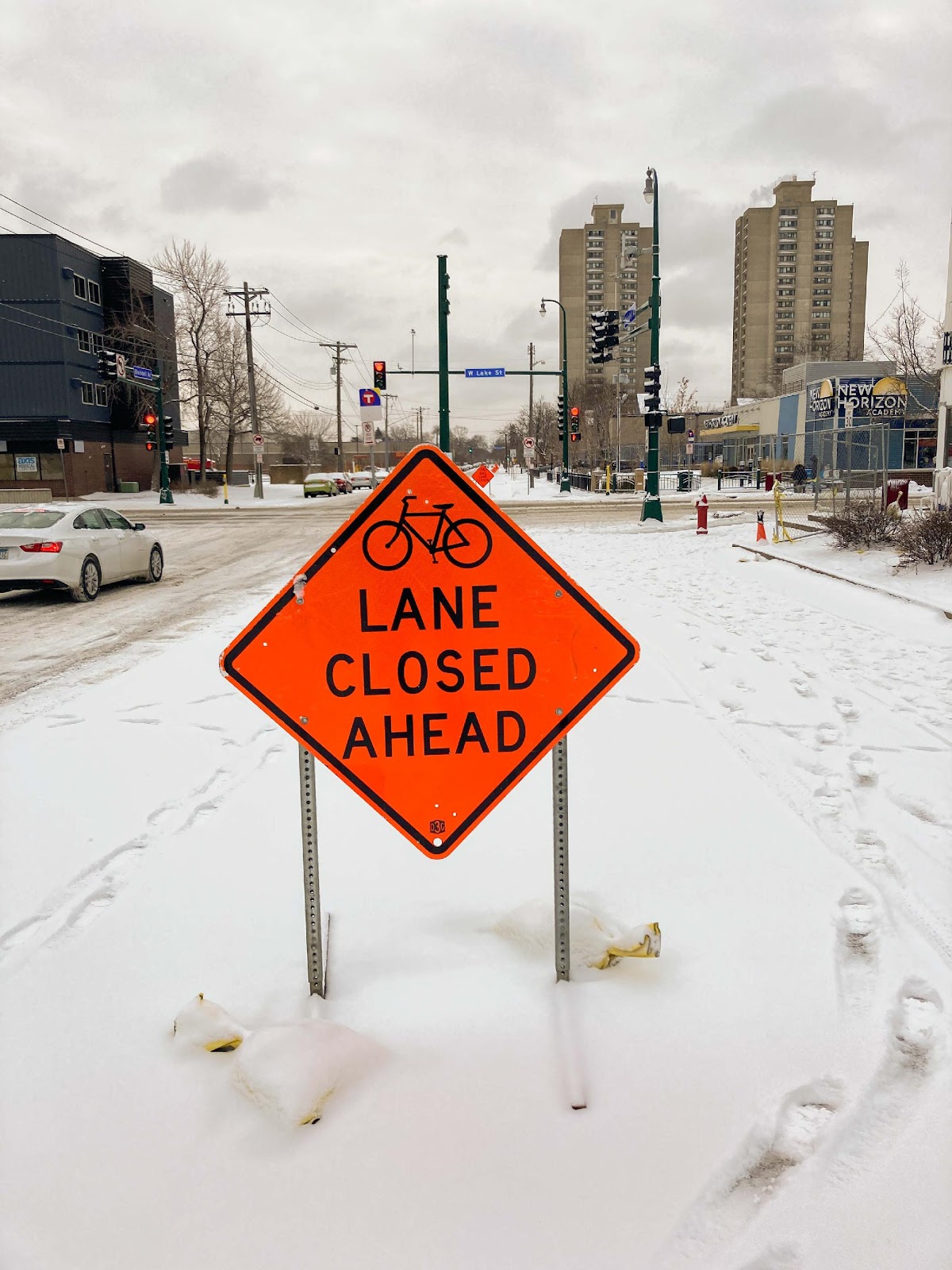 This decision directly conflicts with the updated Complete Streets Policy that the City Council adopted in late 2021. That policy states that during street construction:

“Impacts to pedestrians, bicyclists and transit users will be limited to the extent possible during construction. Safe, convenient, and connected detours will be established for people as they walk, take transit, and bicycle when those networks are temporarily interrupted by construction work.”

The Public Works representative responsible for closing this section of bike lane has stated that they cannot open it until the weather warms up enough to fully paint the stripes for the bike lanes between 28th and 32nd streets. Otherwise, automobile drivers might become confused and drive in the protected bike lanes.

Here’s what this Public Works staffer couldn’t answer: How does the absence of green paint in this concrete-protected bike lane make it more dangerous to my safety than the alternative — me having to bike in an automobile traffic lane with my children?

In the near term: Public Works should open this portion of the Whittier-Lyndale bikeway and plow it for the rest of the winter. A solution that temporarily keeps drivers out of the concrete-protected bike lane does not necessarily require green paint to be applied to the asphalt. Since I am neither a trained traffic engineer nor a lawyer, however, I can’t say which solutions would prevent the city from being found liable if a car driver mistakenly drove down this bike lane and struck a bicyclist.

In the long term: Public Works needs to put vulnerable road users first on Minneapolis streets — and follow its Complete Streets Policy every time it performs work on sidewalks, crosswalks or bike lanes.

Telling my family and friends that we should just take another route does not comply with Complete Streets and seems to value easy solutions for city staffers more than the lives of people who use city infrastructure in multimodal ways.

Want to Take Action to Fix This Problem?

Email your City Councilmember and the staff associated with this project. Let them know that you’re counting on them to keep you safe on our streets year-round and to hold staff accountable to following city policy.