Recently, Portland, Oregon housing advocate Aaron Brown noticed that yet another new apartment building in Portland was going up next to a freeway. This is a real problem for the future residents of those apartments, who must deal with the air pollution, noise pollution and disruption to the urban fabric that a freeway creates.

More broadly, it seems like a lot of housing gets built on all kinds of busy streets, which bear the same downsides (if less severe) as freeways. A year ago, Slate columnist Henry Grabar argued that we must “upzone the side streets,” pointing out that most American cities only zone for dense construction on the main arterial streets, restricting apartment-dwellers to some of the worst streets to live on.

St. Paul is no exception. Large swaths of the city are zoned only for single-unit detached housing. More heavily-trafficked streets carve through these quieter residential areas, and they are almost always the only corridors zoned for more dense forms of housing. In the primarily single-family neighborhood where I live in St. Paul, new (mostly rental) multifamily housing does get built, but primarily on streets like Snelling and Marshall avenues. Meanwhile, it’s rare to see any new housing going up on the side streets.

So I took Brown up on his request for a more precise analysis of this question, taking a look at St. Paul. The Metropolitan Council has an open-access dataset on all of the housing permits built in our seven-county metropolitan area from 2009 to 2018. They also have a dataset on roads in the metro area, classifying different roads by their level of traffic intensity. With a bit of GIS work, we can figure out just how much housing is getting built near our major streets and freeways. 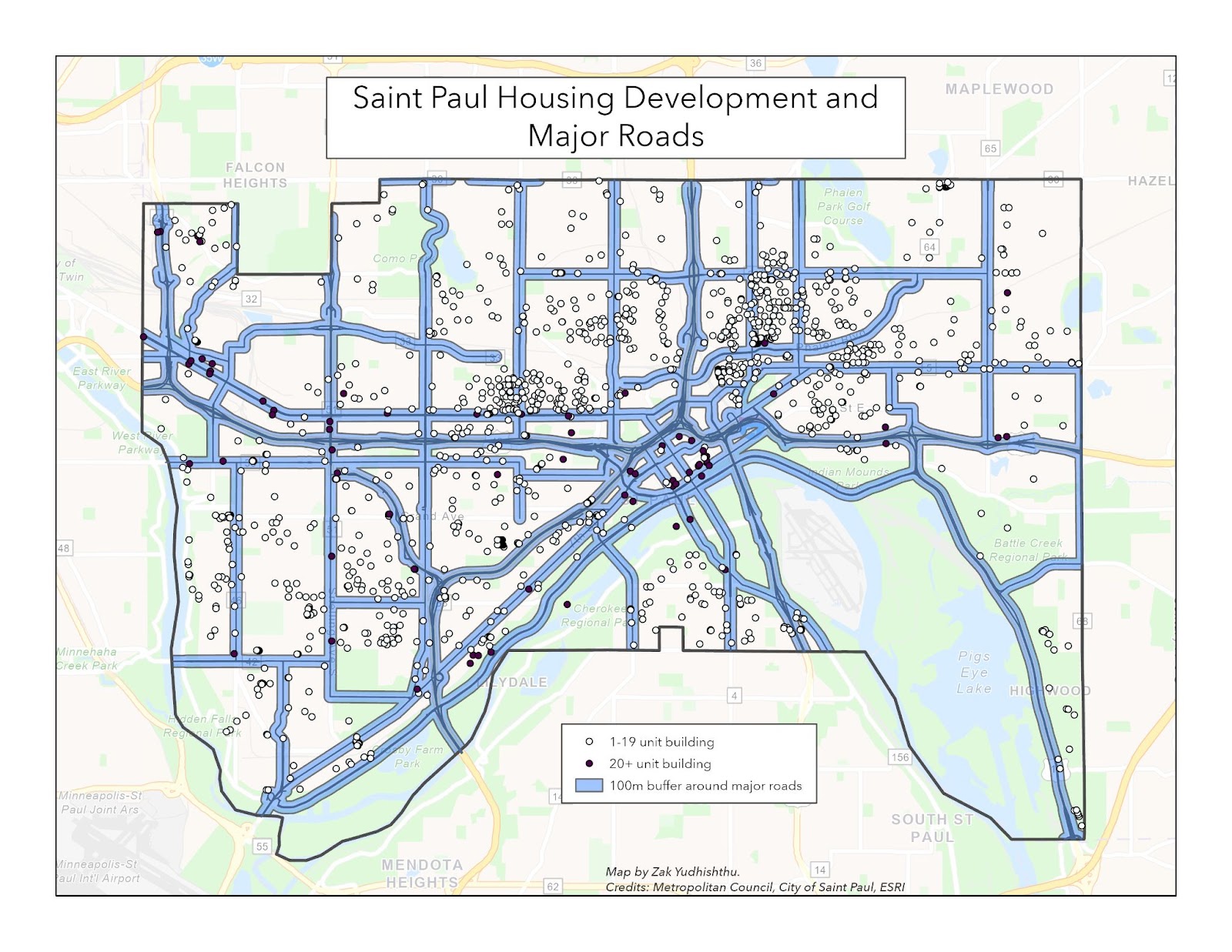 In my analysis, I classified a building as near a major street if it was within 100 meters of a street classified as principal arterial, minor augmentor or minor reliever. This includes some of St. Paul’s most busy streets, like I-94 and University Avenue, as well as other large traffic corridors like Lexington Parkway and Kellogg Boulevard. It’s not immediately apparent that most of our housing is built on these streets when we look at the number of developments; from 2009 to 2018, 27.86% of housing projects in St. Paul were built along major streets. 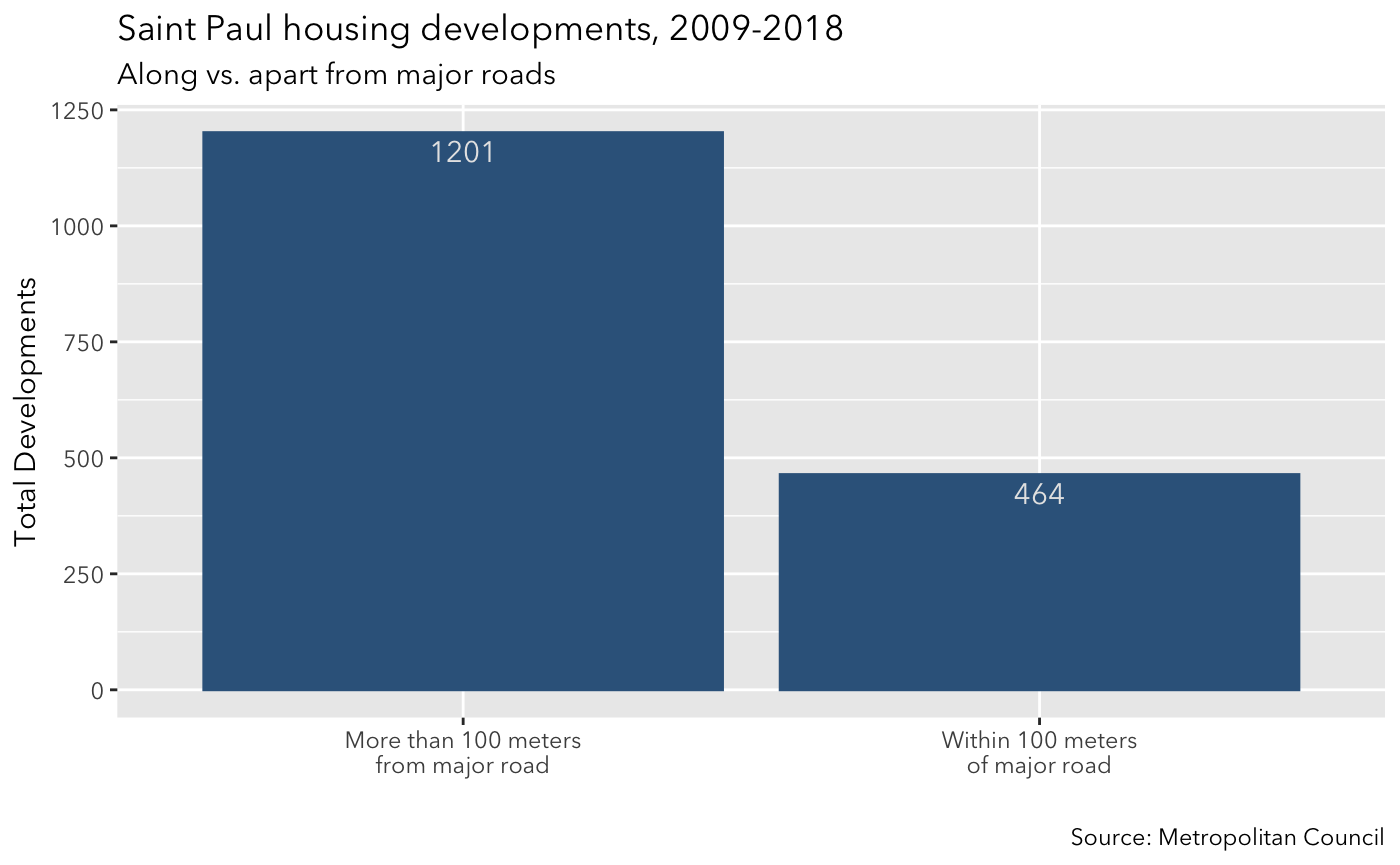 However, this isn’t representative of where most housing units were built, which is the more relevant statistic for understanding where St. Paulites live. As is visible in the above map, larger apartment buildings are far more likely to be built along major roads. Because such a large share of units are coming from multifamily housing projects, the majority of units (61.98%) are actually built within 100 meters of a major road. 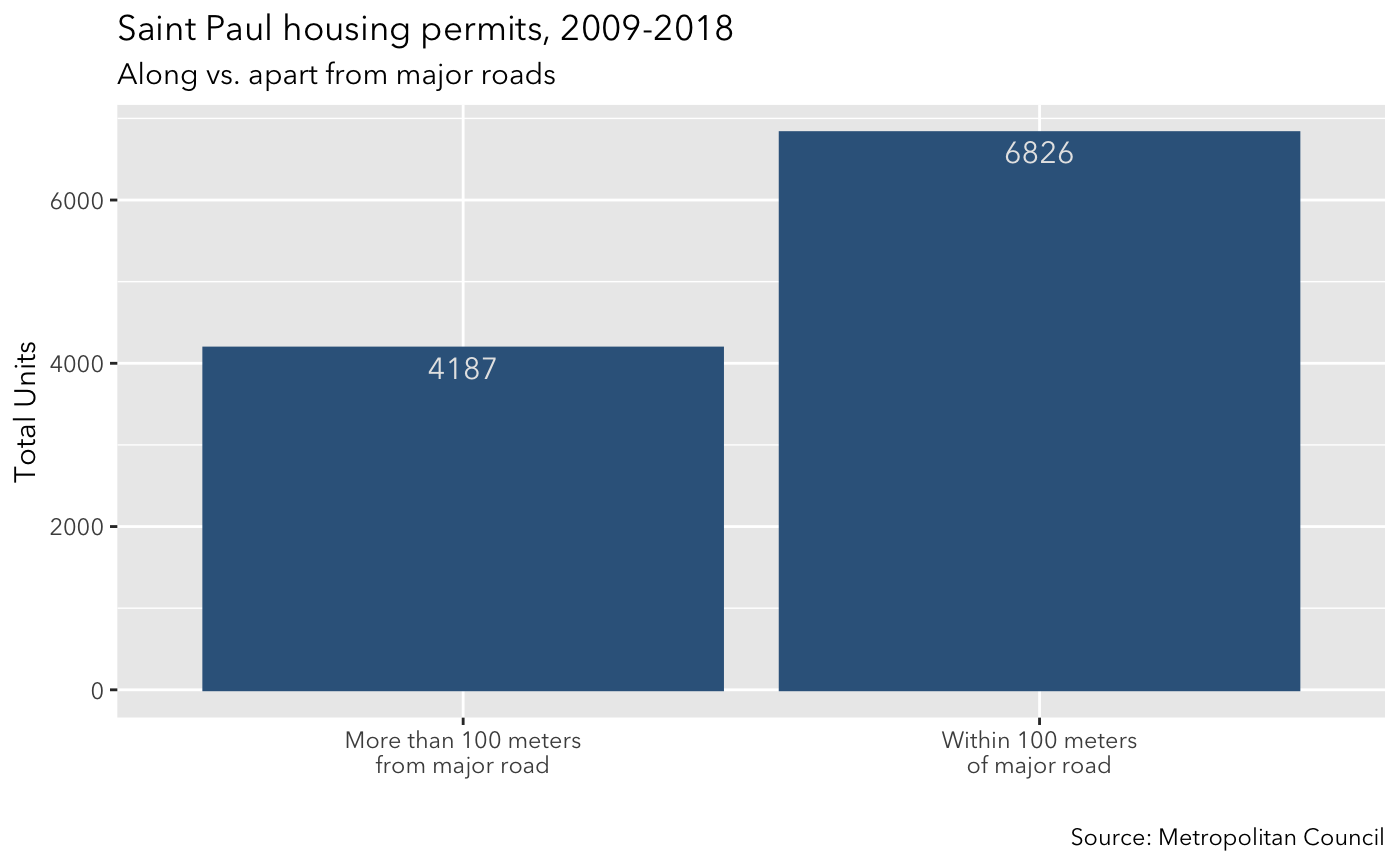 The chart below shows that nearly all of the units that are near busy streets are those in larger apartment buildings. This suggests that much of the problem comes from our policy of arterial-only zoning for large multifamily housing. 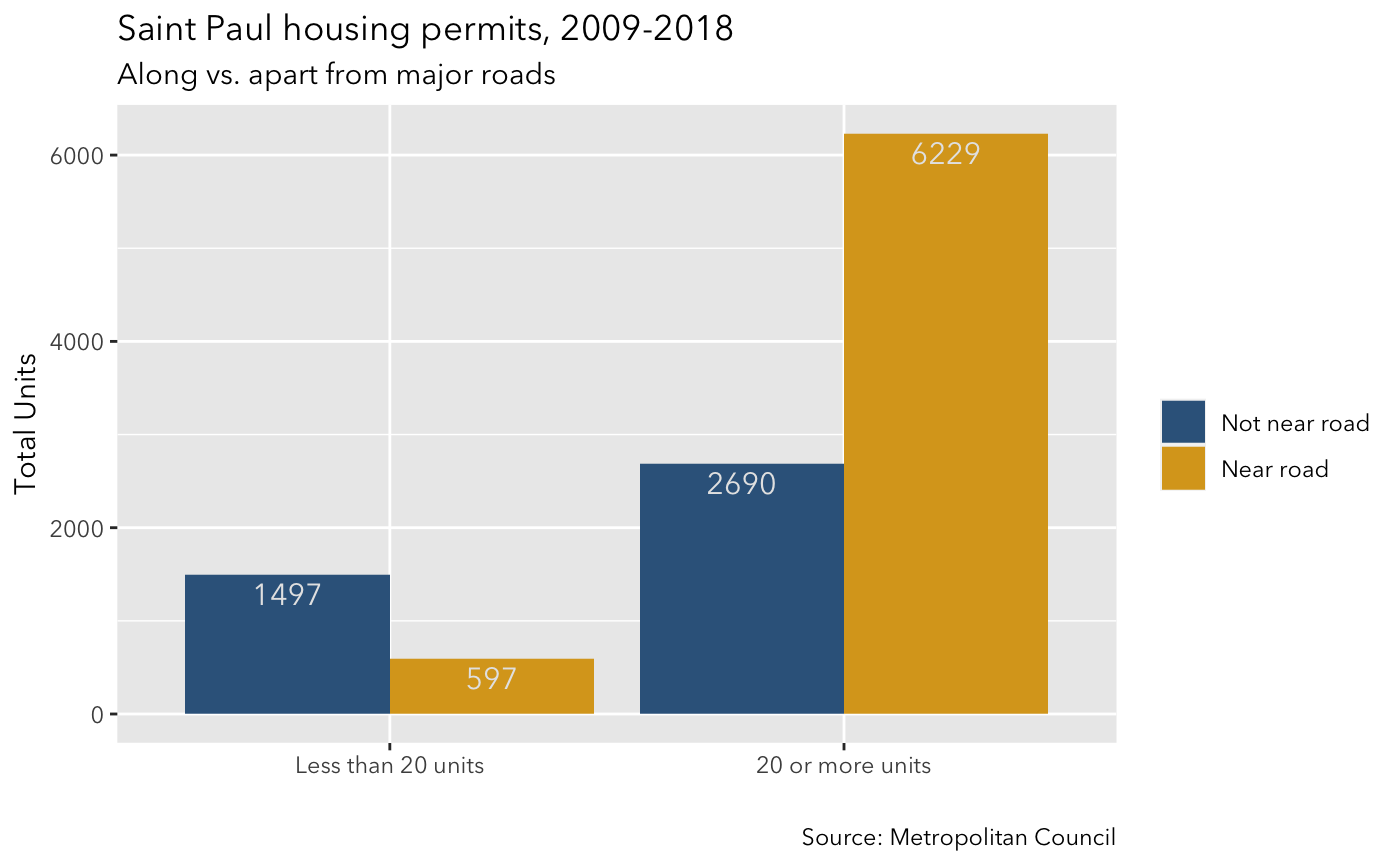 Another way to slice this is to look only at highways, but extend the buffer to a larger distance. I looked at how much housing was within 300 meters of highways, reflecting their more severe levels of pollution — a recent L.A. Times report showed air pollution from highways regularly traveling upwards of 1,000 feet (~300 meters). 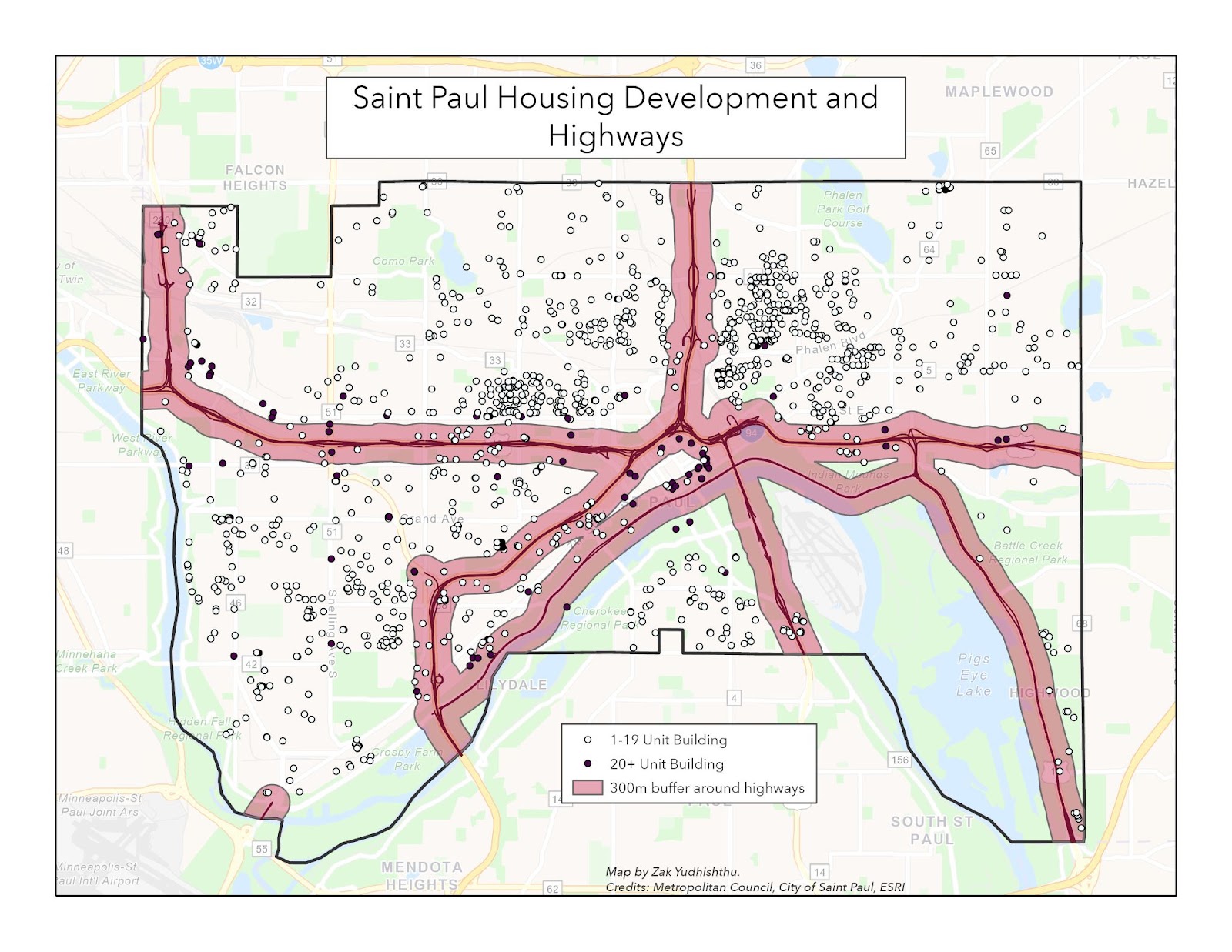 Just over 50% of dwelling units from 2009 to 2018 were within 300 meters of a freeway. And, once again, this is mostly due to the distribution of units from larger apartments. Visible in the map above and the second graph below, it is the units from large apartments that primarily end up next to freeways. 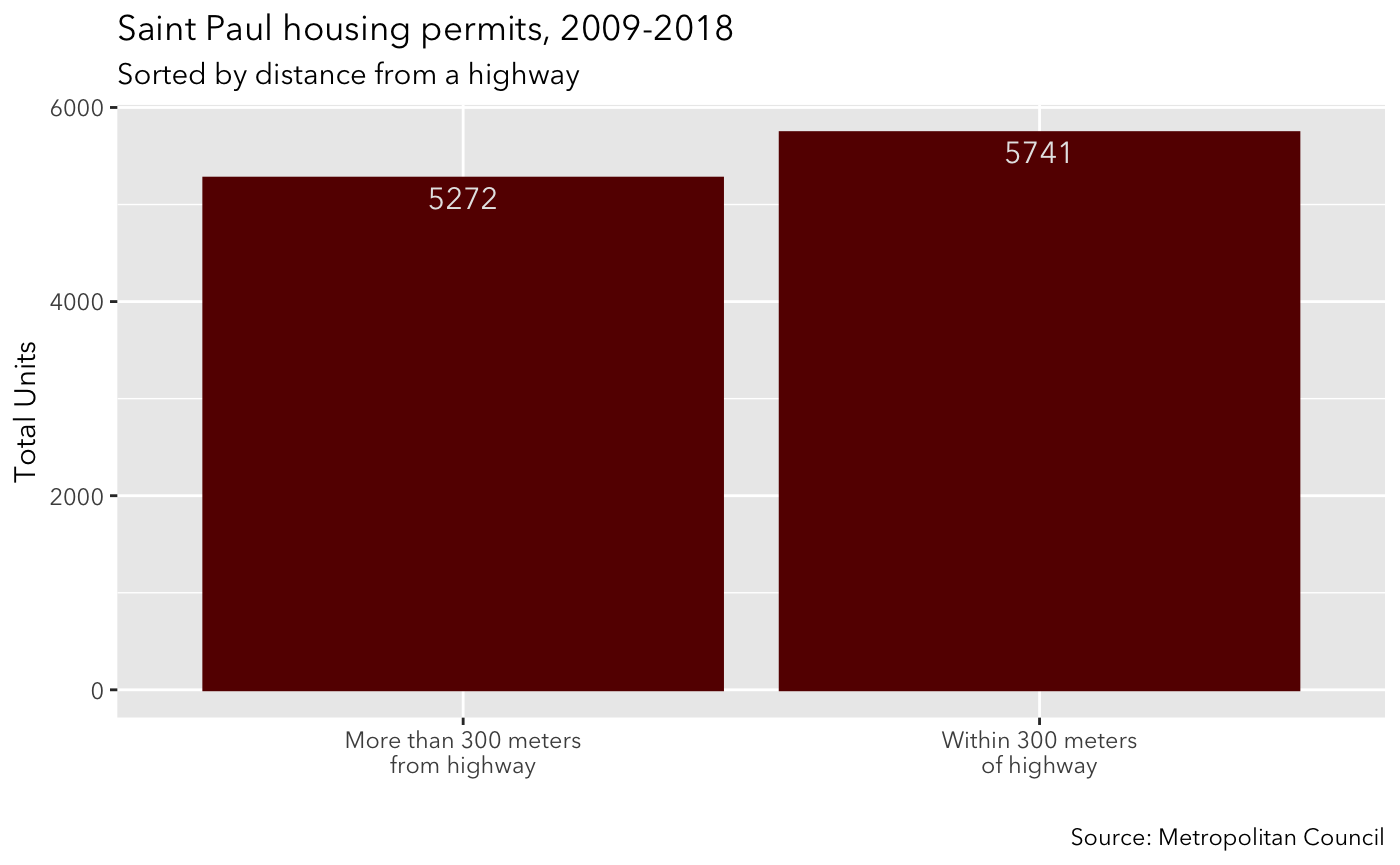 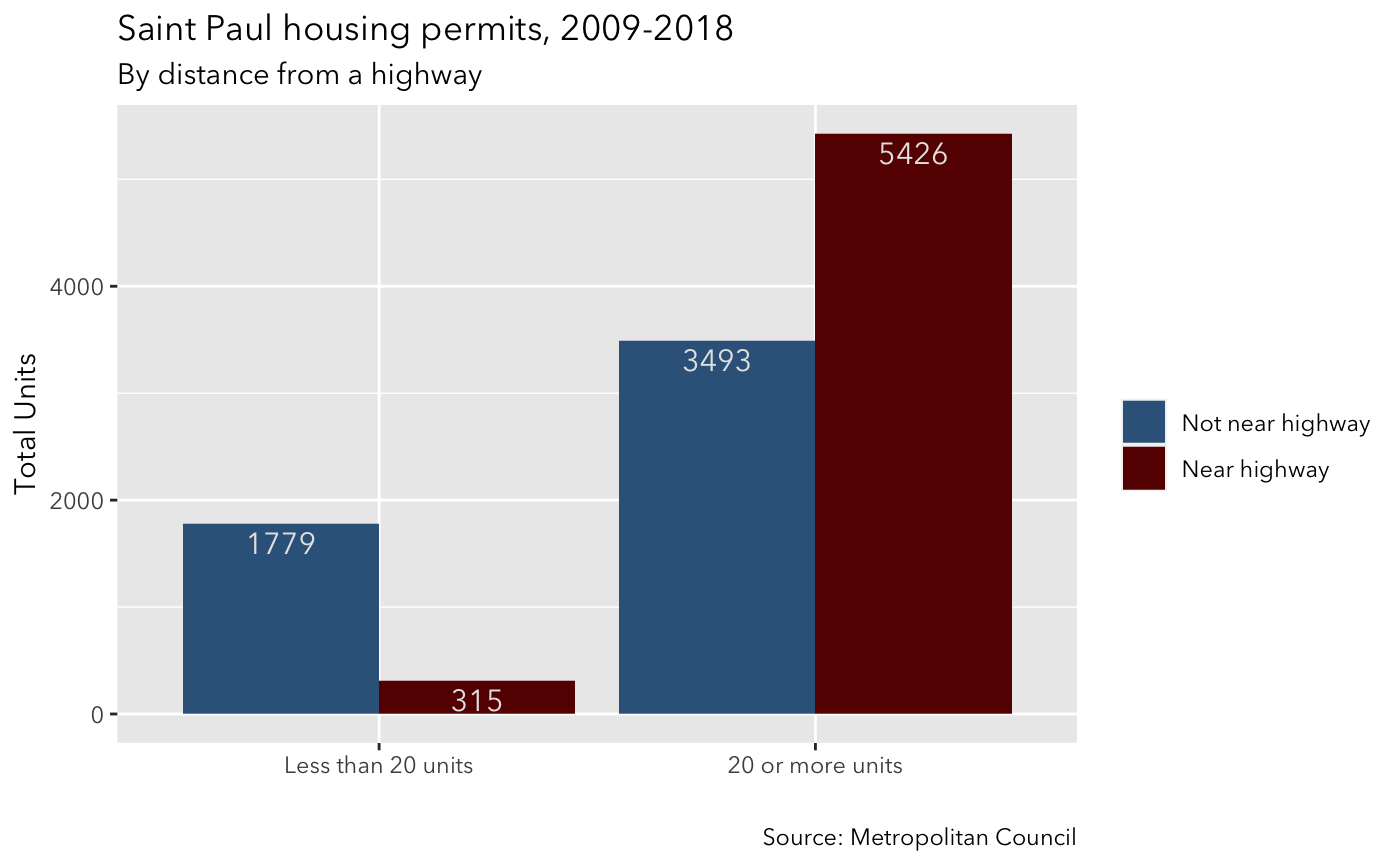 Returning to Henry Grabar’s argument, this is an injustice. It’s good to see new housing being built, but relegating those new residents to busy streets is what Daniel Oleksiuk calls “A Devil’s Bargain.” When we primarily build our new multifamily housing on main vehicle routes, we are ensuring that people who move into St. Paul’s newer and more energy-efficient housing — which is also much more likely to be rental housing — are also going to live on streets where the quality of life is worse. Along these busy streets, the air is dirtier, noise pollution is incessant, and the streets are dangerous for pedestrians and cyclists. The resulting impacts can be severe: highways cut locals’ access to amenities, while traffic-caused air pollution shortens life spans; traffic-caused noise pollution increases chances of developing various health problems, and busy intersections lead to dozens of deaths each decade in St. Paul.

Half of the problem is that so much car traffic guts through St. Paul. Our arterial street-centric multifamily zoning wouldn’t be so much of a problem if such streets had fewer cars going through their centers. With better transportation policies, we could reduce air and noise pollution, and living on busy streets near transit and amenities might become more desirable. Take I-94, for example: Living next to the huge freeway is a real problem, but living next to the Twin Cities Boulevard might not be so bad.

But we should push for change on multiple fronts and move beyond this system of shoving apartments onto main streets. Policies that end single-family zoning are a start, but widespread triplex or townhome legalization isn’t likely to substantially shift the composition and spatial distribution of housing units because most housing units come from very large buildings. To truly address this problem, we would need to allow for denser forms of housing across our cities — not just in downtown, and not just on main streets.

And ideally, supporting more density across St. Paul could create a virtuous cycle, moving residents away from main corridors while providing the enabling conditions for better transit service and shorter trips for work and errands, which would further reduce the harms created by traffic corridors.

Such changes are urgent. Until we can improve our roads and disperse our housing, we are confining thousands of residents to substantial reductions in their quality of life.

Photo at top: A rendering of a development on Snelling Avenue near Allianz Field, courtesy of Minneapolis/St. Paul Business Journal

16 thoughts on “St. Paul and the Problem of Arterial-Only Housing Development”