Big changes are coming up at Metro Transit, which in Minnesota means big meetings.  Next week will be the first meetings on the new Rapid Bus concept, aka Baby BRT.  I wrote about this last fall on streets.mn’s predecessor site, TC Streets for People, and twice on my personal blog.  The following week will see the first meetings on bus route restructuring around Central LRT.  Specific meeting dates and times are at the bottom of this post; I’ll take a moment first to summarize each issue and throw in an opinion or two.

Throw Rapid under the Bus? 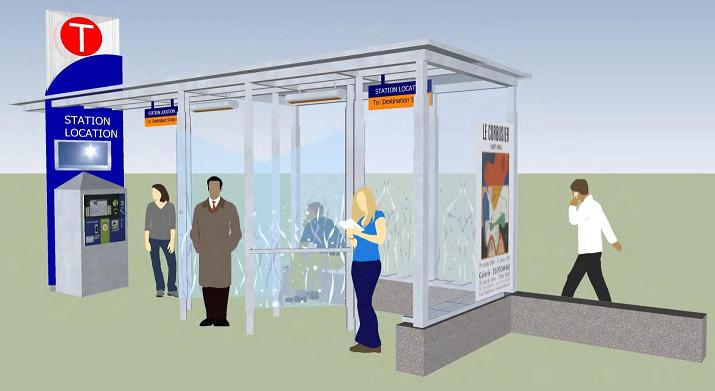 Looks so good you could just move in

When last we left Rapid Bus, there were 11 routes that were candidates for enhancements, and the twin goals of the study were to determine (a) which routes were viable for enhancement and (b) what those enhancements would be.  Around the middle of January, the results of the study were presented to the Met Council’s Transportation Committee and published on Metro Transit’s website.  As someone who was hoping that Rapid Bus would be transformational for transit in the Twin Cities, I have to admit I was a bit disappointed.

To be fair, they have gone full-force with the concept, committing to such appealing features as:

(This info comes from Technical Memo #3, which provides much more detail for those who are interested.)

All that sounds great, except the study also whittled 11 candidate corridors down to just two finalists: Snelling, which the study claims could be implemented as soon as this year, and West 7th, which the study suggests delaying until 2014, or whenever Bloomington finishes its MOA-area road construction.  (These timing predictions are from Technical Memo #4.) 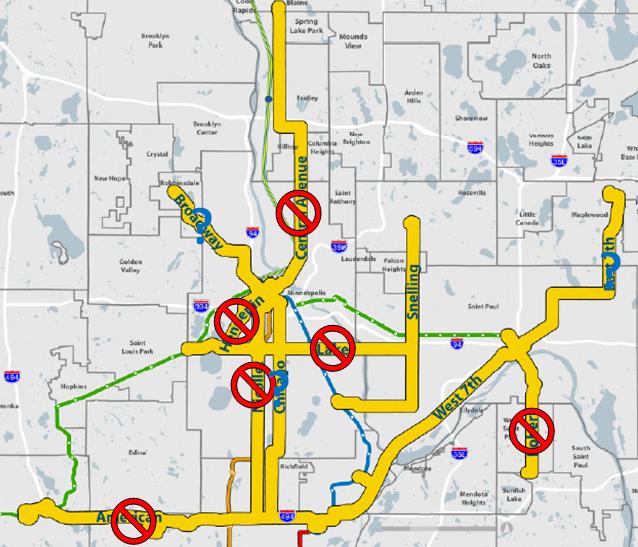 The study had two phases of screening: the first was quantitative and balanced things like ridership gains against capital costs and increased operating costs.  The second was called “readiness criteria” and understandably recommended holding off on building those corridors that are under alternatives analysis and may be rebuilt with other transit technologies in the next decade or two.  More dubiously, though, it also axed corridors that “depend on (or benefit from) connections to an unfunded transitway investment”, which was used to drop American Blvd but also Hennepin, the corridor that stood to gain the most riders from rapid bus improvements.  While Hennepin also had a somewhat higher per-mile cost, it is hard to argue that this heavily-used transit corridor needs Southwest LRT to stand on its own two feet.  Similarly, the Chicago corridor was held to allow for study of Rapid Bus in the Emerson/Fremont corridor.  Certainly it’s understandable to study that Hi Frequency corridor for these improvements also, especially since it contributes to more than half of Route 5’s current ridership, but why does that preclude investment in the Chicago corridor?  Wouldn’t this be a good time to implement an East-West Downtown Free Ride bus using the two halves of Route 5?

Perhaps I’ve made it sound more dire than it is.  With the exception of American Blvd, none of the corridors were found to be unpromising for Rapid Bus.  Basically they’re just recommending most of the corridors be held pending further study.  That’s cold comfort in a region that averages 30 years of study on transitways before dirt starts to move.  See the list of meeting dates and times at the bottom to find one that works for you to show up and tell them you’re tired of waiting for quality transit.

The second study for which we’ll soon be meeting is related to the Central LRT currently undergoing installation.  Metro Transit is taking a look at all the bus routes around the line to see if they can be tweaked to “maximize effectiveness and efficiency.” 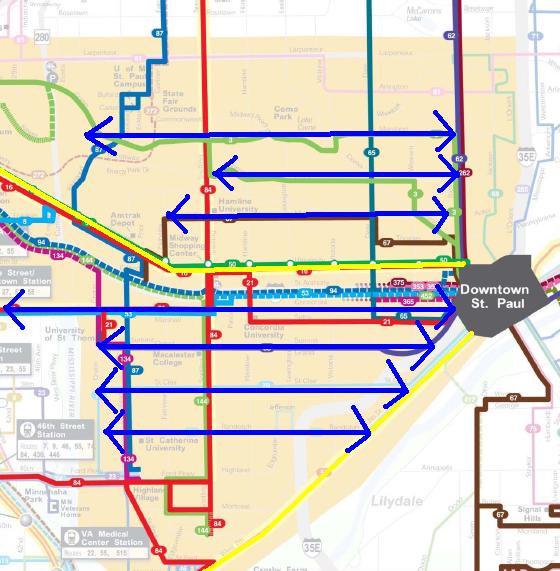 The affected chunk of St Paul – and especially its lower half – is in some respects low-hanging fruit for new ridership.  Residential densities in the area are comparable to areas of south Minneapolis that see much higher transit use.  The bus routes in this area are still archaically oriented towards Downtown St Paul, which has become a less important destination for St Paulies as its share of regional jobs has declined.  Central LRT and, to a lesser extent, the rapid bus planned for West 7th, will become a much better way for residents to access a wider variety of regional destinations.  For that to happen, though, it has to be easier to access Central and West 7th, which will need to involve a shift from the east-west emphasis of the existing network to a north-south emphasis (which in part is recommended by the Central EIS in its plan for a route on Lexington). 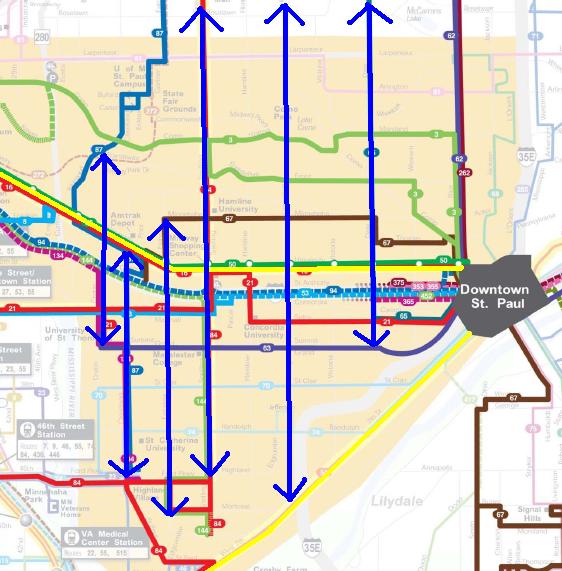 In case you can’t tell, I’m editorializing here; the Central restructuring study doesn’t seem to include  routes 70 and 74, which help provide that overemphasis to Downtown St Paul.  The scheduled meetings promise to include information about “potential changes”, but it’s unknown how many details there will be.  For now, the study page only includes an analysis of existing conditions (reams and reams of it!).  I guess we’ll just have to go to the meetings to see what the plans might be…