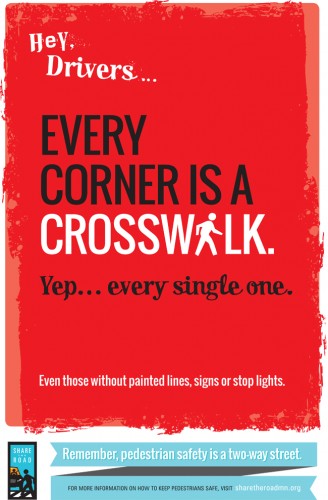 Saying it don’t make it so.

The list of recent pedestrian fatalities is long: take the accident in Ramsey where an elderly couple was killed by a car, or the death of Cleo Thiberge St Paul. Partly in response to the wave of recent accidents, MN-Dot has launched a new pedestrian safety campaign. You’ve probably seen some of the cute billboards and / or posters around town. They’re cute.

But for me, these kinds of campaigns only illustrate the limits of educational billboard advertising approaches to changing our transportation system. Educational campaigns can be more about public relations than about changing behavior. And I’m not sure that our policy makers really understand that.  For example, read this excerpt from the Star Tribune article about the pedestrian safety campaign. It features a quote from a state traffic engineer, about the problem of pedestrian safety:

“In fact, experts say it’s going to take all three — enforcement, engineering and education — to truly turn the trend.

“I’m not sure everybody understands every corner is a crosswalk,” Groth said. “There are a lot of things we can be doing — it’s not just one thing.”

Groth repeats a argument that I’ve heard so often in discussions about road design. It’s become a mantra: the equivocation and equivalence of “enforcement, engineering, and education.” How people drive and move around, the story implies, is a equal mix of these three policy approaches.

The problem with a statement like this is that these different kinds of policy approaches are not equal. When it comes to keeping people safe, education and enforcement have stark limits. Outside of a few rare moments, enforcement of laws such as the 3′ bicycle law, or the ‘stop for pedestrians in crosswalks’ law are asymptotically close to zero. I remember a St Paul police campaign from years ago where they set up a laughably futile crosswalk campaign, trying to change driver behavior. Police officers would step out into the crosswalk and try to get cars to stop for them (as required by law). If any of those officers made it across the street, I’d be surprised. Enforcement is meaningless if every other part of the system is designed to encourage behavior.

A largely futile crosswalk campaign on Snelling Avenue from 2009.

Education campaigns, too, have obvious limits. More than anything, these campaigns provide engineers and policy makers with a “false sense of security,” offering the illusion that they institutionas have  accomplished something when (in fact) very little has changed. Placing up a few signs that say “Every corner is a crosswak” is likely to have almost minicuscle effect. How many people are likely to look at the billboards? OF those people, how many will understand what they are trying to say? Of those people, who many will actually care? Of those people, who many will actually change their behavior? What percentage of the time? 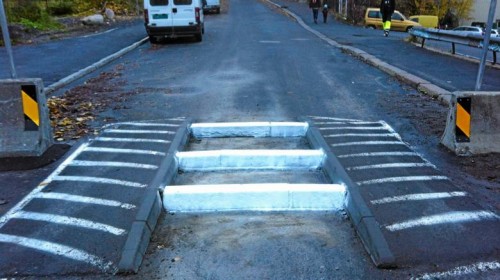 No, the only real solution to pedestrian safety is “engineering.” The best way to changing behavior isn’t through more signs, but through changing the street design. Real change is concrete change. For example, compare an educational campaign that says “every corner is a crosswalk (even ones without crosswalks)” to actually designing and paint decent crosswalks throughout the city. Compare hiring thousands of policemen to enforcing safe speed limits all through the city, to constructing “sleeping policemen” (what the British call speed bumps) that actually limit how fast people can drive, 24/7. Compare the erection of flashing speed limit signs to traffic calming. Compare a yellow ‘human being’ sign to a road diet, or narrower lanes, or bumpouts,

There’s no comparison. Actual concrete viscerally slows down traffic, no matter what the time of day. All of these things, real concrete changes, are effective no matter who is behind the wheel, or what they are thinking about, or what kind of person they are. All of these kinds of changes demand more from drivers, and say “pay attention” not with a sign, but with an demanding road environment.

I’m not saying that educational campaigns can never be useful. I was living in Massachussets when they launched a new law that required drivers to stop for pedestrians in croswalks. It took a while, but eventualyl state engineers placed enough of those yellow bollards in the middle of the street, and painted enough crosswalks, that cars started stopping for people on street corners. Now, if you walk around Boston or Northhampton you have to be careful not to stand too close to the edge of the curb or you’ll stop traffic. (You’ll probably end up crossing the street out of guilt, even if you don’t want to.)

But these kinds of campaings are a small part of the picture compared to the actual concrete changes that are required. The proper ration of “enforcement, education, and engineering” should be something like 15%, 10%, 75%. The vast majority of our attention and resources shoudl be spent on designing streets and public spaces that don’t require much education and enforcement, places that ‘educate’ us through how they look and feel, and what kinds of movements they facilitate. Simply saying “every corner is a crosswalk” doesn’t make it true. Most corners aren’t crosswalks, even if the law says so, because at most corners cars won’t stop for you, and you’d have to be suicidal to attempt to cross the busy 4-lane road there. It’s time to focus less on educational campaigns and more on actual designs that don’t require a “education” in order to make sense.

12 thoughts on “The Limits to Educational Campaigns”