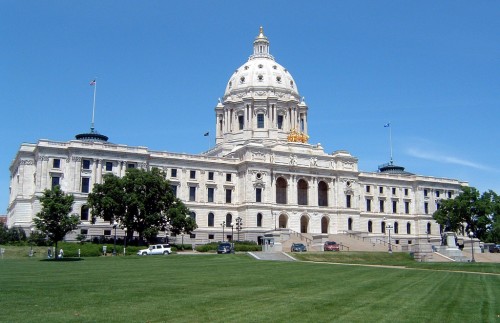 Just two years after the Minnesota State Senate and House of Representatives came under Republican control in the Tea Party wave of 2010, both houses flipped back to Democratic-Farmer-Labor majorities in the election this past Tuesday. This was a big surprise to local news outlets, who had expected Republicans to retain the upper hand. The state has had a string of Republican and third-party governors in recent decades, so this marks the first time since 1990—the Rudy Perpich administration—that the governor and the leadership in both chambers have been in DFL hands.

I won’t try to decode what was going through voters’ minds on Election Day, but this had certainly been the least popular legislature in memory: The public blamed them for the 2011 state government shutdown by a 2–1 margin over Governor Mark Dayton, and approval of the legislature dipped to 17% in February this year. Perhaps buoyed by the turnout against two constitutional amendments that grabbed serious attention, the electorate created a Democratic wave just as big as the one that brought many Tea Party-infused candidates into position just one cycle ago.

The change in Saint Paul, as well as shifts in power nationally, should lead to better outcomes for advocates of balanced transportation including infrastructure for walking, biking, transit and trains to complement our current system heavily biased toward auto and air travel.  This past legislature had reduced funding for or declined to fund projects including the Southwest LRT line from Minneapolis to Eden Prairie (now known as the “Green Line Extension”) and the Northern Lights Express intercity train from Minneapolis to Duluth.  They had also reduced the biennial allocation of funding to Twin Cities-area public transit by 46%, slashing annual state support from $72 million to $39 million.

Oddly, that particular legislation included guidance for the following biennium to restore most, but not all, of that particular pot of money—perhaps someone knew their moment in the sun was fleeting.

Rep. Michael Beard (R–Shakopee) in particular caused infuriation for transit advocates in his role as chairman of the House Transportation Committee, particularly after proposing drastic cuts and making comments indicating he viewed public transit primarily as a social service for people of little means rather than a legitimate transportation alternative for the public at large. (Surprisingly, despite the anti-train record, Rep. Beard has been known to take rail excursions such as those offered by the Friends of the 261, though I don’t know if he’s taken them of his own accord or was invited along by rail advocates.)

Mr. Beard easily retained his seat in this year’s election, but will no longer hold the chairmanship of the Transportation Committee. Other seats along the Southwest LRT corridor did flip to DFL hands, however. Up north, Chip Cravaack lost his U.S. House seat from the 8th District which includes Duluth, being replaced by Rick Nolan, a former congressman. Cravaack was opposed to the Northern Lights Express train service, but Nolan appears to support it (though his campaign website specifically calls out “high-speed light-rail”… Oh dear).

Another major rail project that stalled in 2010 was the high-speed extension of Amtrak’s Chicago–Milwaukee Hiawatha Service to Madison, Wisconsin, which probably would have been extended to the Twin Cities a few years later.  Curiously, while Minnesota’s government went all blue in the general election, Wisconsin’s capitol returned to red as the slim 1-vote Democratic majority in their State Senate (due to recall elections in 2011 and 2012) was washed away.  With a governor whose campaign drew upon and fueled ire against the Madison extension, it seems unlikely that there will be significant movement on this front beyond the current effort to run a second daily train on the route of Amtrak’s Empire Builder.

Similarly, the political winds didn’t shift quite as much in Washington as they did here, so funding from the federal government may continue to slow down. Democratic candidates for the U.S. Senate largely ran the table, but the power shift was much less pronounced in the U.S. House, where the GOP remains in charge.

Will either the U.S. House or the Wisconsin Legislature become more moderate this time around? I can’t say. Hurricane Sandy has been used to focus attention on climate change, and we need to restructure our land use, transportation networks, and utility networks to deal with that. Rising oceans wouldn’t seem to affect Wisconsin much, but the storm was big enough to whip up big waves on Lake Michigan. We’ve had some big storms in the Midwest as well, such as the one that caused massive flooding in Duluth this past June. Perhaps outside events like these will help shift some opinions on a variety of transportation projects.