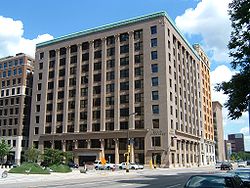 The owners of the Minneapolis Grain Exchange building pay nearly 42 times more per square-foot of land in property taxes than the adjacent surface parking lot.

Earlier this year, the city of Minneapolis received a grant from Met Council to study possible strategies for doing away with its over-abundance of downtown surface parking. For lots of reasons, the fact that surface parking covers one-third of the entire surface area of downtown is bad news for the city.

One solution to this problem that the city should seriously consider: taxing land at a higher rate than buildings.

The conventional property tax, which taxes land and buildings at the same rate, is essentially backwards when it comes to the behaviors it incentivizes. It penalizes property owners for building or making improvements to their structures, while rewarding speculators and absentee landlords who would rather allow their properties to decay than make expensive (and annually taxable) improvements. Taxing land and buildings at the same rate means that as long as you don’t put any buildings on your land, your tax bill is going to remain relatively cheap. If you’re a speculator, this means that you only need a modest amount of revenue (say, a few bucks a day from people driving into the city for work or to go shopping) in order to sit on that land indefinitely, or until someone comes along offering your “pie-in-the-sky” price (to quote one downtown city planner I spoke to)—effectively keeping the land out of the hands of those with genuine interest in putting it to productive use.

By taxing land at or near its development potential, however, owners of land being used at less than maximum productivity would be paying a disproportionate amount in taxes in order to keep it that way.

Aside from the obvious goal of raising money to pay for public services, we levy taxes either to discourage a particular behavior in favor of another (taxes on cigarettes and alcohol discourage consumption and thus promote healthier lifestyles/lower health care costs), or because a given resource is scarce while demand for it is high (i.e., the gasoline tax). But if the city is trying to encourage development—and to attract the 70,000 more downtown residents it seeks by 2025—it hardly makes sense to place a tax on that behavior. Similarly, if the city wants potential developers to treat land as the scarce resource that it is—encouraging them to build up rather than out in order to maximize economic output and reduce sprawl—it makes sense to tax land at a higher rate than buildings.

The intersection of 5th Avenue South and 3rd Street South in downtown Minneapolis provides an instructive example of how our property tax code is currently sabotaging the city’s development goals. At this intersection, we see three distinct forms of development: a surface parking lot (owned by the Star Tribune Co.), a multi-level parking garage (Gateway Ramp), and a commercial space (the Minneapolis Grain Exchange building).

This is completely backwards. From the city’s perspective, the Grain Exchange building is the best and most preferable use of land of the three, while the surface lot is the least. And yet, looking at the tax figures one would think exactly the opposite. By simply taxing land at a higher rate than improvements, owners would be motivated to maximize the productivity of land. Parking lots would still exist of course, but they would be condensed into above- or underground garages rather than in mile-long parking corridors. In this way, by removing the penalty for production and development, two-rate taxation is actually a form of economic stimulus.

But two-rate taxation is about more than encouraging dense urban development and reducing sprawl. As Rick and Will Rybeck note in a recent essay, two-rate taxation also addresses the root cause of the boom-and-bust cycle of the real estate market:

But Pittsburgh adopted a two-rate property tax in 1914. As evidence that this reform reduces speculation, Pittsburgh’s decline in total land values was only 11 percent between 1930 and 1940.

After increasing the tax differential between land and building taxes in the late 1970s (land was taxed at a rate 5.77 times higher than buildings), Pittsburgh also saw significantly increased development activity at a time when most cities its size were experiencing declines.

There are obstacles, of course, to implementation. Current law requires the value of properties in Minneapolis to be assessed every five years. Two-rate taxation would require more frequent land valuation, and the process of assessing the value of a piece of raw land absent its improvements is difficult. Furthermore, as is the case with any tax, there would be winners and losers. Owners with a high improvements-to-land ratio would generally benefit or remain neutral, as would most residential properties (especially owners of multi-family units), while those with a low ratio (think car dealerships and parking lot owners) would see a tax increase. The redistributive nature of the tax could prove politically difficult.

Nevertheless, the benefits almost certainly outweigh the potential costs. As the city ponders ways to encourage denser downtown development and bring more people (and jobs for those people) to the city, implementing a two-rate tax should be under serious consideration.

26 thoughts on “Tax Land, Not Buildings”