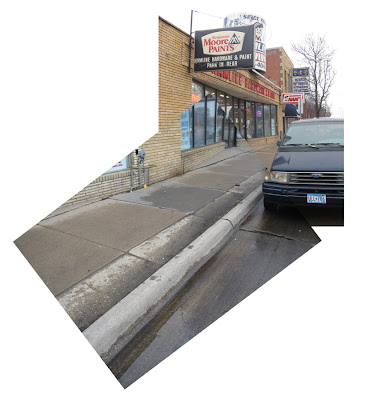 I have been re-reading Clay McShane‘s Down the Asphalt Path, an absolutely fascinating history of early 20th century urban engineering and street design debates. The history of asphalt may not sound interesting to you, but the book is absolutely filled with facts that amaze and astound, particularly if you pay any attention to contemporary transportation issues. For example, in the final chapter, McShane describes how once automobiles had started to become more commonplace in US cities, engineers in urban public works departments began re-designing cities to accomodate them:

The municipal engineering manuals recommended increasing the standard street width, so repaving projects frequently included some widening, usually by cutting back on sidewalks, a relatively inexpensive expedient. New York widened 23rd Street, an important crosstown street, in 1910. Two years later, the city cut back Fifth Avenue’s sidewalks to add two new ten-foot lanes for traffic. Later the city widened Madison Avenue, a project favored by merchants on that street, but opposed by residents. Baltimore widened its streets a little after the great fire of 1904 and San Francisco did the same after the earthquake, but only on a piecemeal basis. Public works departments in other cities also cut back on sidewalks. High condemnation costs limited most building demolition to the occasional elimination of bottlenecks. Municipal engineers also increased the radius of downtown curbs to allow cars to turn more easily. This made it slightly more difficult for pedestrians to cross the street. Widening streets often meant cutting down street trees. Abutters objected, but the demands of suburban commuters and shoppers for parking spots almost always took priority. Thus, urban residents not only lost the use of the street itself for social, recreational, and commercial purposes, but much of their sidewalk and many trees as well. Even the limited success of these street widening programs suggests the political power of automobility, since abutters had only allowed widening under the rarest of circumstances in the nineteenth century.

As early as 1907, a far-sighted writer in Municipal Journal and Engineer had noted that street improvements had not eased traffic mobility, but “the result has appeared to be exactly the opposite.”

This kind of history shows you how very old current debates over street design really are, that the exact same conversations about parking, traffic, and pedestrian comfort have been going on in US cities for over a century. And it’s only recently, in the past five or ten years, that McShane’s “urban residents” (on foot, on transit, or on bicycle) have begun to win a few skirmishes over the allocation of our streets and public spaces. After one hundred years of widening streets for cars, only in the last decade have cities begun thinking about different priorities. That’s not a very good track record.

Your classic road diet before and after picture.

What Can Our Cities Do Now, Right Away?

I was thinking about this recently because of a conversation I had with a local politician a while ago, who had asked me, “What can I do in my city to help improve cities for biking and walking? Give me ideas of projects that I can push for.” (Yes, this actually happened. It wasn’t just a dream.)

It took a while to figure out an answer. So many of the interesting ideas for re-designing cities seem to be politically unattainable. (David’s post yesterday about covering urban freeways is a good example. While those projects might be great ideas, they’re all extremely expensive, and would require Gordian political and logistic feats.) Most urban design projects, from new transit investments to a new bridge, require the approval of multiple levels of government, and multiple sources of funding. Even streets redesigns become complicated very quickly because a great many streets are the jurisdiction of either the state or the county, and thus subject to federal design guidelines. (This gets wildly complex really quickly, believe me.)

So the question remains: What is the easiest, most important thing that cities can do right away, on their own, to improve quality of life?

The Answer: 4-to-3 Lane Conversions on Arterial Streets

For any 4-lane street under about 20,000 cars per day, cities should re-stripe the street to have one traffic lane in each direction, a center turn lane, and improved pedestrian and bicycling space. The costs of doing this are minimal, but the benefits for cities and the people who live in them are immense.

The main benefit of a 4-to-3 conversion has to do with safety and quality of life. While safety improves for everyone, including drivers, it dramatically improves for  the most vulnerable road users, people who live and walk along these main arterials. At first, a simple change in the lane configuration may not seem like much, but to understand why they make such a big difference, think about the different road users and how they behave in each of these situations.

First, from a driver’s perspective: how you behave on a 4-lane configuration is really different from a 3-lane configuration. With two lanes in each direction, drivers are always thinking about passing each other. Driving down the road, you’re constantly scanning the cars ahead of you to see if they are slowpokes, or if they’re making a (dreaded) left turn. Cars are continually switching back and forth between the two lanes, glancing over their shoulders to see if the person in the next lane will let them in, speeding around turning and slowing cars and trucks. (For a good example, drive down Hennepin Avenue pretty much anytime.) This kind of situation means that car drivers aren’t paying much attention to the sidewalks, crosswalks, or looking out for bicyclists. This configuration facilitates speeding, and creates lots of dangerous automobile movements especially at intersections.

Contrast that wtih a 3-lane configuration. Here, each car has to follow the one in front of them. Left turning vehicles move to the center, and drivers are never stuck behind them. Nobody is passing anybody, and traffic moves along with the stoplights. Not only is the whole situation is more relaxing, but its far safer for everyone involved. Speeds are lower, and most importantly, you don’t have lane changes occuring at intersections or driveways.

From a pedestrian or cyclist perspective, the difference is even more palpable. Anyone trying to cross a 4-lane street has to deal with multiple lanes of traffic moving at different speeds in different directions. That’s a recipe for disaster.

Conversions almost always come with more space allocated to the sidewalk and pedestrian realm. For anyone walking or biking along a 4-lane street, its a highly unpleasant experience. If our cities want to encourage walking and active transportation, road diets are an absolute minimum step to take.

Riverside Avenue before and after its 4-to-3 conversion

To really experience the difference between these two treatments, look at some examples from the Twin Cities. As I’ve written before, Franklin Avenue in Minneapolis is an excellent place to compare the experience of both 4- and 3-lane configurations. A few years ago, Minneapolis converted Riverside Avenue to a 3-lane configuration, and it changed a dangerous street into a comfortable one. (The design has changed again since then, and been cast in stone.) Nicollet Avenue is another case, and probably the best north-south arterial in the city for bicycling and walking. In St Paul, there are a few more examples: much of West 7th Street is a 3-lane road, and Lexington Parkway south of Grand Avenue has been converted in ways that improve the quality of life for anyone living nearby. (For anyone curious about the difference design can make, go for a walk on one of these streets.)

A cyclist on the 4-lane portion of Franklin Avenue

At the same time, there are lots of examples of streets that could sorely use this treatment, city controlled streets that remain in their dangerous 4-lane configurations. In Minneapolis, you can tell where these streets are by simply glancing at the bicycle-car collision map released yesterday. NE Broadway, Lyndale, and Franklin Avenues are obvious candidates, streets that are familiar problems for anyone walking or biking in those neighborhoods.

In St Paul, there was a recent push by neighbors during public meetings about converting Hamline Avenue from a 4-lane to a 3-lane configuration. Given the need for North-South connections in the city, the university in the area, and the coming Hamline Avenue light rail stop, it would be an ideal candidate. Parts of Maryland, Cretin, and Dale Avenues are other obvious candidates. (Also, pretty much any street on the East Side.)

So often during debates over transportation projects, politicians and engineers will say “It can’t be done.” Pick any project, and either there’s no money, or arcane federal regulations won’t allow it.

Well, 4-to-3 conversions on our unsafe arterial urban roads are the exception to that rule. These kinds of conversions are doable immediately. They’re both cheap and practical. Compared to basically any infrastructure project, the far and away easiest way to re-make our cities is through a different application of paint and signage.

The difference between a 4-lane and a 3-lane configuration of a road is huge. A street that is currently dangerous for drivers, pedestrians, and cyclists becomes vastly safer overnight. A street that encourages speeding becomes one that encourages people to obey the law. 4-to-3 conversions make a significant difference for anyone nearby, particularly the most vulnerable users of the road. For a hundred years, cities have been taking space away from the sidewalks, until walking and biking in the city has become dangerous and unpleasant. Its time we started reversing the trend.

39 thoughts on “4-to-3 Road Diets: The #1 Thing Cities Can Do Right Away to Improve Quality of Life”