[Note: It just occurred to me that this post is the opposite of Betsey’s! It could be subtitled: “small steps add up to squat.”]

Last month, I happened across Conrad deFiebre’s review at MN2020 of Car2Go, the latest innovation in car sharing to hit the streets of Minneapolis. Something caught my eye. Here’s the piece:

Minneapolis, already home to several first-generation car-sharing services, is launching a possible game-changer in the field: Car2Go is deploying hundreds of two-seat Smart cars that can be picked up and dropped off at any unrestricted parking spot in the city — even in front of your own home.

This stationless innovation relies on global positioning technology plus communication links ranging from state-of-the-art (a smartphone app) to old-school (land-line telephones). For hourly or by-the-minute use rates, you get free fuel, insurance and parking. In Minneapolis, it also means at least a tenfold increase in the number of shared cars on tap.

With one-way trip functionality, Car2Go certainly seems cool. (See also Brendon’s recent review). But as I thought about it, I started to become more interested in deFiebre’s concept of “gamechangers.” Is car sharing a gamechanger? Would people not owning their own private automobile really transform our city? What does it mean to be a “gamechanger”? 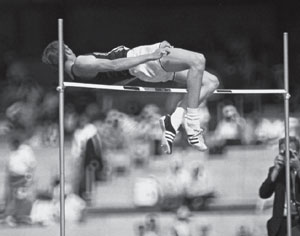 The concept of “gamechanger” marks out a difference between incremental change and radical change. In other words, most of the changes we make to our cities have small effects. We stripe a bike lane or tweak a zoning code, and cars slow down slightly, a few more people ride their bikes, or we get a few new square feet of building on our block. Most changes we make are like this, nothing radical, no big waves in the pond.

Following the sports analogy, most changes we make are like people of different skill level playing a game. You sign Clayton Kershaw to pitch for your team, and you get a few more strikeouts, a few less runs, and win a few more games. Some people are better at playing the game, and slowly the game evolves.

Game changers, on the other hand, cause radical change. Sometimes it’s the rules of the game changing completely (e.g. the designated hitter), and sometimes it’s someone who comes along and introduces a whole new way to tackle the problem (e.g. the Fosbury flop). A game changer marks something that causes radical change, that forces all the other people playing the game to re-think what they’re doing. Faced with a game changer, we all have to question our assumptions and look again at how we approach the task at hand.

So, you’d have to think that gamechangers are pretty rare. But if you want to really make a difference in our cities, we should be spending more of our time trying to change the game, not just learning to play it a bit better. In the analogy, “the game” is our unsustainable urban development pattern, the way our lifestyles are destroying the planet. We can spend years trying to bend the rules, making slow or little progress (kind of like the Twins trying to become a good team again). Or we can change the game completely. (E.g., like next year when the Twins innovate a new system of “golf scoring,” and become the best team in the league.)

So, what would be the “gamechanger” for different urban design challenges we face? What are the differences that will make a difference? 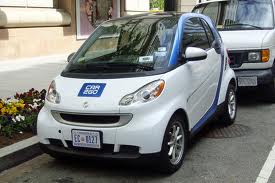 Well, to me this is a bit debatable. But I think that car sharing, and particularly a flexible service like this one, might really be a gamechanger for how we get around. One of the big reasons cars are so pernicious is that much of the cost is up-front. We pay for the car, the insurance, the maintenance, the license and the registration whether we use the car or not. These are “sunk costs,” and they stack the odds for the actual decision making process. (Q: Should I drive or take the bus. A: I already paid for my car.) Car sharing changes all that because you’re paying the cost of the car a la carte, instead of all up front.

Another reason it might change the game is that car sharing removes our personal attachment to the car. If we share our car, we no longer see it is an extension of our ego, as “who we are” as individuals. Instead, we become part of a community.

(There’s also the “cars are parked 90% of the time” argument,” which might also change the rules of the parking game.)

We’ll have to wait and see, but a flexible, affordable, and reliable car sharing service has a lot of potential to change how we think about our infrastructures.

Other possibilities? Robot cars (too far away) 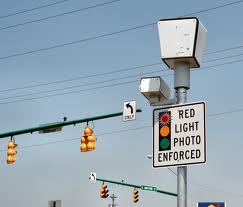 I’ve written about this before, but recently I’ve been having a lot of conversations about traffic safety. How can we get people to stop for pedestrians, to drive more slowly and carefully, to pay attention? Do we hire more cops? Do we fund a large education campaign? Do we re-design our streets?

Yes, all of those will have small effects. But for the cost of a single police officer, you can install a whole bunch of automated and highly effective red light cameras that will operate 24 hours a day, 7 days a week and do so without any racial profiling.

In fact, once they’re made legal in Minnesota, the main gripe with red light cameras is that they are too effective. People are upset because they actually work, they actually enforce the law. How unfair!

We can spend heaps of time and money on a new safety campaign, or we can call our own bluff and make red light cameras / speed cameras / crosswalk cameras part of everyday life. Trust me, that will change the game really quickly. 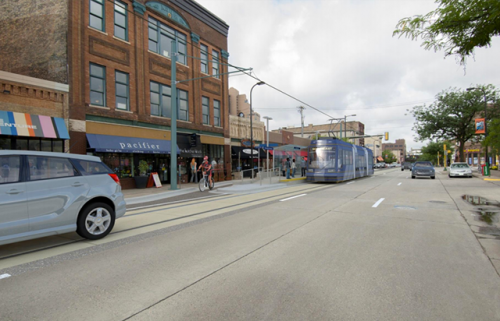 There are few possibilities here, but none of them seem perfect. An effective and efficient bus system (particularly with dedicated right-of-way) would be amazing. Done right, this is called BRT, and I was tempted to put it here. But Metro Transit’s aBRT plan isn’t really a “gamechanger” in the sense that these other things might be. It’s an incremental change that shaves something like 10% of the travel time off the bus trip (IIRC). Frequency increases, the buses get a bit more comfy and a bit faster, and stops are a bit nicer… those are all good changes, but they’re not gamechangers.

The same might be said for streetcars. I believe that streetcars will be gamechangers for the street environment in the places they’re built, radically altering the feel of the street, calming traffic, placing pedestrians the center, and fostering walkable density along a few key corridors. But they won’t change the game for transit. (It’s because they’re slow.)

(Also, LRT is not a game changer.)

Here’s another difficult one. I’m tempted to say something like, “Ending the Mortgage Interest Deduction.” That would reduce a huge way that home purchases are subsidized all across the board.

Another one might be shifting the Federal road funding model away from the 90/10 cost-share. That would certainly force cities and states to re-think how they’re building roads and subsidizing development. There’s no way that the current development pattern would continue (at its current rates) if cities had to pay for freeways themselves. 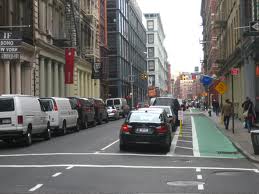 Look at the impact that the Midtown Greenway has had on Minneapolis, and imagine if we had a system like that running through the entire city. That would change the game for bicycling, and get a whole new group of people onto bicycles. The key is that you’d be able to bike long distances without ever having to “share the road” with aggressive and scary cars. The qualitative difference between bicycling and driving to work would be stark. (You can either sit there strapped in your seat getting angry at someone cutting you off, or be out in the lovely weather, cruising unimpeded along a lovely path. Your choice.)

This is why advocates in Minneapolis are so focused on building cycletracks, despite the structural difficulties they present to public works’ departments. As Walker recently pointed out, building a better network of bike lanes might get a few more people to try bicycling, lift our mode share by a few percentage points. But if you want to double or triple the number of people bicycling, it’s going to take comfortable and convenient cycletracks.

(Crappy and dangerous cycletracks are NOT gamechangers, FYI.)

Other possibilities? See this law from Bolivia making cycling mandatory. 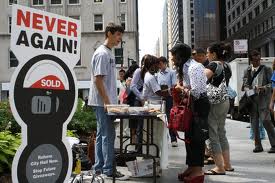 Of all the land use levers we have, I’m convinced that parking policy is one of the most effective. It might seem politically daunting (“You can rip that parking spot from my cold, dead hands!”), but compared to tackling housing, small-business retail, or downtown interests, parking might be the easiest kind of land use to tweak. Reducing parking is interesting is that it does double duty: you’re reducing the supply (giving opportunity for density), and reducing the demand (by creating density). At best, this will set in motion a virtuous cycle…

There are a few steps to go about charging market prices for parking. Most simply, you get rid of mandatory minimums. If people want to pay for their parking spots, they can! (But they don’t have to.) You let the market sort out how and where and how much parking will cost.

It’s also important to set market prices for publicly-owned parking. (See the Chicago privatization scheme or the San Francisco “smart parking” policy.) A coherent and consistent market for parking, so that people actually pay the full cost for car storage, would go a long way to making our urban land uses more sustainable.

Most everything else seems either a utopian fantasy or a minor tweak.

Outside of the car-sharing evolution, none of these things seem particularly easy to accomplish. But urbanists and sustainable city advocates would be well served by focusing more on these “game changer” ideas instead of spending all our time tinkering around the edges. As they say in hip-hop, “don’t hate the playa, hate the game.”