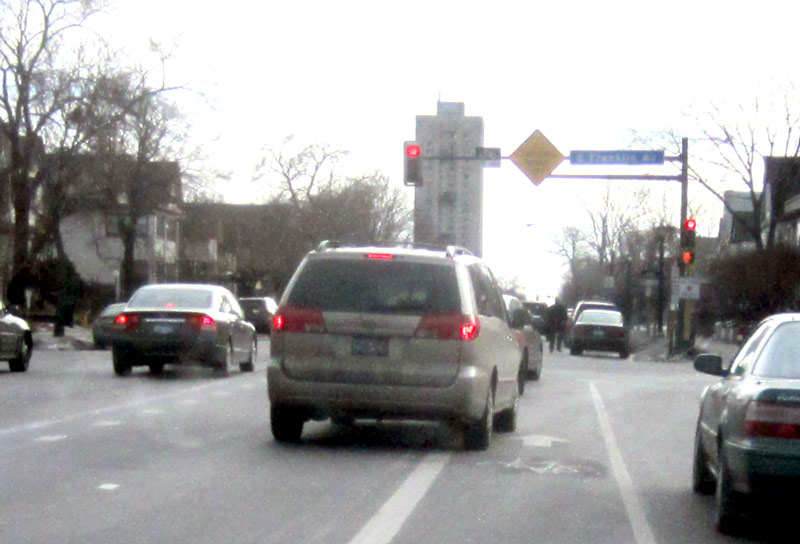 Tony Hunt recently put up a great post (Park, Portland, and Alliteration) which garnered a question of why more people aren’t riding on these wonderful new bike lanes. This is not an uncommon question when new bicycle facilities go in, with most people also thinking “after all that money was spent and lanes taken away from cars”.

Well, it’s a bike lane. It’s a great bike lane, probably the best bike lane in the Twin Cities, but it’s still a bike lane. It still has cars whizzing very close by at 45 mph—separated only by a bit of paint, that disappears under snow in winter and is pretty well gone after five years anyway. It still has cars and trucks driving in to the bike lane to make a right turn, park, drop people off, deliver stuff, pull out of a parking spot (without looking?), get around another vehicle, or just because it looks like a great place to drive (and looks better and better with each beer or cell call the driver has had). It collects tire flattening and fall producing debris that only get swept away occasionally. It gets clogged with snow in winter and anyone daring to use it in winter is likely to get splattered with salty slush by those cars going 45 mph next to it. And then there’s the salt dust in your eyes and mouth after things dry out a bit. And after all of that, you still have to share a right turn lane (even though you’re going straight) with cars and the, not unfounded, fear that they will turn in to you and crush you.

What mom wouldn’t want to take her kids for a thrill bicycle ride on Park or Portland?

Don’t get me wrong, these bike lanes are a great improvement for some of us. I’ll take these over what was there before any day. But, they’re not even minimally good enough for the vast majority. So, instead of the 2% of us who were willing to ride on Park before, now maybe 4% of people are willing to do so. That’s good. But what about the other 96%?

Along with the 7 bicyclists they killed in Minnesota last year, drivers of cars also killed 276 people in cars (and over 100 pedestrians and others). Who really thinks it’s a good idea to share the road with these folks?  Even with those painted lines to protect you?

Here are the keys that, in my opinion, need to happen to get people bicycling: 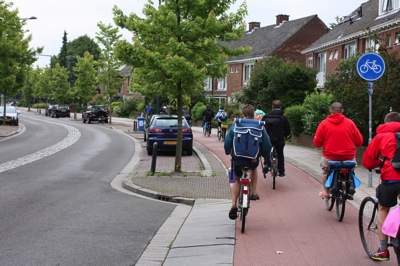 Safe, Comfortable, Segregated Cycleways – Rational people don’t like to mix with motor traffic. They know, and feel in their gut, that we can’t even keep people in steel caged cars safe on our roads, what chance do they stand on a bike. Most people will not begin riding much until they have physically segregated cycleways that they feel safe riding on, are safe riding on, and can count on being available year-round. Bike lanes, boulevards, and sharrows are great, but they’re only great for a very few, and many fewer during winter.

Intersections need to be made safe and efficient and the entire network of cycleways needs to be smooth enough that people can carry a fews pints home on their rack without bottles breaking. A good measuring stick of safety and navigability is if it’s good enough for parents to allow their 8-year-old to ride a mile or two, by themselves, to school. Anything less may not be worth it. 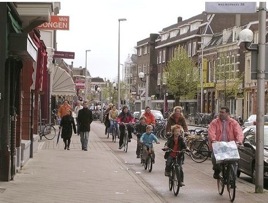 The Netherlands has a complete network that allows people to go anywhere safely. (Photo: http://dc.streetsblog.org/2010/11/18/dutch-planners-school-u-s-cities-on-bikeability/)

Complete Reliable Network – People need to be able to go somewhere. If they can’t get from here to there safely, comfortably, and reliably, they ain’t gonna do it.  Imagine if the only roads for cars were those that currently have good segregated bikeways? And that they were often closed with no viable detour? How many people would invest in a car? Or use one very often if they had it?

Perhaps most important, we need great infrastructure at destinations. People may be able to get close to places on Grand Ave, Lake Street or Central Ave, but the closer they come to their destination, the more terrified they become of being killed. Even if they quash their fear, they then can’t find good places to park and lock their bikes once there.

By the way, this is a very equal opportunity problem in the suburbs as well as urban areas. 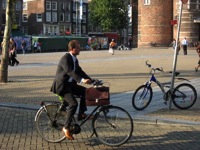 Bikes – The vast majority of bikes sold in our bike shops are not appropriate for daily transportation for most people. They’re complicated, uncomfortable, unreliable, and have exposed chains, gears, and brakes that ruin clothes and don’t do well in anything but the best weather. There’s a reason that few people in Europe ride them. People need to know that there are better alternatives in the form of city bikes and cargo bikes. Bikes that are dependable and easy to ride anytime no matter what you’re wearing.

Bike Shops – Bike shops in the U.S. are geared towards kids toys and recreation. Recreational shops make much of their money from selling accessories that most people don’t need, namely helmets, gloves, jersey’s, and shorts. Most of these shops have little or no knowledge about bicycling for daily transportation for the average person nor do they stock the appropriate bikes.

We need shops that are knowledgeable about and focused on transportation cycling instead of recreation. Shops that stock good city and cargo bikes (not just replicas) and who understand the needs of the average mom who wants to bike to the store with her children every day. Shops that make their money on the bikes and don’t need to push unnecessary clothes, shoes, gloves, and helmets. And, we need more shops. Lots more shops. People need shops with dependable bike repair close by so that if something happens they can get to a shop for repair. 200 small shops with 20 bikes each is much better than 50 big shops with 80 bikes each.

Mindshare – People need to think about riding. We’ve been getting in cars for the half-mile trip to the store two generations—bicycles are toys for kids or maybe for recreation, not for transportation. We need to plant seeds that bicycles are great for daily transportation in regular daily clothes for regular people of all ages. And, that bicycling is safe (yes, even despite what I wrote above) and does not require helmets any more than walking down the sidewalk does. Even in places that now have fairly good segregated infrastructure, this will take time, but it’s coming.

What came first, the bikeway or the bicyclist?

Bicycling in The Netherlands didn’t happen overnight. It took years of effort to accomplish what they have today. In the 1960’s they were not much different than the U.S. They were on the same car-dominant trajectory.

One major difference may be that The Netherlands didn’t have a contingent of ‘cyclists’ running stop signs and pushing for share-the-road vehicular cycling—bicycles doing battle with cars. They started off with segregated bicycle facilities that 40 years ago were safer and more inviting than what we build today and call state of the art. They started with the idea that all children should be able to safely ride their bikes to school or the store. How many rational parents would let their 8-year-old ride by themselves to school on those Park and Portland bike lanes?

We can continue with this interim step of bike lanes for the daring 2% and wait 40 years for something better, or we can skip this step and go directly to a much safer and more inviting infrastructure for everyone that will get many more people riding much sooner.

46 thoughts on “Do We Really Want Bike Lanes?”