Seattle: the real most progressive city in America

Just like with contraception, the pull-out method doesn’t work for transit. When a bus is required to exit a through lane to make a stop, then to reenter the through lane, there is inherent delay in the additional movement required. Then more delay when the bus has to yield to vehicles in the through lane since most motorists are constantly ignoring traffic laws, including the one requiring them to yield to transit vehicles. So pull-outs make transit slower, and slow transit is only a goal for Reason foundation shills and streetcar advocates, not the City and the County (nor the region).

Even worse, pull-outs are extremely dangerous. Typically, that’s because they encourage motorists (most of whom, as we’ve already discussed, are scoff-laws) to turn right around buses that are stopped for boarding or disembarking passengers. The latter group oftentimes will intend to cross the nearest street, the one that the motorist is currently turning onto without any visual notion of the conditions thereupon (unless this particular motorist has the ability to see through buses). Unsurprisingly, conflict and sometimes injury or loss of life results. This routine death trap since is found all over the Twin Cities, including on brand new streets like Nicollet Ave and Chicago Ave. 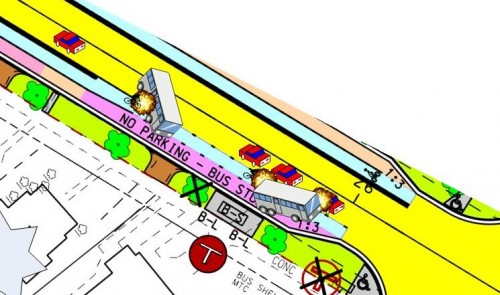 So when I saw that Hennepin County’s design for Minnehaha Ave is lousy with pull-outs I was both surprised and annoyed, then after a moment, surprised again. The design actually mitigates the above-mentioned safety problem in two ways: first, with bump-outs, which put a bit more distance between the bus and the crosswalk it is potentially obscuring, and second, more effectively, with far-side bus stops (at the request of Metro Transit, according to County Engineer Nick Petersen’s statement at the TPW meeting) . If there is not a place to turn right around a bus into, motorists are less likely to turn right around a bus. But the pull-outs here have another dangerous feature: they require buses to cross a bike lane twice with every stop they make.

This situation is likely somewhat familiar to cyclists and bus drivers in the Twin Cities; indeed, Plymouth Ave, which is served by the same bus route that runs on Minnehaha, requires buses to stop in the bike lane itself, which is less convenient for cyclists, though maybe a bit less dangerous. The local list of streets that build in conflict between transit vehicles and dedicated bike facilities just goes on and on: Lowry Ave N, Emerson Ave N, Fremont Ave N, 2nd and 7th Sts N, 11th and 12th Sts and 4th and 5th Aves downtown,  Portland Ave, Chicago Ave, the existing Minnehaha, East Franklin, University Ave SE, 4th St SE, Como Ave SE… I’m sure I’m missing a few.

It doesn’t have to be this way. In the future (AKA Holland) this problem has already been considered, and a solution arrived at. Rather than have transit vehicles weave to the right of bikes every 500-1000′, then back to the left again, they have the bikes move the right of boarding and disembarking transit passengers. This moves the conflict to the nonmotorized modes, which has considerably less deadly consequences. The transit riders then can do their transit business on a segment of concrete separated from the roadway by a curb, so the bikes can either be placed behind them on a little side canal of the roadway, or else be raised up to the sidewalk level and brought back down at the intersection (or across the intersection if it’s at a sidestreet and a raised crossing is used anyway). Hennepin County engineers shouldn’t be unaware of this approach, as it runs rampant in Montreal, and if they studied cycle tracks as they claim and they didn’t study Montreal, well then they didn’t study cycle tracks. 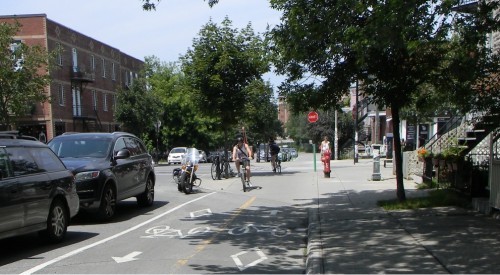 Riding the bumpout in Montreal

The cool thing about bus stop bypasses, or forward boarding areas, or bus stop islands, or whatever you want to jargon it, is that it really is optimized for parking-separated lanes. In other words, it has a ton of synergy with the goal of separating the lanes on Minnehaha for a more universally-appealing ride. This is because it’s way easier, rather than to make the bike lanes taper right to travel behind the transit boarding areas then taper back left again, to just keep the bike lanes to the right of the parking lane the whole time. That way the bikes continue straight ahead with a comfortable buffer from cars, and actually parking spaces are maximized because there’s no need to eliminate them to incorporate a taper.

Whether or not a protected bike lane is added, though, the design needs changing to at least incorporate elements that remove the conflict between bikes and buses inherent in bus pull-outs. Since its birth in Holland six decades ago, a design that positions bike lanes behind the bus stop has slowly crept around the world and has finally made it even to Winnipeg. If all of our local agencies don’t start embracing state of the art roadway design, we won’t just run the risk of losing our spot as a cycling center of the USA, we’ll run the risk of being known as a Warm Winnipeg.