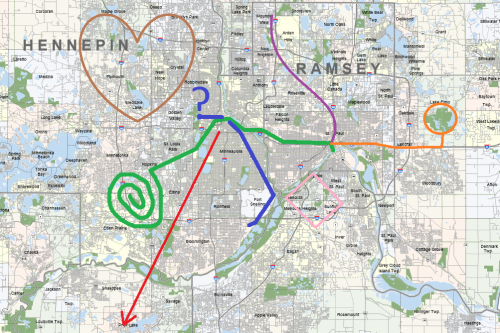 The Twin Cities: A metropolitan region that certainly values idea of transit–in the abstract. It’s full of well-intentioned people (and politicians!) who travel to Chicago ~once a year and take the Blue Line into the city from O’Hare. And college graduates who spent a semester abroad in Hamburg and fashion themselves as folks who know the value of a train. And, even, occasionally, we’ll take the bus from the parking lot at Ridgedale to the Minnesota State Fair.

We’re a smart group, right? We set up the Metropolitan Council back in the day, we regularly trounce all the red states (except Utah sometimes–what?) in all the fashionable listicle clickbait online rankings, we know someone with two (2) Jet-skis up near Brainerd, and in 2008 we even went to a political caucus. As far as we know, it’s been working well for a while. But lately, we’re getting a bit of a feeling that things may be going awry, right? That Southwest Light Rail business has been in the StarTribune over and over again, and those guys just can’t figure it out. Some rich people in Minneapolis and some loons in St. Louis Park are whining and holding up that new train. Those NIMBYs. What’s going on with that?

There are a lot of examples, in the course of human events, of lots of really smart, really well-intentioned, and extensively credentialed people getting together and cooking up schemes that are automatically hailed as great ideas by lots of people who are just a couple levels down on the totem pole from those top people. In modern society, that’s that group of people who read the newspapers regularly and on some level want a bit of credit for knowing what CTIB stands for. An extremely generous guess would put that chunk of society at, I dunno, ten percent of adults, maybe a third of the voters who show up to midterms, depending on the precinct. Most people reading this are probably in that segment of society.

The thing is that, often, in a rush to show that we grasp the findings of whatever highly-paid consultant or Organization Whose Title Commands Respect, we completely miss the point of why we asked our question in the first place. And in some cases, we allow ourselves to end up going down really ridiculous, common sense-defying paths wherein we think that, say, housing prices will increase indefinitely (are you an economist?) or that we should tear down the entire Gateway District because it’s smelly (are you an urban planner?).

If you go to the Hennepin County Central Library in Downtown Minneapolis at the corner of Nicollet Mall & 4th Street, you can go up a couple flights of stairs and find yourself among rows of file cabinets containing hundreds of rolls of microfilm with copies of historical Minneapolis Star and Minneapolis Tribune newspapers. And after spending an hour or two flying past old Dayton’s ads looking for articles about transit, it becomes clear that team transit has been talking about transit for decades. Adam Froehlig has a great collection of old transit planning maps from the 80s, 90s, and aughts on his website. It puts calls for “study” into perspective. We’ve been studying and talking and promoting, and more recently, blogging and commenting and Tweeting and networking ourselves in circles since at least the Carter administration. In the meantime, new freeways are built in exurbia with bipartisan support and it still takes half an hour to get from Downtown to Uptown on the 6.

Lots of smart people (the people mentioned in paragraph three) will consider the meager transit improvements we’ve been able to cobble together over the past decade and call it a victory; we got something, we’re doing way better than Wisconsin. Doesn’t it feel like that’s being too realistic sometimes? Generic pro-status quo argument: We need to do all this and jump through all these hoops and make all these silly routing decisions so we can get the 50% federal matching funds for this project and get it built. Here’s a new thought: We knew, basically, that we wanted to build light rail in the Southwest Corridor in the late 1980s. We could have just built the whole thing then, by ourselves, for half of what it will eventually cost when you factor in the increased cost of materials and inflation alone. To say nothing of endless studying. We didn’t do this, freight rail ended up in the Kenilworth Corridor after Hiawatha Avenue was rebuilt, and the rest is history.

Obviously, this is idealistic. That’s the point. We need to be serious about what we want. Certain outstate legislators and homebound Internet commenters will always say no, because they’re convinced that mass transit is a plot. The answer will always be no, even if they couch it in “Well, what about buses instead?” because when it comes time to fund buses, they’ll say no to that too. The conversation needs to start with a Hennepin Avenue subway. It needs to start with a Nicollet Avenue subway. We should be building a streetcar on Franklin Avenue, not on what should be the north-south transit spine of the entire city. It all feels like Obamacare: Transportation Edition. Progressives and liberals like to compromise with themselves before they even get to the negotiating table. They like to argue with each other on E-Democracy about PRT plans before getting in their cars and driving three blocks to a coffee shop.

We deserve better than watching Scott Walker and Amy Klobuchar standing next to each other with shovels at the groundbreaking for the new Stillwater bridge. Enough Minnesotans, including some suburban Republicans, support meaningful investment in mass transit even if their legislator does a poor job of voting that way. We’re at the point where this shouldn’t be such a terrible slog all day, every day, all year. This needs to be about more than arbitrarily putting lines on a map in a couple places where there’s some room left. It’s 2014.