A college is the best thing for a community have in its backyard, noted Carleton College President Steve Poskanzer soon after his arrival in Northfield in 2010. Northfield, of course, has two.

The city’s character and development pattern have certainly been shaped by Carleton College on the east side; St Olaf on the west with the historic downtown and Northfield’s oldest residential neighborhoods in the middle. Two small colleges could be a doubly good deal for a small city like Northfield looking to plan and invest wisely to build a walkable, bikeable, economically prosperous town which is also just a darn good place to live and work.

American Institute for Economic Research publishes an annual ranking of the cities offering the best “college experience” while acknowledging college towns are “also vibrant places for businesses to open, tourists to visit and people to live.” Livability takes this a step further to note “a university’s off-campus impact can also shape a town’s character and keep people there for a lifetime.” And, the walkable neighborhoods with high quality of life also make college towns great places to retire. 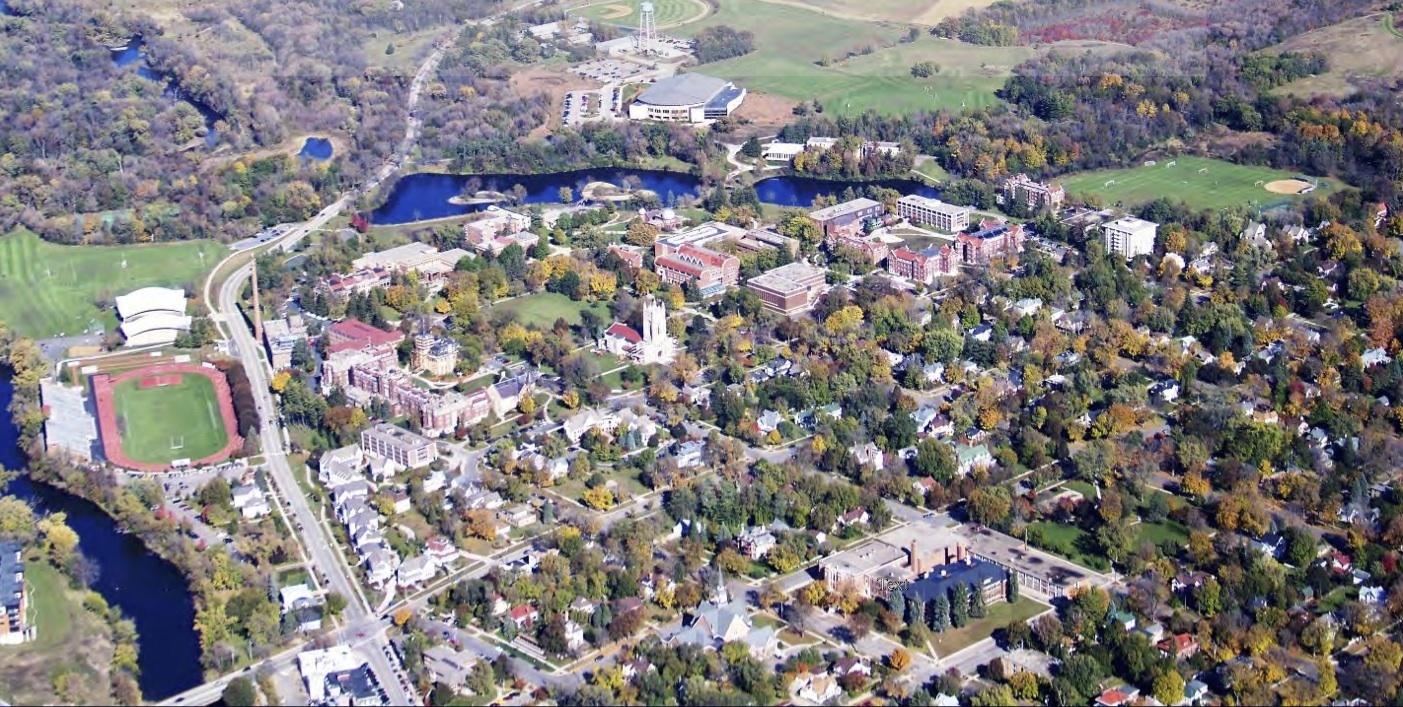 Yet, Carleton has expanded south into the neighborhood through piecemeal acquisition of residential property south of its core campus plus the footprint of the Weitz Center leapfrogging a few blocks south. Many homes have been renovated for office use which both changes the character of the neighborhood and, relative to the buildings on the core campus, creates a low density campus arm through the center of the neighborhood.  Recently,  Carleton has undertaken a strategic planning process which includes facilities planning for “The optimal long-term (50-year) overall layout of the campus to “make the best use of its available space and work to lower the operating and maintenance costs of its existing and new physical plant.” Carleton’s presentation to the community shows the College has little grasp of how the campus is interlaced with the neighborhood and how it could think more boldly to develop its campus in ways which could be more efficient for the College and make the Northfield neighborhood an even better place for the College and residents.

Does Carleton need more space?  Or does it need to develop the land it already owns more strategically? 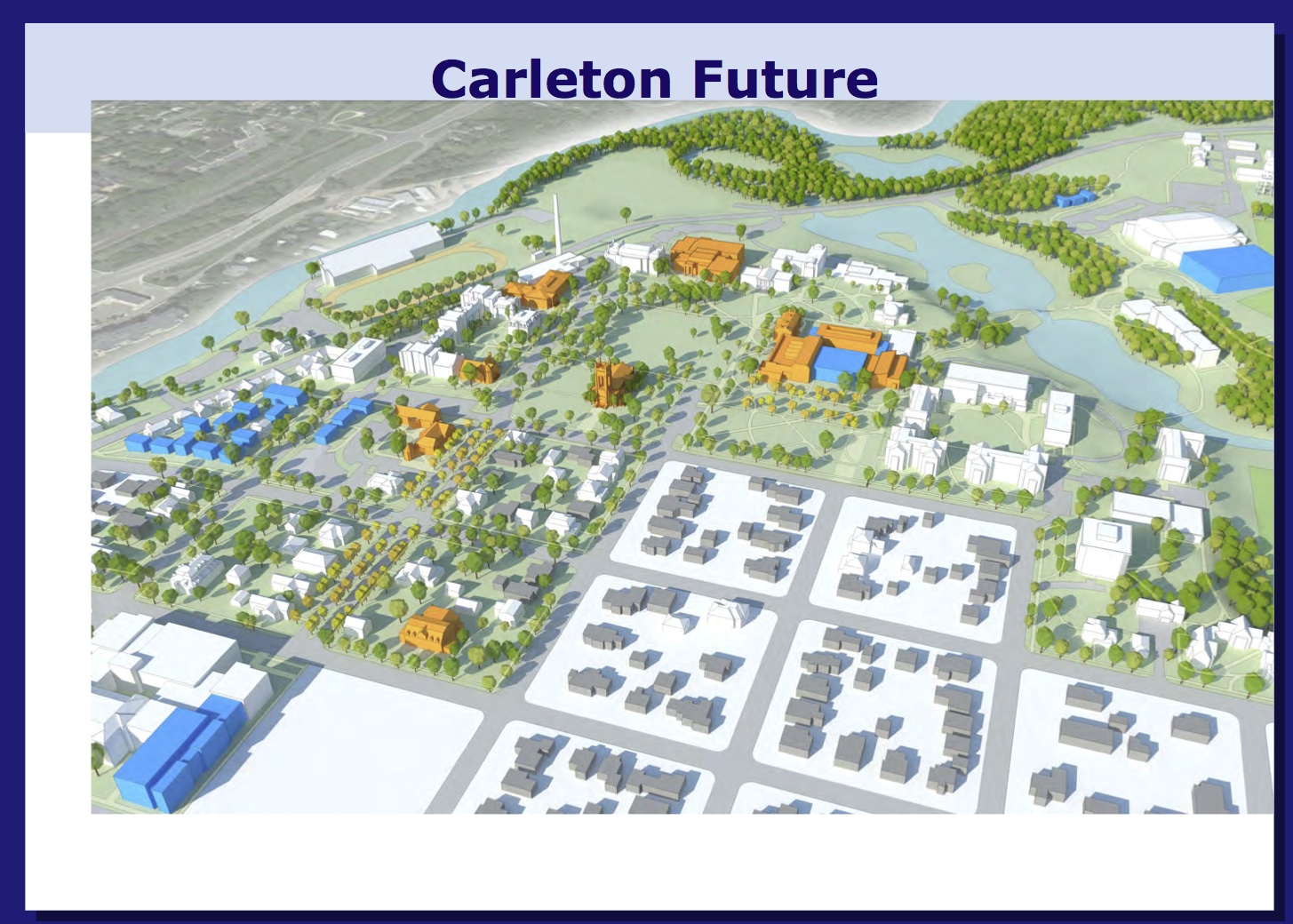 Where to grow: While Northfield limits Carleton’s expansion to the south, Carleton constrains the City of Northfield’s expansion to the north and east because of its main campus and the Arboretum.  As a result, both City and College are deeply interested in that interface. From a city perspective, continued expansion to the south in the same pattern is not desirable. Carleton infiltrates one of Northfield’s most valuable residential areas and has begun to move into the downtown commercial area. Continued loss of property in these areas erodes the character of the neighborhood as well threatening to erode the city’s tax base (the threat to downtown – Northfield’s most valuable land per acre – is especially potent). Carleton’s historic habit of acquisition and renovation of residential property undermines the city’s ability to plan and regulate as well as lacking transparency for neighbors. Plus, Carleton has some prime access to MN 19 on the north edge of its campus.

Density: Completely missing from the planning documents is careful consideration of the pattern of development. Although land is limited, the College’s current development pattern at its southern edge (and especially in the Weitz “transition zone”) is very low density consisting single family homes renovated for college uses. The College should consider how it can fulfill its needs by more fully using the land available within this area including demolition of buildings to be replaced by a denser building pattern with buildings which are purpose-built for College needs.  Further, the College has placed very low value uses – surface parking – on key parcels further reducing its ability to make efficient use of its land.  Considering how parking can be accommodated in the middle of blocks or as part of other structures could expand the developable land.

Regulation: I’m more aware than most that city regulations have required some of the low value development which has taken place – zoning, parking requirements, setbacks, and stormwater regulations have all made it more difficult to use land efficiently. The City struggles with this issue and continues to incentivize suburban, low density, low return development (a movie theater and strip mall is looking for a subsidy right now) and here’s where College leadership – drawing on its commitment to innovation, quality, and sustainability – could help build support for a much denser campus building pattern which conserves neighborhood properties and helps the city craft the regulatory environment would help this happen.

Carleton can do better with Northfield: Carleton’s growth is critically important to the character of Northfield’s neighborhoods but where the college reaches into the neighborhood and downtown, the City’s interest is substantial. From a city perspective, the planning documents are startling in their lack of planning and design for the physical pattern of growth.  My hope is that the College will more actively engage the city and neighborhood in its planning and to think denser in its development pattern.  The College is a leader in sustainability in some ways, but it could help lead the City to more sustainable, distinctive use of land and infrastructure.

5 thoughts on “Urbanism in College Towns”