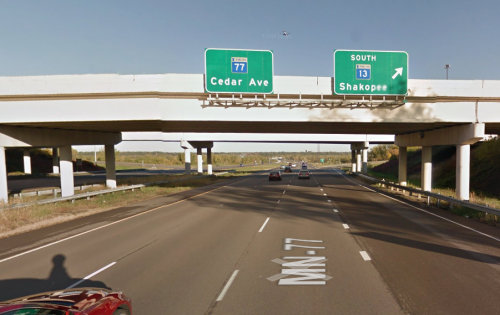 I grew up in Northfield, and Cedar Avenue was a common route from Northfield into the Twin Cities. The name isn’t signed between the Northfield border and Eureka Township, but I knew it by no other name. In fact, I remember my parents having to explain to me, when I was first learning to drive: “just follow the signs for 23… 23 is Cedar.”

So it’s caused me almost endless frustration, since moving north of the Minnesota River, that folks nearly always refer to the freeway portion of Cedar as “Highway 77”. Although as an urbanist I naturally lend more value to a city street than a freeway, it seemed to be awfully Minneapolis-centric to only lend the name of this long-established route to the street within the city limits.

Since first noticing the differences in usage of 77 versus Cedar Avenue, I’ve also taken note of many other differences in local names versus signage on freeways and other major trunk highways. Other than Cedar/77, the most established appear to be TH 62 Crosstown and TH 55 Hiawatha Avenue.

Does giving a highway a local name enhance community identity? Or does it dilute the value of a name?

And now, my list, based entirely on my own impressions and findings. Please add comments if you know of others, or find any errors.

Note: Updated table based on comments.

25 thoughts on “Naming our Highways”