In a previous post on my own blog, I mapped out properties in Minneapolis that were listed in the property records database as having been built before 1900. This was to get a sense of where older properties are and how many there are. It was also in response to a bout of local hand-wringing over the demolition of one ‘historic’ and supposedly ‘unique’ house, located at 2320 Colfax which even the strongest advocates for preserving the house admit it is actually just an inferior copy of another, beautifully maintained house a half-mile away, on 1716 Dupont.

Beyond 2320 Colfax, there are many other properties in danger of demolition. Using data that has recently been made machine readable, Minneapolis’ Vacant Building Registration list, and connecting it with Hennepin County property records, we can determine the year that these vacant or condemned properties were built. According to data accessed on February 7th, there are 571 properties on the list matching data in the Hennepin County property database. From this, it is possible to see that the “big years” for presently condemned properties ended with the 1920s. Beginning with the 1930s, there are fewer properties on the list; this may indicate there are fewer from this era and later which have been poorly maintained. With those dates in mind, I mapped the “critical” properties: those built before 1920 (373 of them; 65% of the whole list), and listed as vacant or boarded. If these properties aren’t preserved, they could well go the way of demolition. 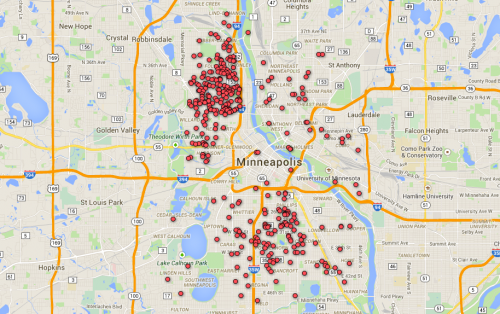 Click for a bigger version. Click on each property to see a little information, as well as a link to the corresponding City of Minneapolis PropertyInfo record. You can also use Google Streetview to take a peek at the exterior.

Why is this important?

There has been a lot of fuss recently about 2320 Colfax, which was never on the list of condemned properties, and is situated in a neighborhood with few dilapidated properties. In other parts of town, however (ones I’m guessing the loudest complainers rarely venture to), blight is more prevalent.

In North Minneapolis, for instance, a number of these properties are located within the swath of land cut through by the tornado in 2012, from which the area is still recovering. But, weather isn’t the only issue here. If you think 2320 Colfax is a convoluted issue, try considering the lack of movement on institutional racism and its influence on housing over North. Or, for a more detailed window into property issues, check out Johnny Northside, or Jeff Skrenes’ blog. Of particular interest are Johnny Northside posts by Camden Canary about landlord Daniel Gelb and John Hoff describing landlord Steven Meldahl which illustrate that even plain old property ownership is a complex tale involving slumlords, predatory companies offering to help people out with their mortgage, shell companies, and shady $1 multi-property transfers. These are issues that the city has so far demonstrated it is unable to solve.

This is not to say that because things are worse elsewhere, 2320 Colfax should be forgotten. Rather, if people care so passionately for this one property, where is the concern and candlelight vigils for all the rest?

Now that the demolition of 2320 Colfax is decided and just around the corner, perhaps some of this effort would be better spent in neighborhoods that desperately need revitalization. Given all the energy and celebrity attention directed at this single property, you’d think that it was Minneapolis’ last hope for preserving its history. As this map shows, there’s no shortage of preservation work to be done.

For a copy of the data, point your browser to the following links:

The above were constructed using data from the following: