This is Part Three in my series on the new Stillwater Bridge; the series continues with further design revisions and some odds and ends. Part One looked at the history from vague 1950s proposals to the doomed 1995 plan. Part Two covered further design proposals as well as the trials and tribulations leading up to the commitment to a final plan.

Since the selection of an extradosed structure (is basically a hybrid of a girder bridge and a cable stayed bridge), the aesthetic design has also been refined since these alternate designs from 2005:

Although not present in the very earliest concepts, three supports were thought necessary and included in initial designs.

As engineering advanced, design reduced the number back down to a pair of columns for each pier location, then one set of piers entirely, which lightened both the aesthetics and the construction costs. (The widely thrown out figure of $700 million has always been derived by taking the high side of initial estimates and rounding up). Despite spending an extra $6 million for the Minnesota approach work because the lowest bid wasn’t politically correct enough, overall costs have been revised downward several times as engineering advanced and as construction has progressed without incident and contingency funds are released.

The piers are designed to resemble reeds (although my sister said they looked more like tuning forks). Some visualizations show it as a stark white (and which may have been an early proposed finish), while it will actually be a duller buff color. My own theory is that buff was chosen as a compromise between blending into the sky, like a bright color would, and blending into the ground, like a darker color. 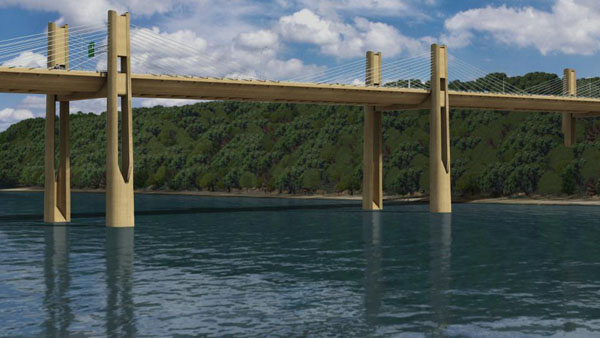 Lighting will be Mn/DOT standard davit (curved top) poles rather than WisDOT standard trusses as seen on the Hudson Bridge. In keeping with the theme of “understated elegance” as I like to put it, there will be cool white LED accent lights inside the piers. Some roadway lighting will spill onto the south set of cables; a technicolor light show like I-35W or Lowry isn’t planned, although blank conduits are going to be installed to leave the option open in the future.

My opinion on the aesthetics is that although I like the way the bridge looks from the roadway, in profile the overall height of the bridge looks a bit too high relative to the cables. Part of me really wants to see a true cable-stayed bridge closer than the Great River Bridge in Burlington, IA and I’m not sure it would have been entirely inappropriate here. An extradosed bridge is already quite modern looking and there are many other man-made structures outside of the Saint Croix Valley, so I’m not clear about the objections to seeing the cable. But at the same time, it’s exciting to see one of the first extra-dosed bridges in the US. Despite periodic rehabilitation work, Duluth’s Blatnik Bridge won’t last forever and a contract to study its eventual replacement was let last year, so perhaps that will be where Minnesota’s first cable-stayed bridge will be built.

The new bridge poses some interesting questions. MnDOT is, at least in theory, supposed to maintain all and only the highways as specified in the Minnesota constitution as the Babcock Amendment, later copied into Minn. Statutes §116.114, and those highways specified in later statutes, Minn.Stat. §116.115, §116.117, and §161.12. The present MN Highway 36 leading to the lift bridge being replaced is known legally as Constitutional Route 45, with the following description:

Beginning at a point on the west bank of the St. Croix River at Stillwater and thence extending in a southwesterly direction to a point on the easterly limits of the city of St. Paul, affording Stillwater, Lake Elmo, St. Paul and intervening and adjacent communities a reasonable means of communication, each with the other and other places within the state.

Therefore MnDOT is in theory legally obligated to maintain a trunk highway to the “west bank of the Saint Croix at Stillwater.” However, there are two series of “secret” trunk highways, the 800A series of highways MnDOT intends to maintain but does not mark, and the 900A series they maintain and want to get rid of such as Robert Street/MN 952A as a notable example. So the lift bridge will likely be designated with a 800A series number, say MN 836A. But it’s doubtful that the two blocks of Chestnut Street will continue to be a trunk highway, and may not even continue to be open to cars, so MN 95 will have to be close enough to the “west bank of the St. Croix” to fall under the requirement. In 2013, Legislative Route 339 was created as the formal number for the highway between MN 95 and the state line on the bridge. Also of note, MnDOT has simply ignored legal requirements in the past, for example those “Mr. Locally Important Person Memorial Highway” signs now need to be paid for by someone else, but in practice MnDOT would remove them if there was no outside funding sources even when they were theoretically obligated to maintain them.

What the Loop Trail Could have Been

Although the saving the lift bridge and the conception of the Loop Trail were two of the better results the project delays, the Loop Trail itself has a couple of major issues. First, there will be a gap in the trail in Houlton, Wisconsin, “filled” by shoulders on the old WI 35, and “Share the Road” signs on the old County E. As one of those people who won’t ride a bicycle on a road for any reason, I don’t care what the sign says or what the paint says, this is major problem for me.

Second, the west side along the river will be pleasant and the river bridges will be spectacular.  However, a large portion will be right next to the freeway with a 70 mph design speed in an area destined to become housing developments.  But in an alternate reality, it could have been built it along property lines on new alignment to the old County E. Beyond that point, the state of Wisconsin owns the property (shown in green) that could pull the trail away from freeway up to the bridge itself (this property was bought for the 1995 alignment).

Also of note, the properties in purple are publicly owned. The history of the land next to the DOT property along the river is unknown, but the ones on either side of the lift bridge are a former Stillwater city park that’s been closed for years. I sketched an idea for a pedestrian trail shortcut in brown, although I don’t know whether this is feasible or desirable. Another option to consider would be inquiring if the landowners might be interested in conservation easements as a buffer for the trail.

Why the interchange at County E?

Although it seems odd to put the Wisconsin interchange at County E rather than the existing WI 35, there were really two reasons for that. The first is that it better serves the area east of Houlton and south of Somerset along County E, that’s already started to develop. The second reason is they wanted to discourage “inappropriate” development at the top of the bluff.

What about closing the bridge?

It was never studied, but the idea of just simply closing the bridge and not building a replacement has been brought up; in fact, in 2011 the city of Stillwater demanded that the bridge be closed. My opinion is that any dollars spent on highway projects are good, even if it might not have the highest benefit to cost of all the possibilities. But assuming all the dollars would transfer to other projects, it’s fair to ask what else we could do with $330 million. For example $237 million would rebuild the I-35W/I-494 interchange (Presumably Wisconsin would use its share to build a new north-south freeway east of Hudson to connect the WI 64 freeway to I-94). Perhaps the residents on the Wisconsin side, which is now mainly planned for residential, would want a Walmart and Applebee’s built near Houlton to replace the ones they can no longer easily access, so such a plan might backfire if the goal is to reduce the impact of development. Closing the bridge would cost $34 million a year in lost time.

Similarly, options to reduce traffic were studied and found to be ineffective. An origin-destination study indicates most weekday traffic is heading from Wisconsin to Stillwater or the northern suburbs with very little to downtown St. Paul and points convenient to I-94. And drivers are already avoiding the bridge at peak times to the extent practical so further attempts at reduction would be ineffective.

As a final note, it will be interesting to see what happens a generation from now. On the public bridge viewing cruise I went on last summer, the DOT representatives were peppered with questions like “Why are you only building it four lanes wide?” and “Can it be expanded to more lanes in the future?” Official traffic projections are in the 40,000 range, which can still comfortably be handled by a four lane freeway, but 30 years later it’s obvious the New Cedar Bridge is inadequate, as is the Bloomington Ferry Bridge after 20 years. More likely in this case, I think the stoplights remaining on MN 36 will become a traffic apocalypse. Just like on sections of US 169 and MN 252, it was in large part the cities’ actions which caused interchanges not to be built initially. In both these cases, the cities changed their minds when they saw what a disaster traffic had become, so we’ll see what happens in Oak Park Heights.

There was already a 2013 request for the “Corridors of Commerce” grant funding that would have built an interchange at Osgood Avenue in Oak Park Heights, as well as at the four remaining signals west of Stillwater Blvd.  At least the Oak Park Heights intersections are being built with multiple turn lanes and flashing yellow arrows so capacity will be better than what it was.

Part Four of the series will go beyond the bridge to look at the potential future of downtown Stillwater.