Lots of news on the Southwest Corridor lately. You may have heard about it:

The question of which route is chosen is important not only for the light-rail system Hennepin County wants to build, but also for the rest of the metropolitan area in terms of rail transit philosophy.

That’s because this southwest route offers county commissioners a clear choice between offering suburban riders high-speed commuting to and from downtown jobs or providing slower service to more people through south Minneapolis neighborhoods.

Just kidding, that article is literally from 1987. Though more recently (yesterday) it was announced that probable costs of the southwesterly Green Line extension from Downtown Minneapolis to Eden Prairie, Minnesota have continued to balloon, this time to $1.99 billion dollars, or $2 billion dollars if you want to save money on ink.

Metropolitan Council Chair Adam Duininck “did not rule out the possibility that the project could be scuttled” and qualified that statement by saying he “really means it.” Governor Mark Dayton expressed that he was “shocked and appalled” and that the recent cost escalation “raise[s] serious questions about [the Southwest Corridor’s] affordability and viability.”

Appalled, maybe, shocked–probably not! The StarTribune article includes this helpful chart of past cost projections:

What are we doing? What is going on? What is happening? Is this normal?

The funny thing is that it is basically normal. Transit projects in the United States cost a godawful and absurd amount of money compared to other countries. We fly consultants from around the country to check our botched work and hire more consultants to hold community meetings for mental health reasons. We study water and study water and count trees and then plan to build a tunnel under a bike trail due to the objections of politically-connected people who bought houses next to a hundred-plus year old rail corridor who then sue us anyway.

We diddle around for three or more decades while the situation changes completely–and hey, no one questioned many billions of dollars of freeway expansion throughout the metro that helped places like Eden Prairie fill in with strip malls and single family houses in looping culs-de-sac. In the 1990s, the Midtown Corridor freight rail route was severed at Hiawatha Avenue forcing the reroute through Kenilworth. We got sort of serious about it and then waited ten years to get a 50% match from the federal government while the cost of the line doubled and we call it a deal: Success.

How Did We Get Here?

Here is a scan from Adam Froehlig’s good and sad website of a 1990 Hennepin County Regional Railroad Authority plan: 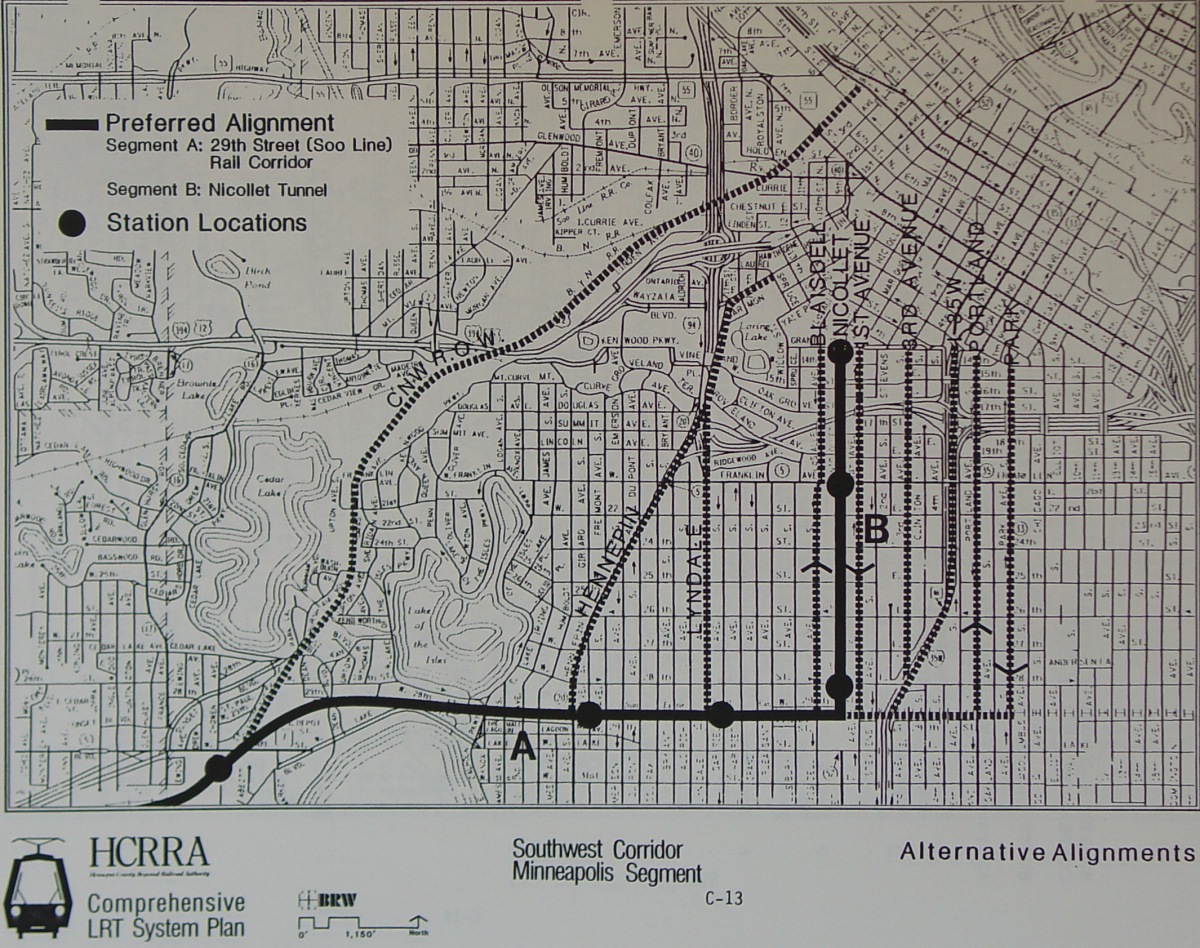 This version of the Southwest Corridor would have run in a tunnel under Nicollet Avenue and headed west out of the city on the 29th Street rail corridor towards Eden Prairie, though it did not go as far into Eden Prairie as the current alignment does. Including a tunnel in Downtown Minneapolis that would have connected what are now the at grade-level Green and Blue Lines, this all would have cost $209 million dollars, or $375 million dollars adjusted for inflation.

This is probably, like all projections, a wildly-optimistic one that did not account for the costs of tunneling around the Lost City of Coronado when it is found during excavation around the Uptown McDonald’s. But this would not have cost $2 billion dollars.

But at the very least we would have spent the past twenty years building that part of the metro area around it and its benefits. This is not specifically an argument for the mid-aughts Uptown Minneapolis-serving much-talked about alignment that looked much like the above. Nor is it an argument that ignores that we built two good transit lines in the meantime–we did good and smart things there to the extent we were politically able.

But right now in A.D. 2015 as we consider what this project has become, suburban barbeques and comment sections all across the Internet and also actual committee hearings at the Capitol are full of bizarre non-sequiturs about “choos choos,” and really, the entire premise of mass transit in Minnesota seems to be coming into question. It is easy and fun to dismiss them, but many of these people who are talking about not being able to move a sofa to a new apartment on a Metro Transit bus or expressing their worry about gangbangers taking Northstar to steal their Elk River lawn furniture actually vote in elections–unlike most of the people in my age cohort. They even hold office!

Said bizarre non-sequiturs may be related to the equally bizarre transit schemes (this, Northstar, the Red Line, the Gold Line, probably the Blue Line extension too) that have been cooked up by people working of off assumptions and plans from the 1980s and 1990s and compromised to the point of uselessness. These schemes have been successfully used by politicians and pundits outside of the 494/694 beltway to gin up antipathy towards transit among some suburbanites, and particularly misplaced antipathy towards the entire idea of the metro in outstate Minnesota. This is unfortunate, in our democracy and in our state of Minnesota in which reliably transit-friendly voters are clustered densely into a small number of total legislative districts.

What Will Happen Next?

Who knows–can we beat institutional inertia built up over three decades? We’ve already spent $59 million dollars planning the Southwest Corridor, or the equivalent of two or three arterial bus rapid transit lines. Can we just start over? Let’s actually start the whole thing over, rethinking this entire set up — scrap the Counties Transit Improvement Board (CTIB) and five county quarter-cent sales tax and its support of things like the $500 million dollar Gold Line bus rapid transit line to Lake Elmo (that history suggests will not be particularly successful) just so we can give something to Washington County, which contributes less than 10% of what Hennepin County does.

Go back to the legislature and get authority for a half- or whole-cent sales tax in Hennepin and Ramsey Counties, and then just build stuff. Plan for the future. Don’t wait a decade for a federal match so you can pretend you’re getting half for free, just do it. Build a light rail connection between Downtown St. Paul and the airport. Build a rail line in the Midtown Greenway. Build something, certainly, out towards Hopkins. Build grade separated rail through South Minneapolis, somewhere.

It doesn’t work this way, unfortunately, but a half-cent sales tax in Hennepin and Ramsey Counties only would almost certainly be approved in a referendum if people thought it was going to be used for things less dubious than building a tunnel under a bike trail.

The issue is not whether or not good people with good intentions fought hard to do anything, the issue is that the current system is producing outcomes that aren’t worth defending. Where is the vision here? The other side has laid out their own regressive vision. What should we be fighting for?

Note: The author pulled out a visible amount of his eyebrows while writing this post.

26 thoughts on ““All Options on the Table” with Southwest Corridor”