With the coming of LED technology, now is a good time to take a look at  Mn/DOT’s lighting of the freeways and highways of the metro.

Traditionally standard luminaires  on the freeways have been a “semi-cutoff” design. Fixture selection is the balancing act, semi-cutoff fixtures throw light to the sides and even up, causing glare and light pollution, but are very good at dispersing light. Full cutoff fixtures offer more control, but often need more fixtures or to be mounted higher to compensate for the fact that more light is directed down, rather than out. Tiring of legislative bills continuously being introduced to force them to use full-cutoff fixtures (which MN/DOT has traditionally done only around the airport), they introduced a shallow glass luminaire to split the difference and hope that would be good enough, both as far as light spread and quieting critics. There are very few semi-cutoff fixtures left on the freeways, mostly in areas dating from the 1980s or later where full replacement of the system hasn’t been required, such as MN 77 or I-394.

Early 1950s vintage semi-cutoff light on the state fairgrounds. This type was used on older portions of MN 100 into the late 1980s.

Davit Poles: These are the Mn/DOT standard, and although not used by most other states, a few do, like Rhode Island and North Dakota. They are actually two pieces, the top piece slips over the bottom and curves between the pole and luminaire, giving a modern and seamless appearance.

Some poles are mounted on the concrete in the median, and some are on the sides of the road.  Lights in the median are more economical to install, make use of wasted light emitted towards the back of the fixture, are less vulnerable to knockdowns. However they must be maintained on the left side of the road, and lane closures are required if there is not a full shoulder. Current practice is to mount them on a concrete median if one exists and there is a full shoulder.

Relamping a luminaire on a davit pole, Bloomington.

Tenon Poles (“Turnpike” Style): These use poles farther back (less likely to be hit by texting drivers), with floodlights aimed forward at about a 45 degree angle. For a while Mn/DOT liked these due to reduced maintenance, but they caused a lot of light spill into neighboring residential neighborhoods, and equipping them with shields reduced their effectiveness. They’ve also been problematic to convert to LED, but now they figured out that a standard LED fixture pointed down will work for roads up to four lanes, and have found special fixtures for wider applications.

“Turnpike” luminaire on I-494, Plymouth

Bent Straw Poles: In some areas a more decorative look is desired. Mn/DOT uses bronze “bent straw” pole poles with square “shoebox” luminaires to provide something somewhat better looking than standard davit poles while still being efficient and easy to maintain. Notable locations are the I-35E “Parkway”, The Wakota Bridge, and MN 36 and Stillwater Blvd.

Truss Arm Poles are the oldest poles that can still be seen occasionally in Minnesota.  Mn/DOT has not installed new ones since the 1970s and almost all have been replaced, but there’s a few stragglers around. These came in both the straight and curved varieties. Also, the Hudson Bridge, built by Wisconsin, has straight truss lights on both sides of the river (While the St. Croix Crossing, built by Mn/DOT, will have davit poles). Generally truss arm poles are used in the eastern half of the country while a different style, called the “upsweep” style is used in the west.

High Mast Luminaires are the ones on those super tall 100-120 foot poles. Mn/DOT has traditionally liked them due to ease of maintenance (the fixtures are mechanically lowered on a pulley for relamping) and they give a smooth, even light enabling drivers to easily discern complicated interchange. After complaints about light pollution, Mn/DOT now avoids installing them in residential areas, and in fact has replaced one (at MN 62, US 169, and US 212) with davit poles.

High Mast lights being erected on I-494 and MN 100. Fixtures have since been converted to full-cutoff with shields to control light trespass.

Since the 1950s, High Intensity Discharge (HID) lighting has been predominate for lighting streets, due to their compact size, efficiency, long life, and lack of concern about color rendering. Light is produced when electrons are bumped outwards away from the nucleus due to the input of energy, when they fall back into place they emit the extra energy as light. In fire and incandescent lamps the energy comes from heat; HID lamps are much more efficient using an electrical arc directly.

Low Pressure Sodium Vapor: Commercialized in the 1930s. these use sodium metal (combined with neon and argon to get it started). They are bulky and produce a pure yellow light. Astronomers like them because if they see something pure yellow in their telescope they know what it is. These were used years ago around Met Stadium, and on major north-south streets in Richfield. Mn/DOT never liked them because it was difficult to control the light. A surviving installation is at the Thunderbird Hotel parking lot in Bloomington. Another notable use is bridges over the Mississippi, for example the “Big Blue” bridge in La Crosse, where the yellow light doesn’t attract mayflies.

High Pressure Sodium Vapor: In the 1960s High Pressure Sodium was  (HPS) was developed. These have a golden hue and are now the de-facto standard for street lighting. The gasses are at higher pressure and mercury is added to decrease the size needed and add other colors than pure yellow to the spectrum. Usually 100 and 150 watts are used for residential streets, 200, 250, and 400 for wider streets and freeways, and 1000 watts for the 100 foot towers on the freeways. The 1000 watt lamps are roughly 8 times as efficient as household incandescent. The initial HPS installations in the Twin Cities that I recall, from at least the 1970s, were I-35W in south Minneapolis. I-35E north of dowtown St. Paul, and Lyndale Ave in Bloomington.  New installations from around 1980 on were HPS, with mass conversion in the early 1990s.

18 Watt Low Pressure and 35 watt High Pressure Sodium Vapor lamps. These are smaller than are used for street lights, more typical for small wall mounted outdoor lights. They each produce about as much light as a 100 watt incandescent.

Closeup of a new Low Pressure Sodium lamp. The silver drops are sodium metal. Since sodium is violently reactive and will attack stadard glass, water, air, and just anything else the inner tube is made of the same material as laboratory beakers.

Mercury Vapor.  Dating from the early part of the last century and refined in the 1930s, mercury vapor gives a bluish-green light, unless a red phosphor has been added on the color enhanced version, which gives them a reddish tinge.  Mn/DOT has long since eliminated the last of these, but older installations still exist on some city maintained lighting and on older Minneapolis parkway fixtures. Mercury Vapor, while extremely long lived, is relatively inefficient compared to other HID bulbs. New ballasts have been banned for several years, and new bulbs will be banned starting in 2016. Although not describe as such, standard fluorescent lighting can be though of as “low pressure mercury vapor”.

Mercury Vapor lights are extinct from the freeways, but can still be found on the Minneapolis Parkways. This is a standard mercury lamp, color enhanced have a red phosphor giving them a pinkish hue.

Metal Halide is a refinement of mercury vapor.  Developed in the 1960s, Metal Halide adds additional substances to improve color rendering and efficiency at the cost of bulb life. They last 10,000 hours, or half that of other HID lamps.  Metal Halide was always the choice for car dealerships and indoor applications where color was important; it’s becoming more common for general outdoor use. Newer Minneapolis parkway fixtures are metal halide, as is the Fish Lake Interchange . A further refinement is ceramic metal halide that produces a warm, pleasing light. They’re not used here on highways here but Chicago has been adopting them.

As fixture costs have gone down the energy efficiency and long life of LED fixtures are becoming attractive. The I-35W bridge was notable as the first use of LED lighting on an interstate highway in the country. At the time fixtures that were direct replacements for conventional luminaires weren’t available so they had to space the poles closer together. 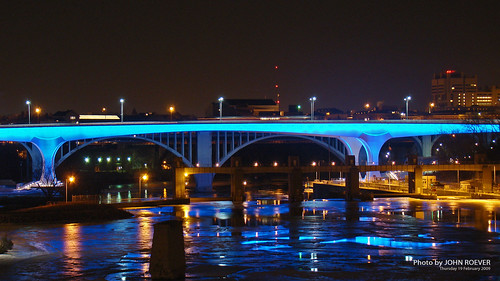 Mn/DOT continued to move cautiously. Individual manufacturers submitted test units for approval, which were installed along I-494 in Woodbury, then more extensive installations on some of the Minnesota River bridges were installed. Then new installations, like MN 62 east of Cedar, utilized LEDs, and longer freeways stretches, such as I-94 between the downtowns were converted.

Finally the mass conversion to LEDs is underway. LEDs use about half the energy as traditional HPS fixtures and last several times as long.  Mn/DOT feels that the point has been reached where further improvements in reliability and cost will be more incremental, and do not offset the benefits of immediate mass conversion. Thus three contracts have been let this year to convert virtually all of Mn/DOT’s metro lighting to LEDs. The exception will be high mast fixtures,  where an LED fixture that can put out enough light that has been fully evaluated and approved by Mn/DOT does not exist yet. (A LED high mast setup is being tested at US 61 and I-494, but it does not equal the brightness of the conventional fixtures).  Maine has had a retrofit made that does equal the light output, but some agencies are leery about modifying existing fixtures due to UL approval issues.

Also excluded are the tunnels, which are relatively new installations using fiber optic light pipes to provide a very even light.

There have been some issues. At one point I noticed about a fifth of the lights on the I-35W Minnesota  River Bridge were out. Mn/DOT told me that they had been hit with a power surge and the power supplies were blown out. Being a test installation they had to have more shipped in from the manufacturer. HPS fixtures with their magnetic ballasts are essentially immune to power spikes. I’ve also noticed sporadic outages, and the Mn/DOT list of approved LED fixtures has already changed several times. With the old sodium fixtures they would not go around chasing individual burned out bulbs, but their intent is to address individual LED fixture failures due to warranty issues.

I’m old enough to have remembered the transition from the moonlight glow of mercury vapor to the golden hue of sodium lights, and now back to the blue of LEDs.

6 thoughts on “The Street Lights of the Freeways”