This week, 9th Street South was repaved and its lanes were painted, including a mildly buffered bike lane. Obviously, it was a disappointment to many bike advocates that the new lanes are not protected. I covered this extensively in a previous article, lamenting the fact that, if this project went forward without protected lanes, we would have to wait another decade before an opportunity would come to install them.

In spite of that, we should be thankful that these buffered lanes are an improvement over the substandard lanes that preceded them. 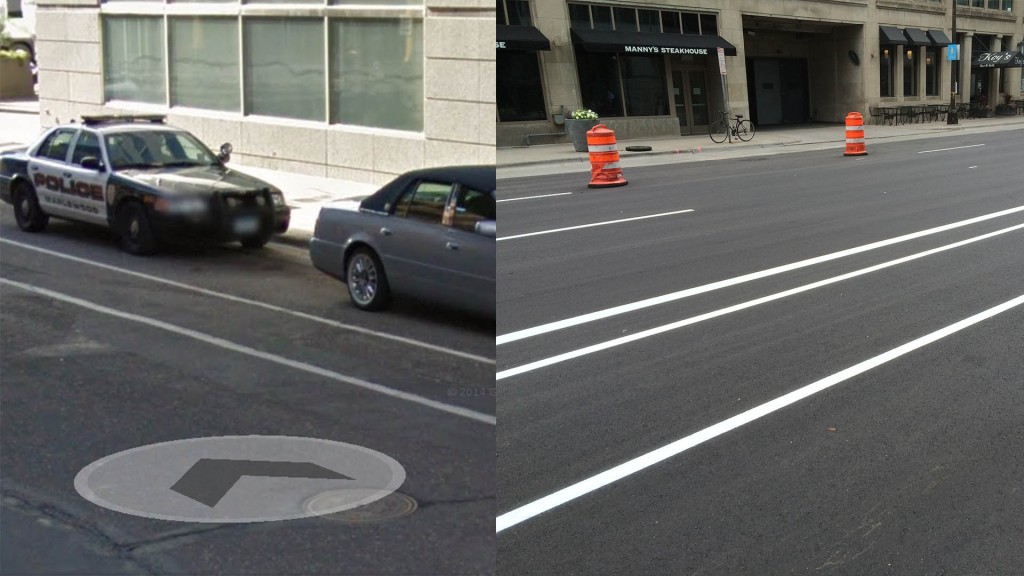 9th Street bike lanes before and after the 2015 repaving. For now…

However, there’s something else to be happy about: protected lanes may not be a decade away after all.

After my article went live a month ago, the city council received many outraged emails from the streets.mn audience in support of the protected lanes. Soon after, a group of volunteers from the Minneapolis Bicycle Coalition gathered data on the corridor and brought a detailed and well-researched case to the city and surrounding businesses for putting a lane in on 9th Street. They also helped to dispel some misconceptions about the lane, like that it would remove all parking on the left side of the street.

Now, the city is seriously considering redoing the lanes next year and installing the protected bikeway 9th street needs. Though the delay is still frustrating, at least there is now more time to work with businesses to ensure their reasonable concerns are addressed and to gather feedback from bikers on how the lane will be laid out.

So, what can we take away from this kerfuffle? First, Minneapolis Public Works needs to engage the public earlier in the process. Second, thanks to you, we are no longer facing the certainty of a decade without a protected bikeway on 9th. However, that doesn’t mean we’re done. There are still powerful people who can and will block or delay important bikeways, as Saint Paul found out with Cleveland Avenue. So, we need to keep up the pressure on the city to pass their Protected Bikeways Plan and to actually follow through on it. You need to contact your city council members, volunteer with a bicycle advocacy group, attend public meetings, or even just go to an Open Streets event. There are so many ways to help make this happen. I look forward to seeing what we can accomplish and what Minneapolis’s streets will look like years from now.

24 thoughts on “9th Street Protected Lanes: Not Dead Yet”