“You can’t build your way out of congestion”. Although this is a longstanding liberal dogma, I’ve never really subscribed to it, at least in the theoretical sense that is seems to be brought up. But recently I noted in comments to an article that Kansas City seems to move pretty well. Recently I found a good source of data from the Texas A&M Transportation Institute that sheds some light on this question.

There’s all kinds of data going back to 1982, so I had to select data to chart. Choosing freeway lane miles per capita was an obvious choice for how well built an area’s freeways are. For congestion, I chose annual hours of delay per auto commuter, because how long you’re stuck in traffic is the most noticeable and obnoxious thing for motorists, not the value of your time, the congestion index, or other more abstract metrics. Here’s the nationwide average data. 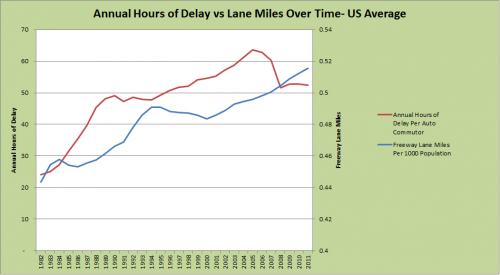 Now here’s the data for the Twin Cities. Although the scale is exaggerated, the slight dip in freeway miles per capita in the early 1990s is still a deep chasm. Basically nothing substantial got built through the 1990s while population continued to grow. Finally a series of funding bumps leveled off the decline, and eventually we are back at the 1980s level. 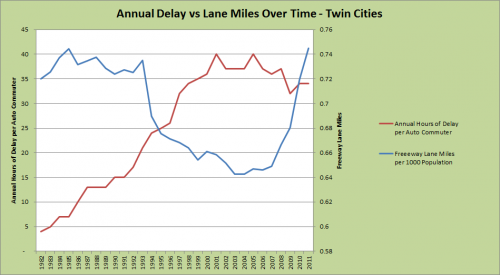 In both cases the congestion curve actually bears more relation to VMT (Vehicle Miles Travelled) than lane miles per capita. Congestion delay was reduced because the Great Recession cut the size of the economy. The well-documented aversion of millenials to driving may also be a factor, since VMT have been slow to recover since the Recession, as shown in the next chart.

Regardless of recent VMT trends, traffic projections assume congestion will worsen. Even the St. Croix Crossing, which has been made out by the anti-car forces as a paragon of excess, is forecast to be congested in the next 50 years. (And it’s worth noting that with the signalized intersection that Oak Park Heights insisted on, the capacity of the Minnesota approach road is a lot less than the traffic apocalypse that was US 169 in Bloomington). 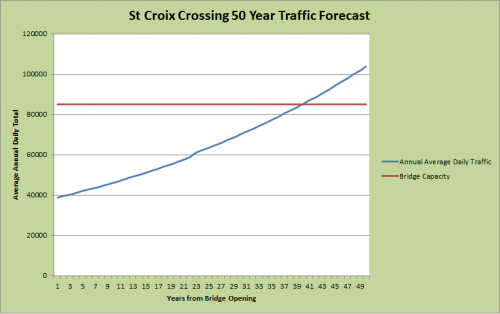 But let’s not abandon all hope of proving that freeway lane miles can make a difference in congestion. Everyone knows that Kansas City flows better than New York City, so another comparison would be how congested various cities are compared to how much they’ve built to date. Obviously there are cultural and geographic differences influencing annual hours of delay per auto commuter, but if there is a trend it could be revealing. Thus I’ve run the data through a data smoother to see if there’s a trend that’s getting masked by some of the choppiness. 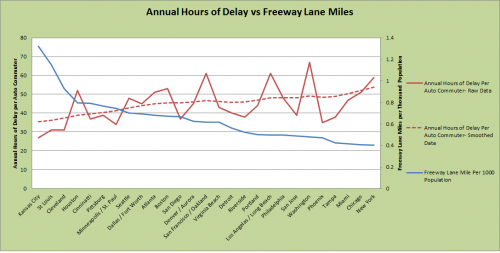 As for the outliers in the middle of  lane miles, I’d suggest that Miami, Phoenix, and Tampa have a large number of retirees that don’t need to drive in rush hour. Washington DC has a large number of government office workers,  San Francisco has significant geographical barriers, LA, Houston, and Atlanta have significant car cultures. The Twin Cities is a low outlier, I’d suggest despite a lot of choke points at under-built river bridges, overall our unique “grid” system to freeways makes it easy to route around congestion.

I also looked at the effect when arterials are factored in (using a conversion factor) from a different source that did a . Rather than see the same pattern, to my surprise this is what I saw. 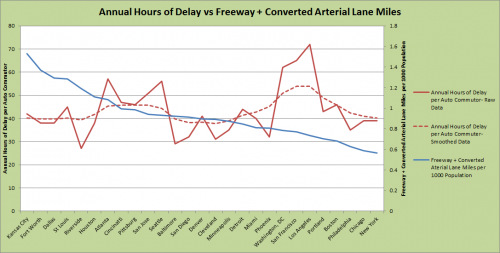 I see no obvious correlation. This data is from back in 1999, but if you take it at face value it seems contrary to conventional wisdom that a good arterial system can relieve freeways. I’d suggest that there’s a strong motorist bias towards freeways, and directing resources other directions can even be counterproductive if there is an opportunity cost of not improving the freeways directly. Wide suburban-style roads are nice to get quickly from your neighborhood to the freeway, but it seems the quantity of them has little effect on the overall congestion on the area. In real life, witness what a horrible disaster area I-494 in Bloomington is at rush hour, compared with how well American and 77th move, both wide suburban style roads designed specifically to attract traffic from I-494.

As a side note there was an article recently that suggested that transit, while obviously worthwhile, should not be promoted as reducing congestion. So what is the effect of transit on average hours of delay per auto commuter?

Looks like the most congested cities and the ones with the best rail networks are the one where transit makes the biggest difference to motorists. In other cities apparently most people that can drive already do so. Still, it may be worth promoting it as such as kind of a white lie. As part of society I agree that we should have transit, but there’s a lot of people around me that are either apathetic or against it so promoting it as something to get other people off the roads they drive on may be the only way to get broad support. Like this Onion article.

As a final side note, here’s freeway lanes miles over time for some of the cities. In addition to Kansas City, Minneapolis, and the national average, I chose Chicago because of its famous congestion, Phoenix because of its aggressive highway expansion due to a local sales tax, Houston because of its famous auto and suburban growth culture, Portland because it’s the anti-Houston, 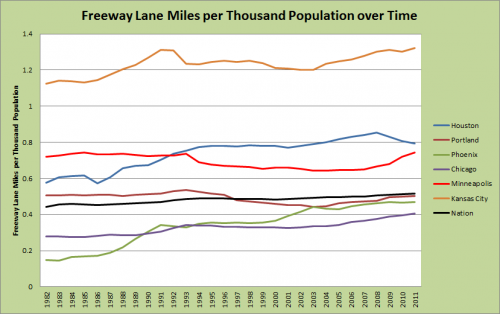 Overall, my views remain unchanged. It’s always possible to build our way out of congestion in a theoretical sense. The street in front of my house has been “built out of congestion”; with only two lanes, it’s not filled with people induced to come down from Blaine and drive back and forth on it just because the capacity is there.  Maybe we could build I-35W out of congestion with 15 lanes in each direction. Of course we can’t as a practical matter, but it’s still worthwhile doing something; if we can’t fix I-35W we can make a difference elsewhere rather than just repeating the dogma and doing nothing.

And of course self-driving cars are on the way, which will be the ultimate solution to the problem. Even if there’s still a bit of congestion, taking a nap or working on your laptop will make it not wasted time.

11 thoughts on “Can You Build Your Way Out of Congestion? Let’s Look at the Data”