It’s mid-July, and that means one thing in Hopkins: Raspberry Festival. This year, though, officials kicked off the city’s biggest week with a little tactical urbanism. The city closed Eighth Avenue to cars Saturday and set up temporary features that gave people a taste of what the street’s future could look like.

Eighth Avenue is the main entrance to Hopkins’ downtown for vehicles headed west on Excelsior, but the current design does more to hide Mainstreet than advertise it, particularly with the two buildings that sit at the Excelsior-Eighth Avenue intersection. That’s a particularly big failing when a Southwest LRT station that could attract visitors is planned just across the county road.

The city has embarked on a $2.8 million redesign to fix those issues, give the avenue a facelift and make it more pedestrian focused, as well as take care of routine capital improvements. Hopkins has christened the project “The Artery” because of the art-centered focus.

The extra attention from the Raspberry Festival offered the perfect time to test some of the elements and see what people.

One of the obvious shortfalls in the downtown is a gap between the Lake Minnetonka LRT Regional Trail just north of Mainstreet and the Cedar Lake LRT Regional Trail that parallels Excelsior. Cyclists aren’t by any means in danger traveling the three blocks between the two trails, but it’s a hole in an otherwise stellar network that squeezes four regional trails into the city’s four square miles.

For the tactical urbanism “Artery,” the city set up cones and lined up potted shrubs to create a makeshift cycletrack. 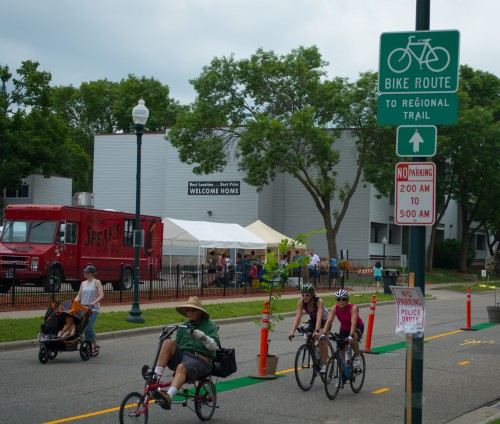 For a few hours, cyclists had a connection between the two regional trails. / Credit: James Warden

I was curious beforehand whether there would be many people using it, but a steady stream of cyclists pedaled by throughout the event. 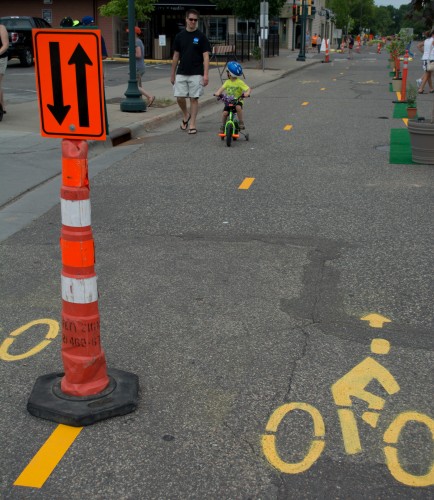 I’ll admit that one of the lessons for me was “don’t stand in the cycletrack.” Whereas I’m used to having streets either entirely prohibited to pedestrians at all or entirely for pedestrians, I’m not used to streets where space is carefully set aside for each user (I do the same thing when I travel to places like Vancouver that already have good cycletrack networks).

One of the key points of street redesigns is to reinforce their pedestrian focus. On Saturday, children had ample room to scribble with sidewalk chalk and blow bubbles in space normally reserved for vehicles. 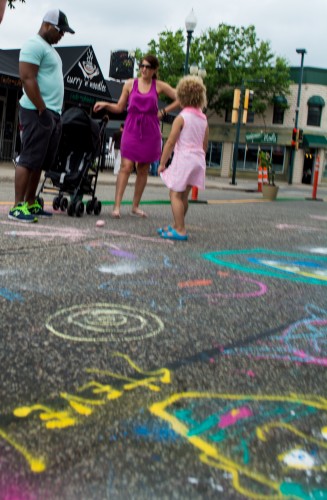 My favorite parts of the event were the lawn games and inflatable furniture because of the opportunities they offer for spontaneous play. I love a good community festival as much as the next guy, but making activities like this a part of the streetscape means families don’t have to wait for a festival to have fun. There’s always something fun to do. 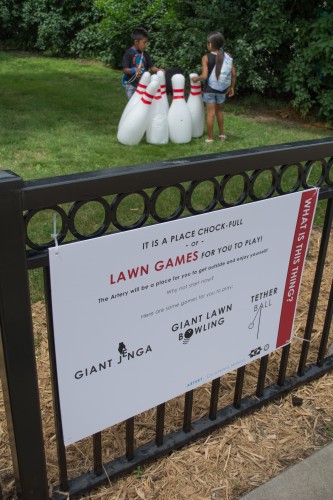 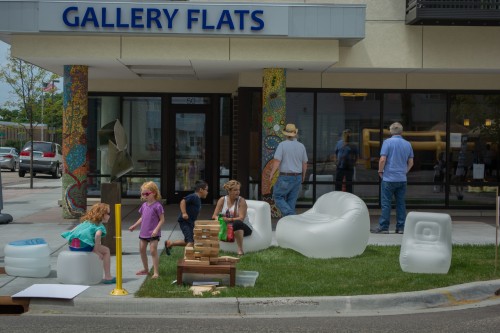 As I mentioned above, art is a big focus of The Artery. The Hopkins Center for the Arts hosted a neat fundraiser where they collected donated pieces of art and resold them to raise money for the organization. My wife even picked up a nice abstract piece. 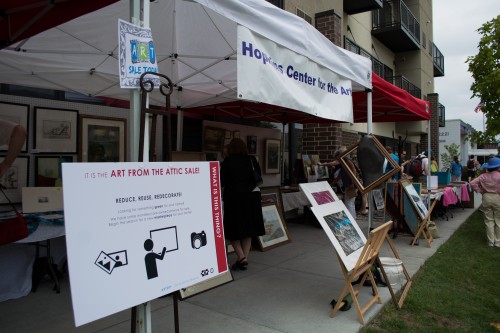 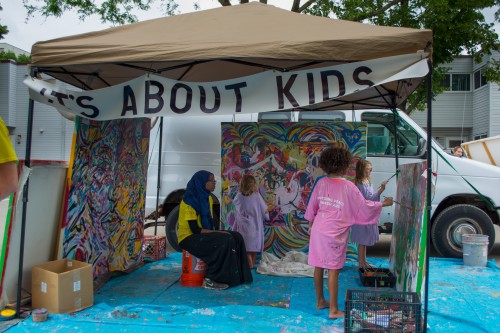 And an artist who plays with perspective painted a nice piece in chalk that looks from certain angles as if you’re in the midst of the Minneapolis Moline factory that drove so much of Hopkins’ early growth. This piece is temporary, but quirky art like this could be a nice way to both add a touch of history and give something people to gawk at. 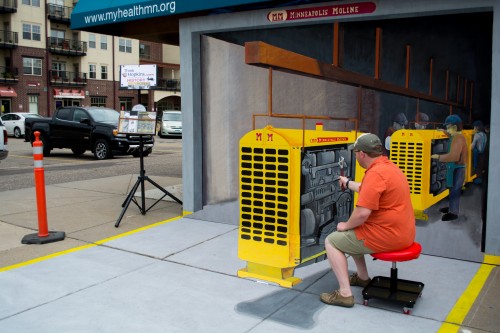 An artist’s chalk drawing on a sidewalk and building wall gives the illusion of a Minneapolis Moline engine hovering in place. / Credit: Christa Meland

Current designs plan for a portion of the street that can easily be converted to performance space. For now, a portion of a parking lot was set aside for music. 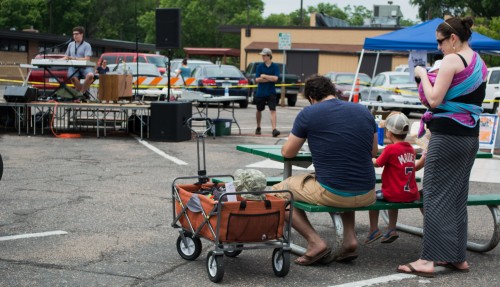 A families listens to music in a parking lot off Eighth Avenue. / Credit: James Warden

Of course, the whole point of this event was to get feedback on the proposals that the city is considering. People were welcomed by a chalkboard asking what they think makes a good street. 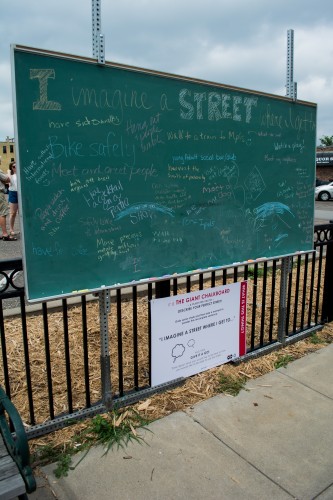 Dozens of people shared what they want to see in a street. / Credit: James Warden

There was also a survey that allowed people to share what features they wanted to see, and Community Development Coordinator Meg Beekman spoke with people about the street. 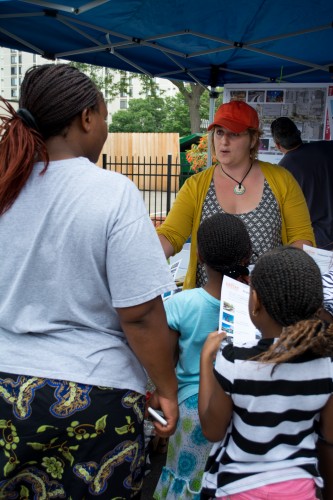 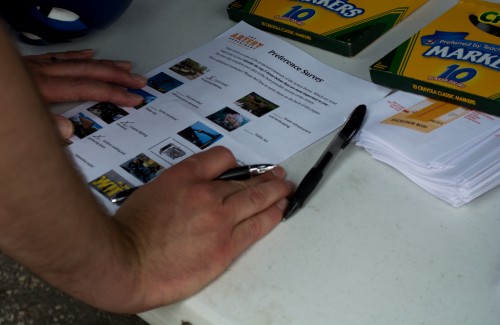 A man fills out a survey about improvements he’d like to see to Eighth Avenue. / Credit: James Warden

Clearly, there’s still a lot of work to do before construction begins on the project in 2016. But hopefully the city got some feedback from this event that they wouldn’t have gotten at the traditional public hearing or official meeting. I’d love to see officials start looking at more ways to bring their ideas to the public in a tangible fashion.

8 thoughts on “Show, Don’t Tell: “The Artery” in Hopkins”