I was up in Brainerd this weekend, visiting my sister. I’ve been up there several times since she bought a house just south of downtown a year and a half ago. 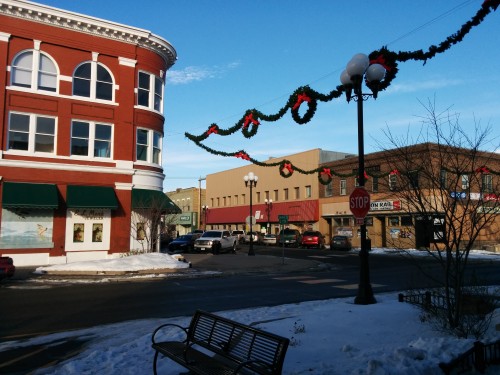 Brainerd has a nice, walkable downtown. It has wide sidewalks, trees and benches, and active storefronts. Compared to the neighboring Baxter strip, it’s a breath of fresh air. But how to get downtown?

The main north-south spine of Brainerd is South 6th Street, which formerly carried Highway 371 (and still marked as “Business 371”). And it’s by far the most direct option to get downtown for anyone living in the south-central section of Brainerd: 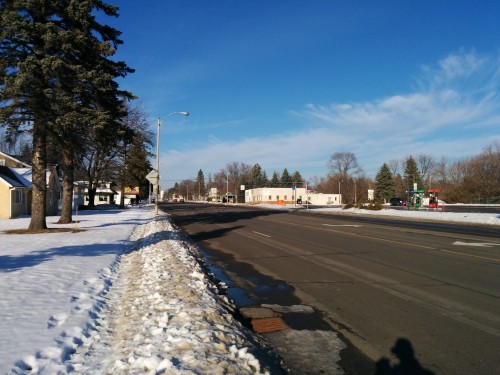 November 2014. Technically, there was a sidewalk underneath that snow. Photo by author.

It’s a wide, five-lane stroad, with no parking, few trees, little lighting, and narrow sidewalks. It skimps on everything but number of lanes and width of those lanes. Currently, the four travel lanes are 12′ wide and the center turn lane is about 14′. All this for traffic volumes that barely scrape 10,000: 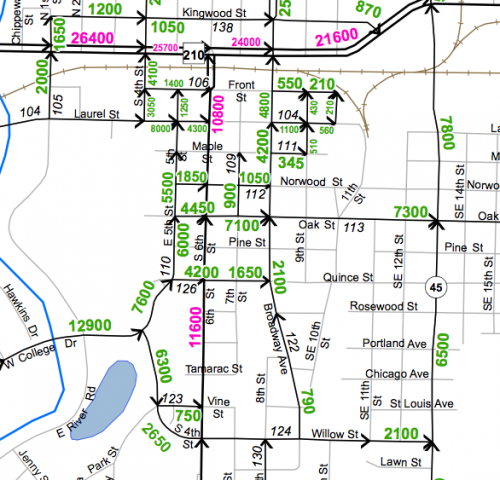 The good news is that Brainerd had an opportunity to have the street reconstructed by MnDOT in 2017. MnDOT offered the community the choice of a 3-lane section or simply rebuilding, as is, in a 5-lane section. Local advocate and Strong Towns founder Chuck Marohn pushed for designs similar to the three-lane, with a more context-sensitive approach in the different sections.

The bad news is Marohn’s efforts didn’t seem to be in line with the Brainerd City Council’s actions. For the most part, Brainerd chose the 5-lane section — widening the street out to 5 lanes and making it more pedestrian-hostile as it approaches downtown. Even the 3-lane section that is being built (south of Quince St) is shockingly unambitious. Despite many indications that 10-11′ lanes are the safest for calming traffic (and even very car-oriented engineers preferring 11′ lanes), MnDOT’s plan offered the community 12′ travel lanes and a thirteen foot center turn area.

Opportunities for planting along the corridor appear to be unseized, but that could change. However, since the sidewalk narrows to 9′ north of Quince, trees likely could not be sustained near downtown.

Why would a city do this –throwing away an opportunity to transform one of its most important streets, all for nonexistent traffic?

I wrote the Brainerd City Council in November asking them to support a 3-lane design. The only response I received is revealing. After expressing concern about possible cut-through traffic from a calmed 6th Street, this Councilman went on to explain:

Business 371 is named for that very reason. For business.

We also have a lot of future growth to deal with. For a example [sic] there are 640 acres own by the Mills family for residential housing just southwest of Brainerd that will have high traffic counts when it gets developed.

Business 371 needs to be five lanes.

I won’t opine too much on the Councilman’s response, since just about everything I could say has been expressed many times by Strong Towns. But, in short: we should sacrifice the town we have today, in the hope that we will one day be able to encourage more traffic to serve new greenfield development. A symbolic gesture that I’m sure was intentional, he did not once refer to 6th Street by its local name — only as “Business 371”.

Wasting an opportunity to seriously improve 6th Street is disappointing for Brainerd, but I find it even more troubling about what it says for MnDOT.

Ostensibly, Minnesota has a Complete Streets policy. So does Brainerd (adopted slightly after the decision to support an incomplete 6th Street). So why would MnDOT even offer such a bloated option to a local community? And why would even the “road diet” version offer proportions that are dangerously wide and encourage speeding?

Unfortunately, I don’t know the answers. But I do know that this project represents nothing good about MnDOT’s ability to implement Complete Streets.

19 thoughts on “In Brainerd, Business 371 is for Business”