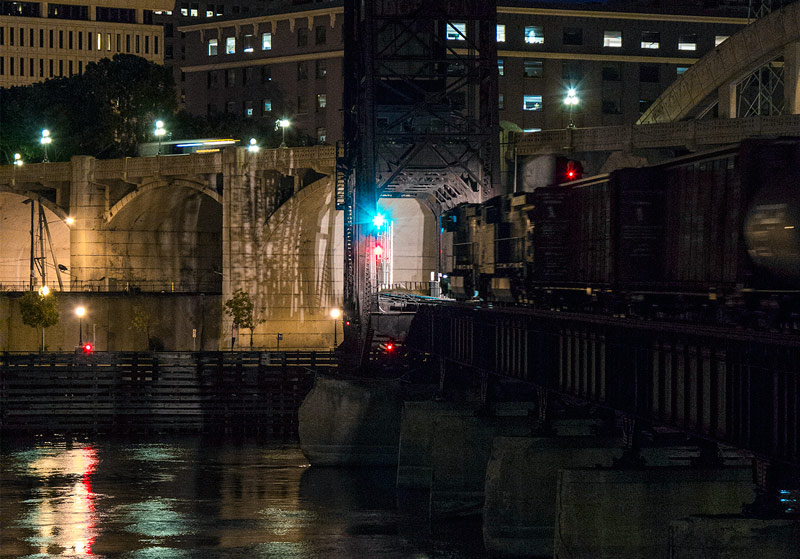 Up here in Saint Paul, the Mississippi River passes within blocks of where I live and work. As the tenth anniversary of Hurricane Katrina approached, I started looking toward the other end of this waterway that links the Midwest to the South because I wanted to better understand the lasting impact of the storm on one of my interests, the nation’s passenger rail system. Ever since the hurricane happened, service on Amtrak’s Sunset Limited route has been suspended east of New Orleans, and the reasons why haven’t been well-defined.

What could have damaged tracks so badly that it would still be out of service ten years later? Even though Katrina was the deadliest storm to hit the U.S. since 1928, was its impact so great that we couldn’t restore the modest service that was running before the storm? In reality, the hurricane is probably just a convenient excuse for the halt of passenger operations and not an outcome that should be tolerated.

Surprisingly, when Amtrak formed in 1971, the system didn’t include any service between New Orleans and northern Florida. It took over two decades of campaigning by the region before a direct link was reestablished in 1993. Even when the train did run on the line, it was only three times a week each direction—the same frequency that it’s always had on the route’s western section from Los Angeles to New Orleans.

I decided to take a look at the layout of tracks along the route to try to understand why it has continued to take so long, using a map format like the one I used on the Empire Builder route several months ago. I focused on the 770-mile stretch that is still suspended between New Orleans and Orlando.

When I started, I expected to find something obviously out-of-place along the route, but as I traced the line through Louisiana, Mississippi, Alabama, and Florida, everything seemed to be in good order.

However, it was obvious from the aerial imagery there were a few different sections to the corridor which carry different amounts of traffic and are maintained to different standards. I compared my map to railroad crossing data from the Federal Railroad Administration (which I used to make the map in my previous post) and made note of these five main segments:

CSX Transportation is the railroad that owns the tracks all the way from New Orleans to Orlando (the western segment of the train that is still in operation is run on Union Pacific tracks from Los Angeles to Lake Charles, Louisiana, where it switches to BNSF tracks for the rest of the route to N.O.). Their heaviest damage in the storm was between New Orleans and Mobile.

Just east of New Orleans, the tracks cross the Intracoastal Waterway, which connects Lake Pontchartrain to the Gulf of Mexico. The line then passes into Mississippi and through communities such as Bay St. Louis, Pass Christian, and Biloxi, which were among the places hit hardest by the wind and storm surge during the hurricane. In Pass Christian, the surge measured 27.8 feet and was combined with a relatively high tide.

That level of surge is enough to completely obliterate homes and other modest-sized buildings. The rail line suffered too as tracks were washed out and bridges destroyed and electrical signaling huts that were flooded with saltwater as the water crashed ashore. In some places, ships and barges floated up onto the ground and eventually settled onto tracks as the waters receded. 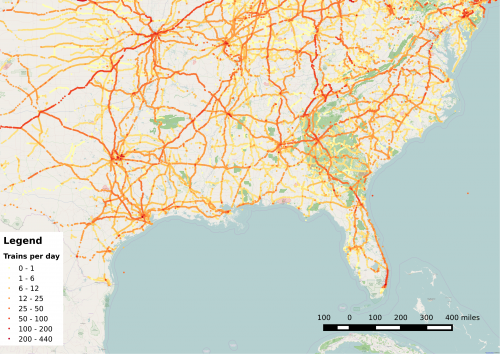 Train traffic volumes at railroad crossings in the southeastern U.S.

About 100 miles of track were severely damaged or destroyed, but with 15 to 18 trains per day, it was important for the railroad to be repaired and brought back into service. The railroad and several contracting companies worked for four months to restore service between New Orleans and Mobile.

It’s less clear how bad the situation was in Florida, along the second notable section of track in my list. Pensacola did experience a modest storm surge of about five feet, but that didn’t cause as much damage, so the line was back in operation pretty quickly. Only the track nearest Pensacola would have been affected by storm surge—most of the distance from Flomaton to Tallahassee is inland and would have only been damaged by wind and creeks and rivers swollen by rain.

And yet, this relatively protected stretch of track is probably the real culprit preventing the resumption of service. With only two or three trains per day, there isn’t enough revenue from freight traffic to warrant maintaining tracks at the level that passenger trains really need.

I was surprised to see train frequencies were so low along that stretch of track, since the Gulf Coast seems like an important economic region to me. But rail freight tends to move in a more hub-and-spoke pattern like airlines rather than a point-to-point service like highway vehicles do. 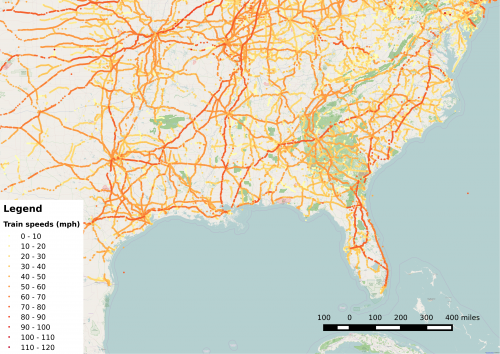 Train speeds at railroad crossings in the southeastern U.S.

A line with just two or three freights per day often only justifies enough maintenance to operate at speeds of 10 to 30 miles per hour, which is far too low for passenger services. Extra outside funding is often needed to cover the cost gap when passenger operations exist on otherwise quiet lines. That’s likely one of the reasons why Sunset Limited service hasn’t resumed: Either previous funding sources dried up, or the railroad increased the amount of money they were asking for after the hurricane and subsequent repair work.

Running more trains, whether freight or passenger, would allow the cost to be spread more widely, but that idea hasn’t gotten much traction so far. Amtrak studied the route back in 2009, but only looked at either restoring the previous tri-weekly train or two options for running a daily service (one was an extension of the City of New Orleans from Chicago, while the other was a standalone New Orleans to Orlando train).

Amtrak’s underwhelming conclusion? Restore the train as it had been before, despite its infrequent service and all the delays and complication involved in running a train all the way from coast to coast.

Studies like that are asking the wrong question and getting the wrong answer. What the country really needs is for Amtrak to add frequent, speedy service so that their trains can be used as day-to-day transportation for many more people. That would broaden the benefits that the company provides, and hopefully reduce their operating losses as well.

Here are populations for some of the metropolitan areas from New Orleans on east to Orlando:

It’s about 620 miles from New Orleans to Jacksonville, the longest gap between 1-million-plus metros on the corridor. That’s considerably longer than the 400-mile rule of thumb used in rail planning, though there are a lot of people questioning whether that’s a valid rule.

Still, there are a few shorter segments that look good on paper. Here in Minnesota, we’ve been looking at adding eight daily round-trips on the 150-mile Northern Lights Express corridor from Minneapolis to Duluth. The Twin Cities has a population up to 3.5 or 3.8 million, and the Duluth area has a population around 280,000.

Having multiple daily trips on the eastern and western segments would probably improve the viability of the middle section of the line, the most likely source of trouble today. The service improvements might even justify a new, more direct rail alignment between Mobile and Pensacola.

Similarly, if we look to cities west of New Orleans, there are some interesting combinations possible if the line started in Texas:

Houston to New Orleans is about 363 miles, which makes puts it in that ideal distance zone for frequent, high-speed service. Houston is also a notable destination because the Texas Central high-speed rail service is being planned to connect that city to the Dallas-Fort Worth metroplex. Frustratingly, a segment of track between Lafayette and Baton Rouge has been abandoned, so it would take some significant investment to link that city, but it would be worthwhile in the long run.

Amtrak’s trouble with restoring the Sunset Limited or pursuing even better options shares the same symptoms the company has all across the country. They’ve lacked the funding and motivation to pursue service improvements in areas that would bring the biggest bang for the buck while also adding to the system’s overall connectivity. Amtrak needs better funding to pursue these opportunities, otherwise we’ll look back in a couple of decades and still find a skeletal national network that hardly looks different from what we have today.