Via Historyapolis, here’s one of the most important Minneapolis maps you’ll ever see, a section of the original Home Owners Loan Corporation (HOLC) map of Minneapolis from the 1930s.

Detailed segment of 1930s HOLC “risk” maps showing Minneapolis’ near north side. The areas shaded red were deemed too hazardous for federally-back loans; most of the city’s African Americans lived in these areas.

This is from  the great Historyapolis post, which talks about attempts to change the racially-segregated housing structure:

The system demanded that realtors serve as the border patrol, monitoring the lines that divided neighborhoods by race. A professional code of ethics actually prohibited anyone associated with the national association of realtors from selling houses in white neighborhoods to people deemed not white (a broad swath of humanity that covered persons of “Chinese, Japanese, Moorish, Turkish, Negro , Mongolian or African blood”).

When [Japanese-American veteran, Jon] Matsuo’s story became public, most realtors saw no reason to relax their vigilance. The protesters associated with the American Veterans’ Committee, according to real estate developer Gillespie, were “a bunch of trouble-making, flag-waving communists.” The actions of one firm, he asserted, could not change the situation. The protesters “will have to go to the real estate board, savings and loan associations, bankers associations and get an amendment in the federal constitution if they hope to abolish use of the restrictive covenants.”

The little-understood story about how race and real estate intertwined in the 20th century is a huge factor in explaining  the persistent racial inequalities that continue to plague the Twin Cities.

Here’s a link to the full Minneapolis HOLC map! [Click to Minnesota/Minneapolis.] 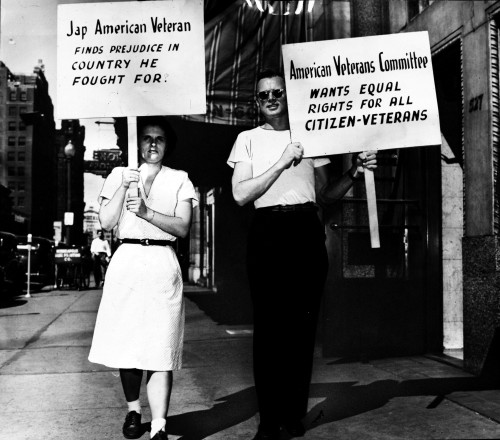 Protest over a Northeast Minneapolis restrictive covenant in 1946.