Advocates for fair housing policies received a boost recently, thanks to a UCLA study which demonstrates a link between restrictive land use policies and income segregation within cities. Instead of focusing on the issue of “concentration of poverty,” the study identifies the primary problem as a geographic concentration of affluence brought about by overly restrictive, exclusionary housing regulations.

We find that particular types of regulation, such as density restrictions, more independent reviews for project approval and zoning changes, and a greater level of involvement by local government and citizenry in the permitting process, are significantly associated with segregation overall and of the affluent.

Strategies for combatting this problem include:

1) Density restrictions exacerbate segregation, and we recommend that cities relax them strategically.

2) We also urge a more extensive implementation of inclusionary housing in the wealthier areas of cities. Such policies have a much greater potential to reduce segregation than the alternative approach of incentivizing affluent households to move into lower income parts of the city.

Regarding the second point, a more inclusionary housing policy is scheduled to be addressed by the Minneapolis City Council in 2016, at the prompting of council member Lisa Bender. This policy might allow the city to require developers to set more affordable rents for a portion of a new building’s units.

But the first point about relaxing density restrictions is likely to be a more contentious issue, at least for some neighborhood organizations. Neighborhood boards in more desirable areas of the city have traditionally opposed new higher density developments. Some neighborhood associations such as the Lowry Hill East Neighborhood Association (LHENA) were even founded for the very purpose of stopping new developments. LHENA’s first-ever President, Dennis Tuthill, stated, “We finally stopped the developers by buying homes to prevent their destruction. The LHENA Board convinced the City to down-zone the Wedge from R-6 to R-2B, and saved the rest of the neighborhood.” 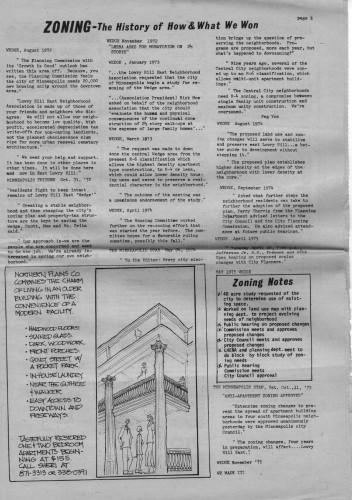 While the neighborhood may have been “saved” from the advances of developers, the long-term result of this action has been an increase in the cost of rent in this and other Minneapolis neighborhoods. Due to the difficulty of development in popular areas like Lowry Hill East, Minneapolis currently has one of the tightest rental markets in the nation, and average rent for a 1-bedroom apartment has soared above $1000. This has been the legacy of LHENA’s success, felt almost exclusively by renters in the years since.

More recently, the goal of historic preservation has been abandoned in order to justify opposition to development. In 2014, LHENA opposed a development on a parking lot at the intersection of Franklin and Lyndale, which are two major traffic corridors. Last year the Whittier Alliance, whose board consists of zero renters in a neighborhood where 83 percent of residents rent, opposed a 5-story apartment building proposed for a long-vacant superfund site at 26th and Stevens. (previous coverage of neighborhood organizations)

So it is unsurprising, yet unfortunate, that recently the CARAG neighborhood association voted to reject the developer’s need for the variance and re-zoning required to build a six-story hotel on a nearly-empty corner of Lake and Emerson. This location is in the heart of two thriving economic areas (Uptown and Lyn-Lake), and is along a heavily-used transit corridor, making this project seem like a slam dunk. A hotel would add new customers for existing businesses, provide local jobs, and remove another empty parking lot on Lake Street in the process. 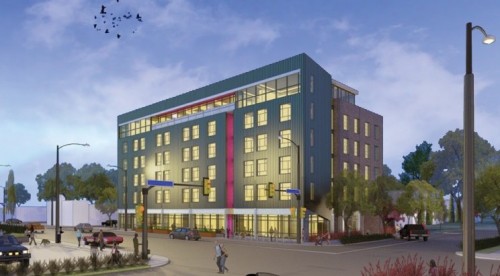 If this is built, will local Airbnb income plummet?

The CARAG residents who object to this development point to the Small Area Plan (SAP) as the basis for their opposition to the hotel. SAPs are often cited by neighborhood groups who oppose development, as they provide a degree of city-backed legitimacy because they are signed off on by Minneapolis’ Department of Community Planning and Economic Development (CPED). According to the SAP for this area, larger buildings should only be on the north side of Lake Street, not the south side (this alleviates a potential inferiority complex for the single-family homes on the south side). SAPs are just one example of how micro-level oversight by a very small group of residents can lead to negative outcomes for an entire city.

Minneapolis has been dealing with local neighborhood groups attempting to halt increasing density for several decades, and to many who follow urban issues the recent study outlining the negative outcomes that follow these organizations comes as no surprise. These groups are so opposed to new development that they will go out of their way to vote on projects outside of the area they represent.

Tie vote (5-5) at LHENA board meeting regarding opposition to Uptown hotel. Prez Leslie Foreman breaks tie making it 6-5 against hotel.

One key finding from the study puts it more bluntly:

Of course, neighborhood groups wish they had veto power over projects, but fortunately for Minneapolis, these local oversight processes carry no official weight beyond offering the city an advisory opinion. But the leadership of these groups are typically the most politically active property owners in the city, giving them an outsized voice in the process, and a stake in restricting the supply of housing that keeps their property values high.

The big difference between a neighborhood like the Wedge and parts of neighborhoods to the west like East Isles and Lowry Hill, are the number of 2.5 story walkups made possible by higher density zoning in the 60s and 70s. These buildings are criticized by some longtime homeowners, but they provide a huge chunk of the housing that makes it affordable for so many Minneapolis residents to live in a nice neighborhood like the Wedge.

In order to create a more equitable city, Minneapolis must realize that neighborhood groups in desirable areas may not have the entire city’s best interests in mind. No city would have infrastructure projects, such as light rail or an airport, if they let local opposition thwart large-scale projects. Minneapolis should stay focused on the larger picture and lay the foundation and infrastructure which will make more of our city a desirable place to live.

If you’d like to show your support for the hotel in uptown, you can do so here.

39 thoughts on “Exclusionary Land Use Regulations and Income Segregation”