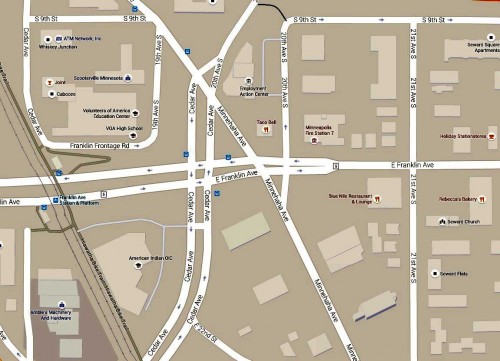 Over the past few decades, many groups have put hours into planning a more bikeable, walkable, driveable Franklin, including the intersection of Minnehaha, Franklin, and Cedar.

And because Hennepin County will be paving Franklin from 21st to 16th, and Cedar is being repaved down to 22nd, this is a golden opportunity to improve one of the most dangerous intersections in the City. The City and County have been working together to put together a design that improves the area within their budget, while also looking forward to expected developments. The expectation is that this project would be fully built next year.

The fundamental change proposed to improve the intersection is to close Minnehaha north of Franklin, which would simplify and align traffic lanes. This plan includes removing the signal at Minnehaha, and making it so you can only turn right onto and off of Franklin from Minnehaha. To relieve some of the traffic in the intersection, wayfinding signage would be added to encourage cars to use 17th. In addition, layout changes on Franklin and Cedar would make car traffic much more efficient than in its current configuration, according to the County’s traffic projections.

Another fundamental change to this intersection would be to improve medians to slow turning cars, provide pedestrian refuges, and to construct a median on Franklin to prevent left turns onto Franklin.

The green section of what is now Minnehaha north of Franklin indicates a space for pedestrians, and will no longer allow traffic through. Pink shows new medians.

What about bikes and pedestrians? 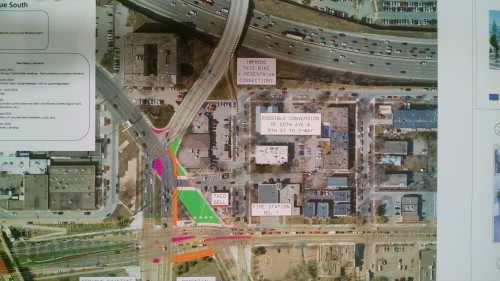 From Minnehaha, the plan would be to encourage bikes to turn left across Minnehaha on the south side of Franklin. The area between Cedar and Minnehaha would become a “multi-use trail.” From the multi-use trail you would need to cross Franklin with the signal.

To head north onto 20th Ave S
Continue on the multi-use trail on the east side of Cedar, which connects to 20th Ave S. 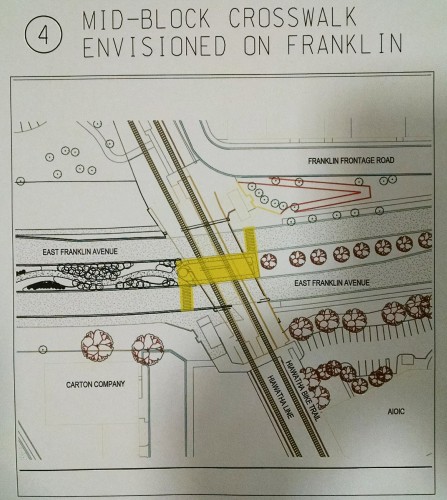 Further west on Franklin, under the LRT, an improved pedestrian crosswalk near the Anpetu Was’te cultural arts marketplace will be installed.

After Minnehaha north of Franklin is closed, that area and part of the wide Taco Bell driveway area would be turned into public space. How this space would be managed is still being worked out, but making this area into non-driveable space would tighten up lanes, slows down turns, and align traffic lanes. All of those changes would contribute to simplicity and safety for bikes, cars, and people on foot. 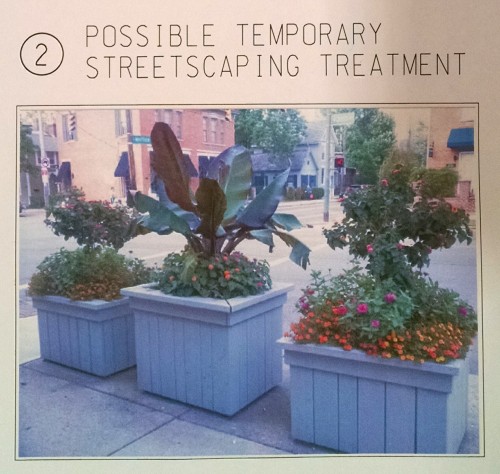 These are examples of the elements that would close Minnehaha to car traffic, north of Franklin.

There are two options being considered for the configuration of Minnehaha where it connects to eastbound Franklin.

1. One option is to take out the existing median, making the turning radius tighter (and therefore slower), and aligning Minnehaha to 20th Ave. This option seems to be the most bike and pedestrian friendly. 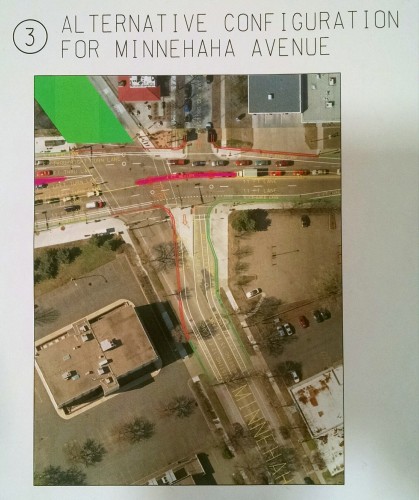 2. The second option is cheaper because it uses the existing median to separate northbound and southbound Minnehaha traffic, which has a wider turning radius which may encourage cars to gain speed as they turn. 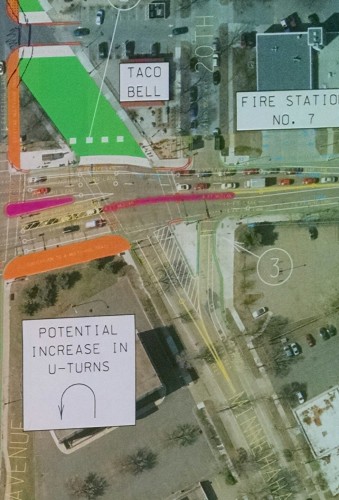 The County still needs to have further conversation with the firehouse and Taco Bell on Franklin. Conversations have been started, but there is still work to be done there.

A question remains about how bikes will safely navigate crossing Minnehaha when heading westbound, like described above. Minnehaha will have low traffic volumes, but how are we making this crossing safe for everyone?

There is also a potentially dangerous situation involving a double-threat for pedestrians crossing from Minnehaha to 20th Ave, using the small, 4-foot median on Franklin as refuge. One westbound Franklin lane becomes two at that point, creating a dangerous “double-threat” situation for pedestrians. A possible answer is to this is to push the point where Franklin’s one westbound lane becomes two further west, by only about four car lengths. This could mean a wider median for pedestrians to take refuge on, and would mean pedestrians only have to cross one lane of westbound car traffic, eliminating the double threat scenario and greatly improving pedestrian safety. The County is not planning a crosswalk here, but pedestrians will cross here and they deserve safety. 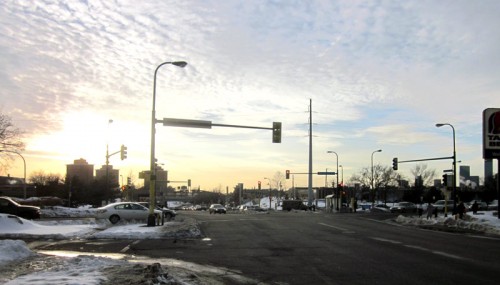 The pedestrian realm in wintertime.

Making plans with room to grow in the future

There is a realization that this intersection project has the potential to better connect bikes and pedestrians, but that scope must be limited to fit budgeted time and money. The best this process can do, short of finding more money and making the connections now, is to make sure what is being built now does not limit future connections.

There is no better time to give your input on this plan. The County will be hosting listening sessions for this project, and needs to hear about your needs as a road and sidewalk user. Supportive voices that like the overall plan (even if you have concerns!) are very important for this process!

This post originally posted on the Minneapolis Bicycle Coalition blog by Laura Kling.

25 thoughts on “Redesigning the Franklin/Cedar/Minnehaha Intersection”