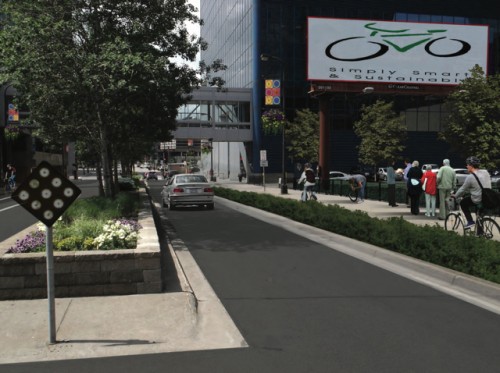 The City proposal would look like this between 8th and 9th Street and also between 10th and 11th Street. Image from Third Avenue Redesign Streetscape Opportunity: http://bit.ly/1QSQMQa

Minneapolis has the opportunity to transform Third Avenue downtown into a landmark street. The proposed redesign would offer environmental and aesthetic benefits through adding 10 percent more green space in the form of landscaped medians and planters, improve safety for all users by removing a lane of traffic and feature the first planter-protected bike lane in Minneapolis. Mayor Hodges has budgeted $3 Million to build the project this year. Recently, however, some businesses on the south end of the street have raised concerns about the delay going from four to three lanes will cause vehicles.

The delay cited would be an average of 12.8 seconds during rush hour, which would still allow traffic to flow more quickly than on most other downtown streets, according to a traffic operations analysis requested by Minneapolis Public Works. 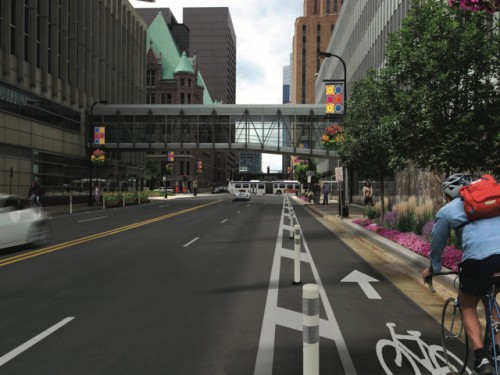 Adjusting the proposal to include another traffic lane at the expense of the street-area greening would look something like this. Image from Third Avenue Redesign Streetscape Opportunity: http://bit.ly/1QSQMQa

Those who object to the proposal are calling for removing the proposed green medians and building a bike lane protected by white plastic delineators – like those that used on 26th and 28th – in order to retain four lanes for vehicles. Public Works engineers have actually determined that four lanes are not needed south of 8th Street. Retaining those lanes would leave a four-lane undivided street. According to the Federal Highway Administration, these types of streets have 19 to 47 percent more crashes than three lane streets with left-turn lanes, the proposed design.

Change is difficult, especially when the proposal includes a new type of bike facility to be built in the heart of our city where we all have a stake. Of course, the proposed redesign of Third Avenue would benefit people on bikes by offering a safe and pleasant and much needed north-south route through downtown, but the redesign offers much more than a bike facility. The green medians and removal of the unnecessary travel lane make this proposal one that could benefit the entire community. Here are a few ways different members of our community might benefit from the redesign of Third.

Property owners on 3rd would find themselves on a landmark street in our downtown. A street that is not only attractive but easy to find and navigate. Consider what this means for the Convention Center and hotels whose businesses dependent on out-of-town visitors. It has already been shown that Twin Cities homes increase in proximity to off-street bike facilities. The experience of other cities shows bike and walking facilities can also increase the value of commercial property.

Right now, Third Avenue is a street many people have to visit because it’s the location of the Minneapolis Convention Center, Minneapolis City Hall, Hennepin County Government Center, the Federal Courthouse, many businesses and corporations, housing and hotels. Improving the street could make it a place that people want to visit. Parking a car downtown requires time and money. In comparison, parking a bike or pausing on a walk, takes little time and no money. Retail sales increased 49 percent after protected bike lanes were installed on 9th Avenue in New York City.

Green suburban campuses and golf courses used to be the types of amenities corporations used to attract talent. Who needs those kinds of amenities when it’s possible to be in the center of downtown, with all the access that implies, and employees still have the option to eat lunch next to a flowerbed? A survey of Portland transplants found 62 percent cited bike-friendliness as a factor influencing their decision to move. Further, an environment that invites people to walk, run or bike is going to improve health. The experience of Minnesota company QBP is that healthy employees save money on health insurance and miss fewer days of work.

General Public: Safer mobility for all

The government centers along the street make Third Avenue an important street for all people. Whether applying for a license or attending a public meeting, we all have occasional business with local government. Not everyone has access to a car just like not everyone who rides a bike does so because they love riding. Low-income people and invisible cyclists still have a right to move about safely. It is especially important that this street be accessible and safe to people traveling via low-cost modes. Removing the unnecessary travel lane is especially important to improving pedestrian safety.

Unpredictable cycling often happens in places where there is not sufficient biking infrastructure. A 2014 study looked at perceptions of new protected bike lanes and found that 83 percent of people who primarily commute by car agreed that protected bike lanes made it clear where cars were supposed to be and where designated bike lanes are. The planter-protected bike lane has the potential to help drivers anticipate how cyclists will move and make it safer and less stressful to share Third Avenue. 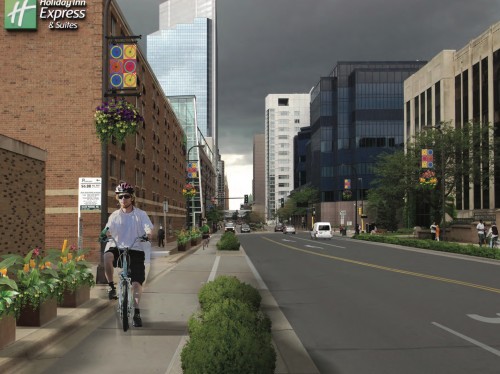 This is how Third Avenue is proposed to be redesigned at 12th toward 11th. Image from Third Avenue Redesign Streetscape Opportunity: http://bit.ly/1QSQMQa

When Lyndale Avenue was narrowed from four lanes to three south of Lake Street, there were similar concerns to those being expressed today. Many feared traffic would become impossibly congested but that turned out not to be the case. Traffic still flows, there is additional green on the street and safety has been improved. The easier we make it to drive, the more people drive. The more we acknowledge the true cost of driving – in terms of the air pollution, individual health, economics of maintaining a vast road network, space required in our city – the better decisions we can make when distributing our transportation resources and the better decisions we can make as individuals who have places to go. We need a transportation system that encourages choosing the best mode for each trip. Prioritizing biking, walking and transit in the densest part of our city, downtown, doesn’t mean people will not be able to travel or even travel by car but maybe it’s okay to let drivers feel the cost of the decision a little bit more than we have in the past. The resources that made mass car use possible are finite.

12.8 seconds of delay that some drivers may experience is not such an unjust burden that it should derail the greater community gains if Third Avenue were redesigned. If you agree, please show your support today by signing this petition asking the City Council to support making Third friendly to people on bikes and on foot.