Here’s a grim chart from the Star Tribune’s data desk showing the 2016 rising trend in pedestrian deaths from crashes.

The chart below looks at death counts for the past ten years adjusted for the first nine months of the year: 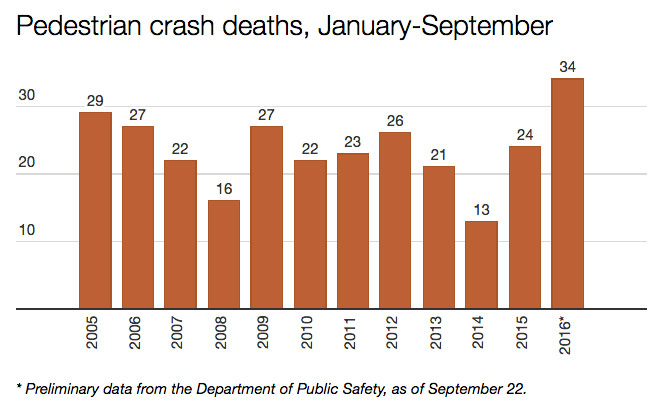 You should read through the article. The author, Eric Roper, interviews a public safety expert who points to the rise in distracted driving (e.g. cell phones) as a prime cause of the dangerous escalation.

[Donna] Berger [a director at the Department of Public Safety] said that crashes related to distracted driving, based on anecdotal evidence, are rising.

“I’m very concerned with what I’m seeing these days with things like the Pokemon, and the cell phones, and just the technology that’s built in the car,” she said.

She said the fact that trendlines in the bicycle and pedestrian data aren’t dropping is a worrying trend in itself.

“We aren’t making progress in changing people’s behavior,” Berger said. “Our point is we want to move toward zero deaths. One death is too many. No one should get that knock on the door.”

What’s especially troubling is that pedestrian deaths typically spike after daylight savings time kicks in — especially on Halloween — when it gets dark during the p.m. rush hour.

Without a robot-car deus ex machina, distracted driving is a problem that will only escalate as cars incorporate more and more technology into their dashboards. All the more reason to focus more on reducing speeds (and therefore crash impacts) especially in walkable areas. Without looking more closely at the geographic sites of these crashes it’s hard to be more specific about design solutions to this problem, but reducing speeds can only help.

The article also breaks down injuries by in- and out-state trends. 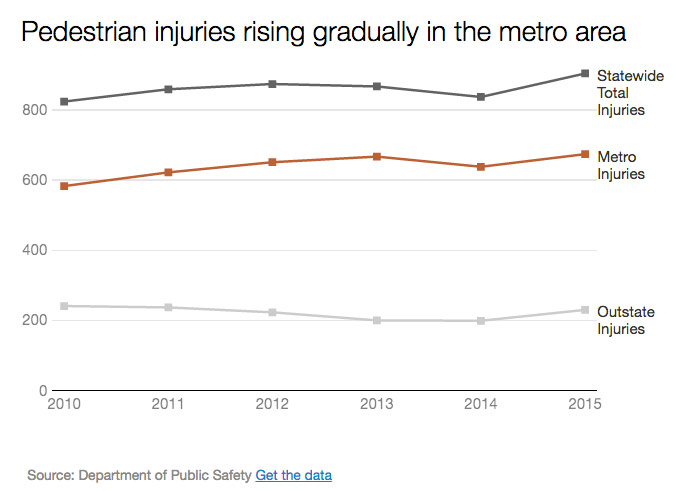 8 thoughts on “Chart of the Day: Projected Statewide Pedestrian Fatalities”