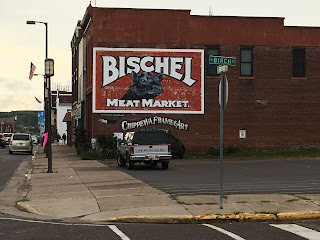 I had occasion to act like a real American this week and spend several hours driving a car (on World Car Free Day no less) and visit Real ‘Merica (heck yeah!) in Chippewa Falls, Wisconsin (how’s that for foreign, you guys? Would you like more parentheticals?).

One thing I love about visiting a new city is the opportunity to learn something, however small, about its history. Walking down Bridge Street in Chippewa Falls, you can see the boom that happened there around the turn of the 20th century. You can also see that lack of subsequent demand that’s left those buildings in place, but a bit underused.

Which brings me to the sign above which, as you can see, is nearly at the corner of Birch and Bridge streets (but for the convenient parking lot). At first I thought maybe it wasn’t a “ghost” because, well, it’s pretty darn clear, and there could still be a meat market there. But there isn’t and I assumed that this one was touched up at some point as a bit of public art. There’s a nearly identical, but far more faded, version on the other side of the building. Turns out, the one in our picture was recreated in 2002.

There’s a date stone on the front of the building, up near the top, that says “L. Bischel” and “1907.” So it seems like a safe bet that the building was built in 1907 by a Bischel with the first initial “L” (Linus? Lionel? Leopold? Ludwig? Lucious? Lamont? Lucifer?).

Okay, it’s actually Lorenz and it seems he moved to Chippewa Falls from Germany in 1863 and this building was actually the second location of his meat market on Bridge Street.

The power of Google informs us that that there were Brothers Bischel who were partners in a meat market here. They went their separate ways as reported in The National Provisioner on February 2, 1918, with John Bischel continuing in the business. I would have to guess that these brothers are Lorenz’s sons.

The Wisconsin Historical Society has some older photos, perhaps from 1984, when the building housed Grothes Inc. electrical contracting. Today it houses Chippewa Falls Main Street, which seems to be an organization that tries to strengthen downtown Chippewa Falls. They also had a hand in getting this sign repainted, so they seem like they could be my kind of people.

Having spent almost very nearly an entire hour there, I can now proudly claim to be the world’s foremost expert on Chippewa Falls, therefore, please stand by for my erudite critique of its urban planning. Okay, so I’m not qualified for that in any way shape or form, but I’m going to offer some thoughts anyway. There were some nice banners along the streets (I’d bet the Main Street people had a hand in that) that said “bike,” among other things, but I didn’t see anyone on a bike. In fact, I think the only bikes I saw were on display in the sporting goods store. Someone had taken the time to paint “No Bikes” on a sidewalk though, so maybe I just missed the typical bike volume.

Nor did I see a bike facility of any type, leaving me wondering where the banner-hangers wanted people to ride. Granted, even though it was a weekday, the traffic volume wasn’t so bad. I probably would have been willing to bike around downtown Chippewa Falls, but then again, I’m someone who bikes kind of a lot. A less confident rider might find the Bay Street and Rushman Drive/High Street one-ways a bit daunting. They sure seemed like they’d be more pleasant as two-ways.

Meanwhile, directly across Bridge Street from Bischel’s, there’s a newish-looking Holiday, complete with giant parking lot and car wash, not unlike the one proposed for Northeast Minneapolis. Essentially in the middle of downtown. Just down the street from another gas station. And a few blocks across town from the large grocery store whose parking lot breaks the street grid. So, yeah, none of that is what an urbanist would suggest you do to make a vibrant downtown.

But I don’t want to be too pessimistic. There were several cool things going on downtown too. The Korger’s decorating store at Bridge and Central abuts the sidewalk on both sides, has street-level windows and, to my unprofessional eye, speaks nicely to the historic buildings of downtown, even though it was built in 2003. The Shoe Factory Apartments look like an cool adaptive re-use, that apparently hadn’t happened yet when the Google Streetview last went by.  I think this surface parking lot is now a hotel. They’ve also got a nice, newish roundabout at the bottom of Bridge Street. And, of course, I’m jealous of all of Wisconsin having 25 mph speed limits in town.

Anyway, I’m rambling toward a missing conclusion here, but perhaps the bottom line is that Chippewa Falls is totally worth an almost hour of your time. And probably more.

Cross-posted from Ghost Signs of Minneapolis