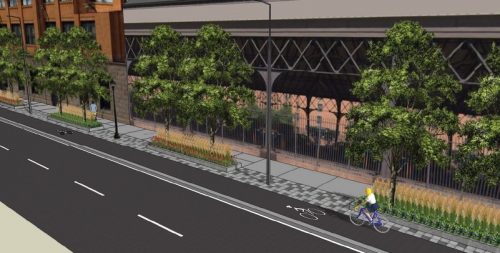 A rendering of Washington Ave between Hennepin and 5th St.

When Hennepin County opens the new stretch of Washington Avenue between Hennepin Avenue and 5th Street in 2017, it will debut a safe and accessible environment for pedestrians and bike riders alike in Minneapolis. However, the infrastructure will be largely stranded. Along Washington between 5th Street and I-35W, the County plans to install unprotected bike lanes, reduce the number of travel lanes, and provide full-time parking. These changes are not enough to set our city on the right track toward a more walkable, clean, and safe city. The County is designing 11-foot lanes along the corridor, but with a reduction to 10.8 or even 10 feet, significant additional improvements could be made.

As a wide street with restricted parking during morning and evening commutes, Washington Avenue currently serves as a commuter street, prioritizing people in cars entering and then leaving the city as quickly as possible. Commuter streets are not suited to serve other users well. But Washington Avenue is not only a commuter street, it is also a local street. Local streets serve a variety of users because they contain housing, businesses, offices and shops, transit options, and other activities that we enjoy. But the success of streets like these relies on the perceived safety of the street for pedestrians and other users.

Jane Jacobs writes that the safety of a street is established by the consistent rotation of eyes on the street (Life and Death of Great American Cities, 1961). These eyes pass through the space daily or weekly, based on their use of the space or the needs the space fulfills for them. As they do, they will look over the environment and provide safety in numbers. This requires shared communal compassion for the space and for fellow people. She often illustrates this as residents along the street taking care of the space in the mornings and evenings, a variety of consumers and school members watching over it during the day, and then perhaps also a third aspect that demands density long into the nights such as dining, bars, recreation, etc. 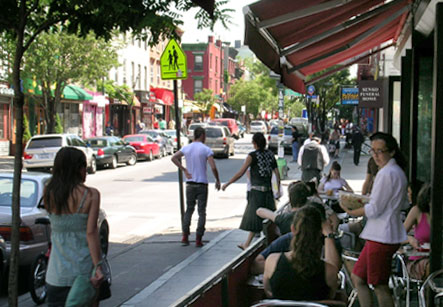 The current apartments and variety of businesses along Washington make portions of the corridor feel like an attractive local street. Planned construction of more apartments and hotels along the route, or a within a block or two away, make it clear that we need to value pedestrians more on this stretch of Washington. A Trader Joe’s will pop up at Chicago and Washington early next year. The Vikings stadium is inspiring new mixed-use buildings in the area, and a successful street will attract people walking from the stadium. However, the current design of Washington can and does turn people away.

Our local streets fail or are held back when we value cars traveling through the street too much in comparison to people on the street. Cars fight against pedestrian density with their negative externalities. They are loud; they pollute the air we breathe and thus risk our pulmonary health; and they put our lives at risk because a misuse of the space by a pedestrian, or more often, a driver, can result in death. These are just the externalities we directly experience. The infrastructure requirements for individual car ownership pollutes our rivers and gulfs. The investment to maintain these systems increases and continues, straining our City’s financial strength. Lastly, the daily green house gas emissions push us toward an uncertain future with our warming climate. Washington Avenue is suffering because it wants to pump people driving cars out of and into the city more than it would like to provide safety and joy to the people within it.

Simply by narrowing car travel lanes, we can 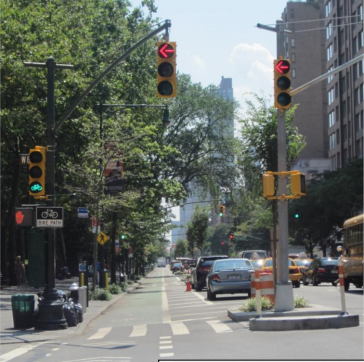 implement design considerations that would improve the attractiveness and safety of Washington Avenue. 10 or 10.8 foot drive lanes are completely navigable by any competent driver. The reduction in lane width would allow for a protected bikeway connection between the West Bank campus and downtown Minneapolis, as well as full-time parking between the protected bike lane and the moving car traffic. New protective islands could make the task of crossing the street task less daunting for pedestrians. Plants and vegetation can be planted to revitalize areas that have been lifeless for so long. The separation between the sidewalk and the car lanes would make the walking experience on Washington more enjoyable and would provide a nice walking connection to Nicollet Mall and Hennepin Avenue. The improved bike and pedestrian environments would encourage those that are willing to enter the area in a more space-efficient, safe, quiet, and clean form of transportation. The increased ease of access would benefit shop owners and residents alike as safety would increase with pedestrian density.

People in cars do not travel through space quite like people on bikes or pedestrians do. When you are walking or biking, you can almost instantly and harmlessly enter any space at any moment while traveling. Thus, you are always a part of it. The speed of the travel and the vulnerability to the environment allow bikers and pedestrians to really witness their spaces with all five senses. For me, this leads to more enjoyment and care for that space and that moment. I believe these people through our streets and spaces are another example of how to create safe environments through the rotation of eyes that look out over and care for a space, just as Jacobs describes.

Making Washington Avenue a street that works for everyone is going to take everyone. If you are interested in following this project or providing feedback, please reach out to me through this Google form. I hope to hold a meeting in the community sometime in early December where we can go into more detail about the improvements that can be made as well as answer questions and collect feedback. Safer streets are within our grasp, but we have to reach.

13 thoughts on “A Better Washington Avenue Now, Not Later”