In 1934, the Federal Housing Administration devised a classification scheme for urban residential properties as part of the Home Owners’ Loan Corporation, a New Deal program intended to refinance existing home mortgages and to make the process more accessible for new homebuyers. The HOLC system classified homes and neighborhoods into four tiers, ranging from the most desirable and likely to retain their value (shown in green) to those whose values were expected to or were already in decline (red).

Although well-intentioned, the classification system had vast unforeseen consequences for the physical and demographic makeup of cities across the country. Although the system was theoretically determined by age and housing characteristics, the system was essentially a cipher for race; minimal integration between white and black residents was enough to demote areas in the hierarchy, and areas predominantly inhabited by people of color were usually labelled “Hazardous” (red). The government refused to underwrite loans to these areas (and banks worked with them), creating neighborhoods of homes that were difficult or impossible to sell, regardless of the condition of the property. This effect, known as “redlining,” was a key factor in exacerbating residential segregation and neighborhood decline, and the Twin Cities were no exception.

The HOLC map for Minneapolis has been featured here previously, but the map for Saint Paul is only accessible (AFAIK) in low-quality photographs. Thankfully, the Metropolitan Council recently uploaded digitized redlining maps for both Saint Paul and Minneapolis, making the raw data freely available here. Using that data, I recreated a version of the map below, with the various zones laid out on the Twin Cities’ modern street grid to emphasize the effects of freeways and urban renewal. 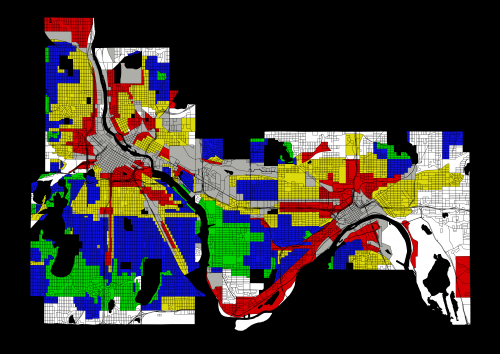 Although the zones shown here had changed by the time active urban redevelopment was attempted in the 1950s and 60s, use of the modern street grid makes obvious several features that are not apparent in the historical maps. It makes clear, for example, that the freeway interchange which pins downtown Saint Paul to the river was targeted fairly precisely to demolish the southern edge of the redlined zone, at the same time as much of its surroundings to the north were bulldozed for other purposes.

What do you see in this map? Let us know in the comments below.