Minneapolis City Council Member Blong Yang would like you to choose one or the other.

Bender spoke in her best urban planning voice to explain the geographical potential for protected bike lanes on Glenwood Ave., while Cano focused her remarks on how better bicycle lanes could minimize bicyclist safety risks. Glidden, in a self-described rare move, changed her vote from approval to opposition and challenged assumptions that the city is doing enough to make streets safe for all users.

A visual representation of what some Council Members were hoping for

Yang, who represents Ward Five, including Glenwood Avenue, had some choice words for his colleagues who spoke out against the plan during the meeting.

“If my colleagues have more free time to devote to Northside issues I’d like to draw their attention to the regional drug market operating…down Glenwood,” Yang said after conveying he was surprised by the interest his colleagues took in this plan.

“I understand that bike lanes can be the measure of success in Minneapolis but success in North Minneapolis might be a little different and nuanced. Figuring out solutions to make sure that [people] in the region don’t come in North Minneapolis to buy heroin would be welcomed,” Yang continued. “And it would be as good a use of energy as picking a fight with the county about road design.”

“These are independent things,” Casey Pavik, manager at Venture North Bike Walk & Coffee, said in reaction to Yang’s comments. “When we introduce people to biking, we are dealing with recreational riders. People still ride on the sidewalks on Glenwood even though there are bike lanes.” Although heroin dealing on Glenwood is a known issue Pavik said “it’s a separate problem.”

Pavik noted that Yang focused only on the negative issues on the Northside, and said Yang was engaging in “politics of opposition” and continuing the false narrative that the Northside is terrible.

“Let’s grow something that is positive,” Pavik said.

Venture North is a vibrant business on Glenwood Avenue and is fostering a growing bicycle constituency on the Northside. Pavik conveyed frustration that Yang wanted to focus his comments on drug dealers and not on improving the street as much as possible for bicyclists.

The Minneapolis Bicycle Coalition also supported adding protected bicycle lanes to the plan. “We do hope Hennepin County will…align with cities around the country and support safer streets” by adjusting lane width standards (which was the crux of the protected bicycle lane debate on Glenwood Avenue). “This was a missed opportunity to make a real change for our communities,” Ethan Fawley, director of the coalition, said.

Yang is not against all bicycle and pedestrian improvements in his ward. In actuality, he appeared to be fully supportive of the planned pedestrian improvements on the street.  Yang said that the “real gem” of the Glenwood Avenue plan is the commitment to the pedestrians, alluding to the planned eight-feet-wide sidewalks. Many homeless shelters and supportive services are on Glenwood Avenue and Yang said that promoting pedestrian space in this area is promoting a “safe space for people” who are usually kept on the margins of society. Pedestrians are “doubly important” and with the goal of increasing connections to the farmers market, “we need to ensure foot traffic is promoted and safe,” Yang said. 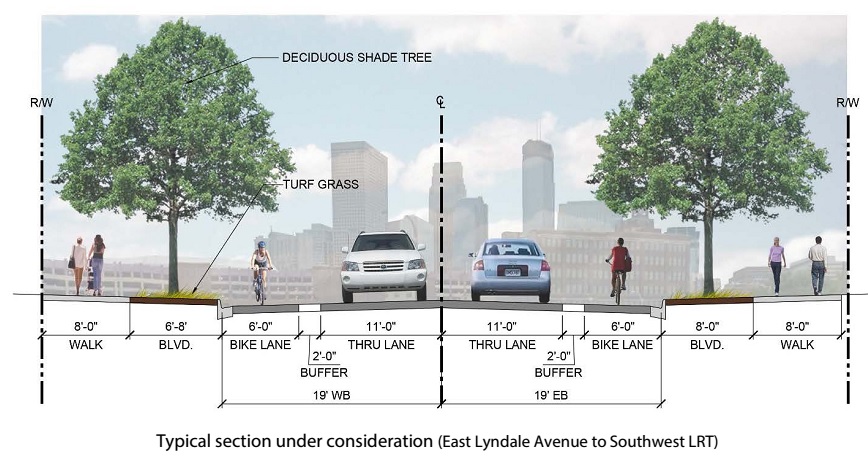 A visual representation of what the city council approved

The discussion about the Glenwood Ave. plan starts at 15:30 with Lisa Bender speaking.