Editor’s Note: Max Hailperin is walking each of Minneapolis’ 87 neighborhoods, in alphabetical order. He chronicles his adventures at  allofminneapolis.com and we’re sharing them here at streets.mn, at a pace of one or two walks per week.

On my previous day in the Bancroft neighborhood, I had walked everything to the west of 14th Avenue South as well as two of the four blocks on that avenue. Therefore, my route for the eastern half of the neighborhood included the two blocks that I had previously skipped:

I again chose to keep my bus connections simple by using the number 23 bus to start and end at a single stop, in this case the corner of 38th and Cedar.

Compared with the western half of the neighborhood, I saw a somewhat more diverse assortment of housing. To take one clear example, the entire block between 14th and 15th Avenues and 40th and 41st Streets is occupied by the Bush Terrace Condominiums, a cluster of 8 18-unit buildings dating from 1965: 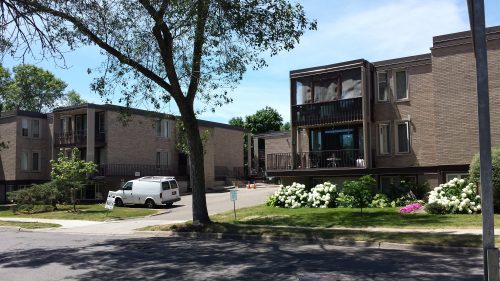 Kitty-corner from the condominiums, in the block bounded by 15th and Bloomington Avenues and 41st and 42nd Streets, I came across an interesting park-like facility. My first clue that it wasn’t a normal park was this bench and path outside the fence at the northwest corner of the block: 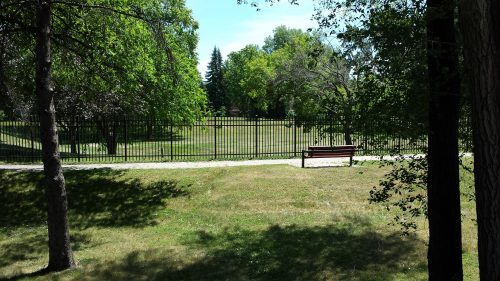 This connects with the bulk of the block being encircled by the fence, with only two easily blocked off entrances at the middle of the western and eastern sides: 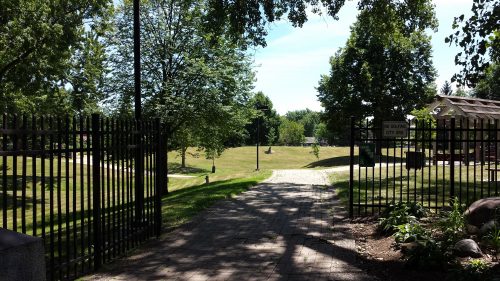 Once inside, there are some recessed grassy areas that look inviting for recreation, 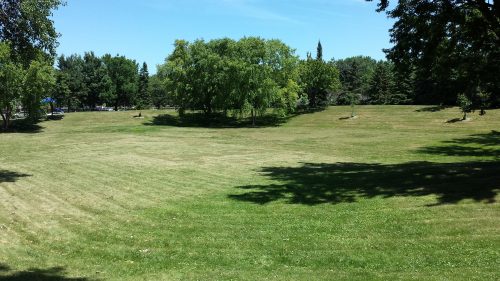 and up on the high ground by the fence, a nice picnic area: 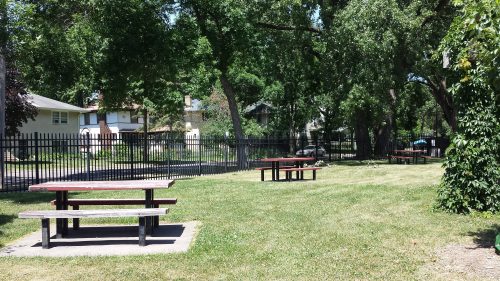 The name of this slightly odd park-like facility is revealed by a sign on Bloomington: 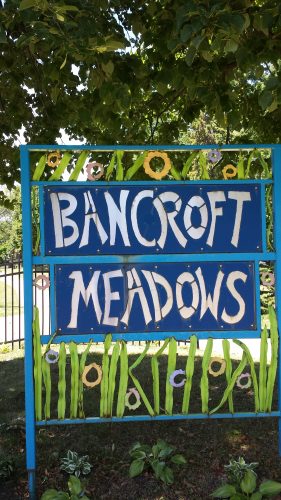 Bancroft Meadows is not owned by the parks department, but rather by the city’s public works, and its primary function is storm-water detention, having been built for that purpose in 1989. The fence is presumably to minimize the hazard when the basins fill. Happily, in drier times it is available for recreational use, and the corner areas (such as that first bench) are available even more broadly.

Across Bloomington Avenue from the Meadows is the colorful building of El Colegio, a bi-lingual Spanish/English charter high school housed in what used to be a grocery store built in 1955: 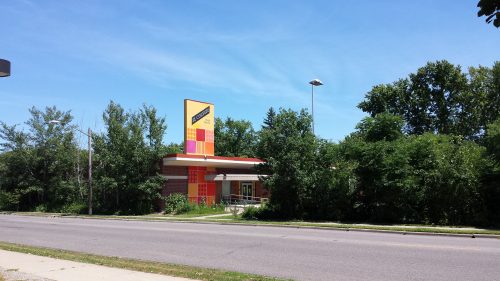 One block further north on Bloomington Avenue, on the western side of the 4000 block, there is a strip mall that currently houses child and adult care facilities, a dollar store, a laundry, and a tanning business. Separate buildings house Jardin, a Spanish immersion program for infants, toddlers, and preschoolers, as well as an auto repair business.

Once I finished with the rather commercial Bloomington Avenue and headed back south on 16th Avenue, I was back in solidly residential territory. There were plenty of interesting houses, but I’ll content myself with number 4044, which stood out for its paint job. I always admire houses with strong contrasts that pop out, but the courageous, even cheeky attitude is taken to another level when it is coupled with asymmetry: 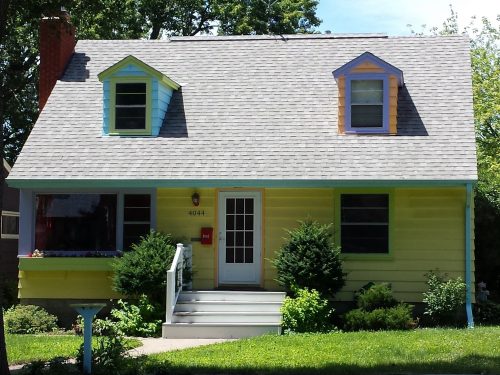 Continuing south on 16th Avenue, I encountered Bethel Evangelical Lutheran Church in the 4100 block, as well as on 17th Avenue once I wrapped around the property. They clearly have done a great deal to integrate themselves with their community. Even leaving aside the children I saw being engaged in organized activities as I passed, I saw several more persistent features. First, there was a community garden: 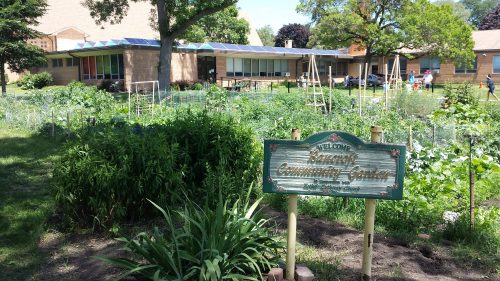 Then, there were signs indicating that they had shared their space with a Spanish-language pentecostal congregation: 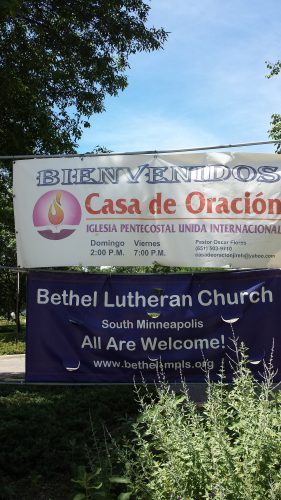 And, finally, there was the “Bethel Community Labyrinth,” with signs welcoming all to use it as they choose: 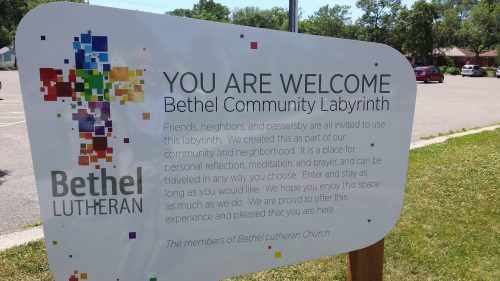 “You are Welcome … in Any Way You Choose” 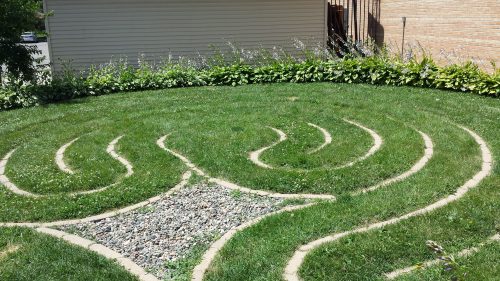 Continuing north on 17th Avenue, my eye was caught by a house that didn’t match the style of the others. The city database show 3939 17th Avenue South as having been built in 1910, but can this modernist design really date from that early in the 20th century? Perhaps the style was radically altered during a later rebuild that left just enough intact to not update the database? 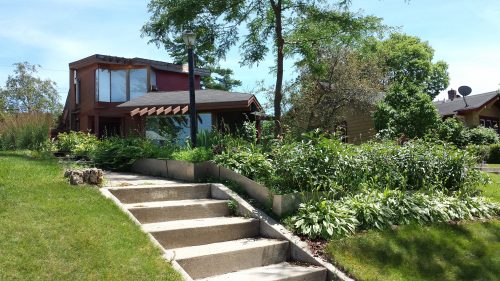 In western Audubon Park, I had encountered a “Poetry Box” where one was encouraged to take and leave poetry, whether by the poem or the full book. That came to mind as I spotted a poetry book alluringly displayed on the corner of 17th Avenue and 39th Street. Did whoever left it there intend for some stranger to pick it up? 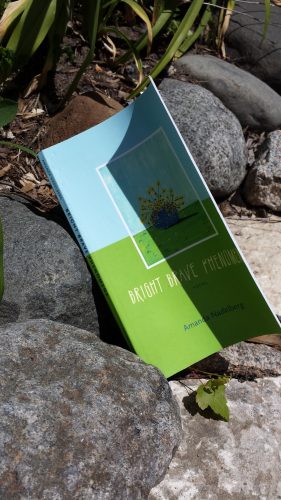 One of the recurrent themes I noticed in the Bancroft neighborhood was painted garage doors (as well as interestingly painted garage sides). In the western half, I had noted a bold zig-zag. Here in the eastern half, I noted several more, starting with a tree on the 1700 block of 42nd Street that reminded me of graffiti art, 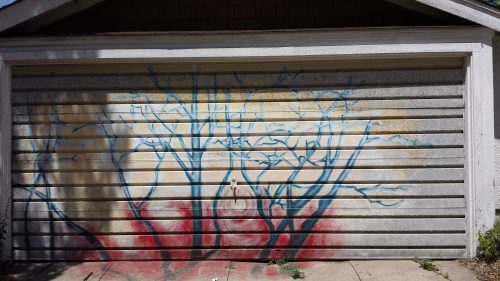 The next garage door I noticed was more subtle. The door itself wasn’t painted, but the lights (windows) in the top panel were backed by interestingly arrayed pastel colors. (The shadow of a basketball net also added to the interest, given my atypical mid-day walk.) 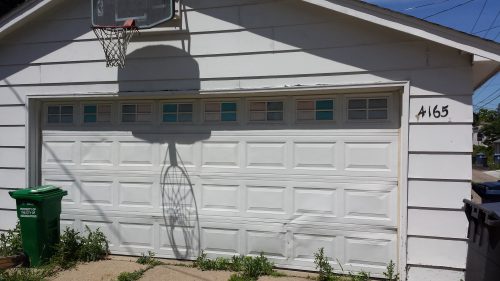 Taking a break from garage doors, as I prepared to round the corner from 42nd onto Cedar, I noted a particular large mural on the side of the building. (I’d been noticing many murals, typically with the “signature” of El Colegio, as this one had.) I couldn’t get a good picture of the whole mural, but here’s a detail: 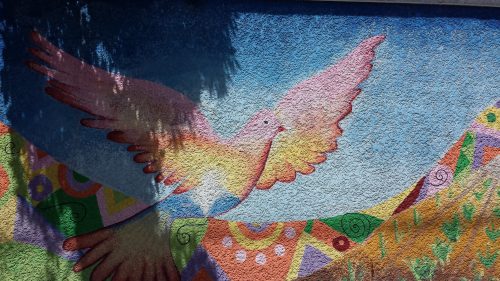 Detail from the Mural on 4164 Cedar Avenue South

Once I around onto Cedar Avenue, I was able to see that this building houses courageous heArts, a very interesting looking drop-in studio for 10 to 18 year olds, “especially reluctant or marginalized artists” that strives to work together with the youth “with the intention to heal and empower — through expressive arts, community building, and leadership.”

Only the west side of Cedar Avenue is in the Bancroft neighborhood, but even that one side houses a diversity of commercial establishments (as well as residences). Indeed, even on the 4100 block, I made another interesting discovery at Ken Friberg Photography and Studio. I initially stopped to photograph the free double oven displayed in the window: 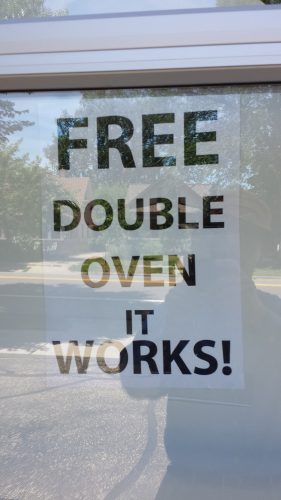 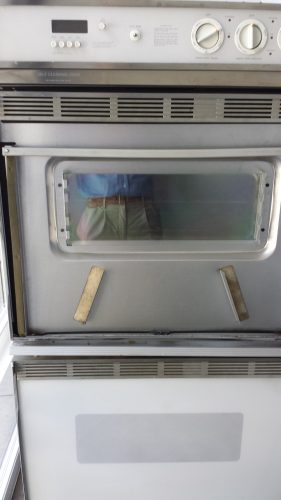 However, as I was snapping my pictures, the door opened and Ken Friberg himself graciously invited me in to what turns out to be a very capacious (and capable, I gather) commercial photography studio. Despite my disclaimer of any serious interest, he treated me with courtesy and kindness. If you know anyone in the market for commercial photography or a free double oven, I would suggest you check it out.

At this point my route map called for me to go back to traversing the east-west numbered streets, specifically 41st and 40th. As I neared Bloomington Avenue on 41st, I caught sight of a painted garage that had a message particularly meaningful to me: “Justice for all / Justicia para todos.” (Other garages I spotted were colorful but harder for me to relate to. I’m just not a Harley Davidson guy, for example.) 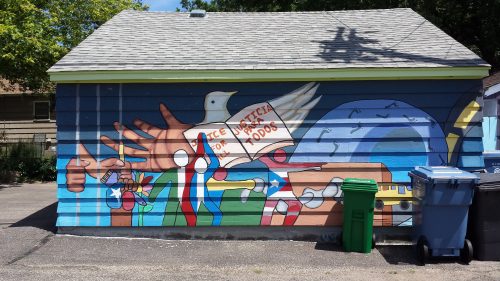 Justice for All / Justicia Para Todos

By shifting attention to garage sides, I don’t want to imply that I was done with painted garage doors. Not at all. For example, on 40th near Bloomington, I had that tingling feeling of being watched: 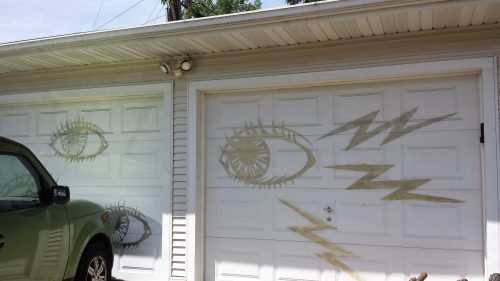 The Electric Garage Door Opener Makes it Roll its Eyes

Once I had taken 40th Street back to Cedar Avenue, I just needed to finish up the last couple blocks of Cedar to return to my starting point at 38th. Before I was done, though, I encountered what is likely the most attractive commercial establishment in the whole neighborhood, Acanthus Floral Art: 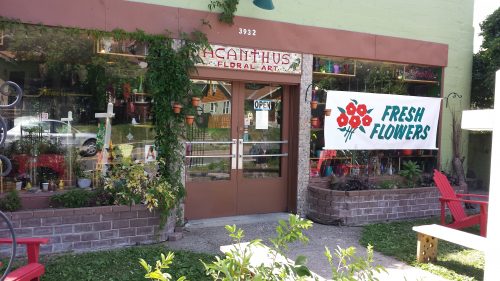 Stepping inside, I was immediately given a warm greeting that served as a good introduction to the mixture of helpfulness and good cheer that marked my entire time in the store. When I say helpfulness, I don’t mean to imply the breathing-down-your-neck-with-no-time-to-browse kind of overly-helpful attention. Instead, I experienced just the perfect balance between service and space.

As you might imagine from the signage, the store offers some attractive cut flowers. Because I still had a couple blocks to walk and then two buses to take, I opted to look instead at the other gift items. This proved to be a smart choice as I was able to pick out two very nice “quilled” cards made by The Creative Quill Shop, which made my Less Pedestrian Half very happy when I presented them upon my return home. In case you don’t know what “quilling” entails (as I didn’t), this is the craft of making designs with rolled up strips of paper.

Three neighborhoods into my project, I’ve definitely reinforced my belief that each neighborhood is a grab-bag of experiences, some expected and others not. Acanthus was on Google Maps, but the garages weren’t. There’s no substitute for going out, walking the blocks, and seeing what there is to see. I’m looking forward to Beltrami!

This article was published July 1, 2016, on the author’s All of Minneapolis blog. The original version is available there.