Everyone needs to pee. This is an observation so obvious that it shouldn’t need to be stated. Yet it seems it’s not an observation that has made its way into our urban planning.

Much of the world understands this. If you arrive in a town in the UK of about any size, you’ll find not only public accommodations, but signs around town directing you to where to find them. Sure, in Little Quaintown on Upper Lower Trent, this is largely for tourists, especially the rude American kind that would barge into the nearest establishment and pee without paying, but still. If you look around our fair city, you’ll notice signs saying, “bathrooms for customers only” that are a pretty good sign our local businesses aren’t terribly excited to welcome the public in to pee either.

The Minneapolis Downtown Improvement District has identified public urination as an issue and put an experimental free lavatory in Peavey Plaza in Fall 2015. Since that time, portable toilets open the public have been added to The Commons.

The fact of the matter is there are just very few places to pee that are open to the public in downtown Minneapolis, especially during evenings and weekends. What’s currently available falls into a few general categories:

Private businesses that are mostly open to all: Target. Barnes & Noble. Whole Foods. Macy’s before it closed.

Private businesses or institutions that are sort of open, but might not be for the disadvantaged: hotels, restaurants, St. Thomas campus.

Public buildings that are open during the day: library, City Hall, various other city and county buildings.

Private buildings if you know where to look: U.S. Bank Plaza (although I’m there every week day and didn’t know about them), TriTech Office Center skyway level.

Local blogger Nick Magrino has some good ideas for where additional restrooms could be added. Personally, I really like this idea from streets.mn contributor Alex Cecchini: 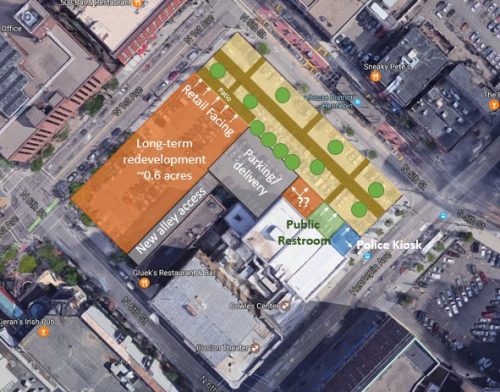 The Cecchini Concept for 5th and Hennepin

I like the rest of it to address downtown public safety complaints too, but for the sake of this discussion, the idea of adding a public restroom adjacent to a light rail stop amidst quite a few nightlife venues seems like a no brainer. People complain about this intersection, including public urination, so let’s take that activity off the street.

In addition to adding new public restrooms, it would help to make existing restrooms more public. The Leamington Ramp transit center, for example, has restrooms that are technically open to the public: 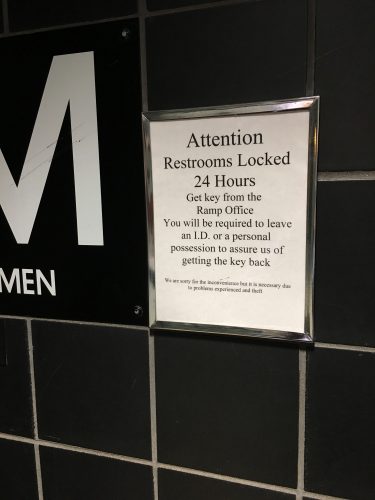 There have been issues, people.

I’m sympathetic to the security and maintenance issues, but are we pushing the marginal urinator out into the street with these restrictions? Maybe tolerating those issues is worth it (or we can find other ways to prevent them)?

Meanwhile, on the other side of downtown, I found this ostensibly public restroom in the 394 bus lobby of the B Ramp, very much closed (mid-day): 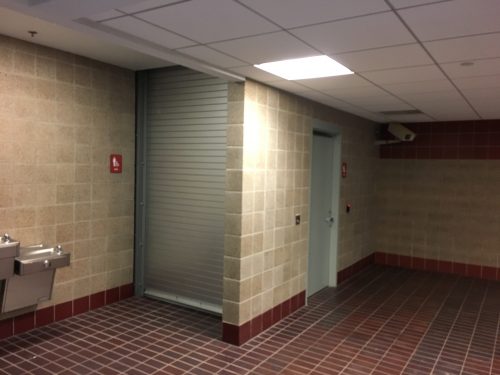 Let’s add more public restrooms downtown, but also, and in the meantime, can we make existing restrooms more available?