The Cleveland neighborhood within north Minneapolis’s Camden community has Penn and Xerxes Avenues as its eastern and western boundaries and Lowry and Dowling Avenues (which take the place of 32nd and 38th Avenues) as its southern and northern boundaries. However, today I only walked the southern half, going as far north as 35th Avenue.

In the following route map, the main loop from A to B is marked in blue, while the red lines indicate spurs off of the main loop, which I walked forward and back again. The main loop is indeed a loop: the map is missing the final connection along a sidewalk leading from point B (on Lowry) back to point A (on Washburn).

Of the neighborhood’s four boundaries, three are main thoroughfares: Lowry, Penn, and Dowling Avenues. The exception is on the western boundary, where the main thoroughfare, Victory Memorial Drive, lies just outside the city. Xerxes Avenue is a quiet residential street much like the rest of the neighborhood except that the broad, tree-lined, grassy (or snow-covered) boulevard of Victory Memorial Drive is visible adjacent to it. 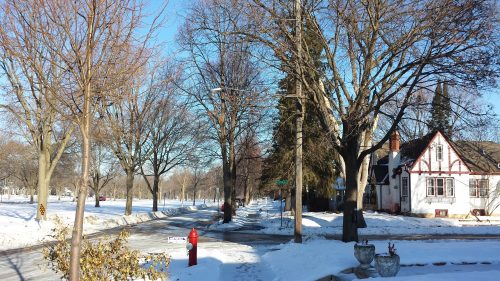 Aside from the commercial properties on Penn and Lowry Avenues, nearly all I saw were single-family detached houses from the 20th century. Most seemed to be from the 1940s through 1960s, though there were certainly outliers, such as the 1929 half-timbered house in the preceding photo.

Not that residential properties are distinguished only by their buildings. For example, as I walked 34th Avenue from Xerxes to Penn, it was a fence rather than a building that drew my eye to the property on the southwest corner with Upton. Among the fence’s features is an oversized Adirondack chair set into a peaked pergola at the corner, facing outward toward the sidewalks. 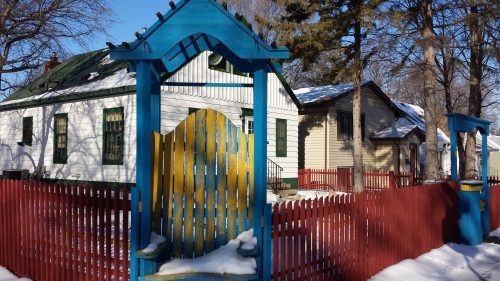 Upon reaching Penn Avenue, I initially turned one block south before heading back northward. This 3300 block of Penn Avenue North is entirely occupied by the Lucy Craft Laney Community School, known more briefly as Lucy Laney and at greater length as the Lucy Craft Laney at Cleveland Park Community School. The longer name refers to the school’s location next to Cleveland Park, which itself was named an earlier school, Cleveland School, which was replaced by Lucy Laney. (Trivia: Lucy Craft Laney and Grover Cleveland are also linked by both being children of Presbyterian ministers.) The school building’s most apparent distinction is its colored brickwork. 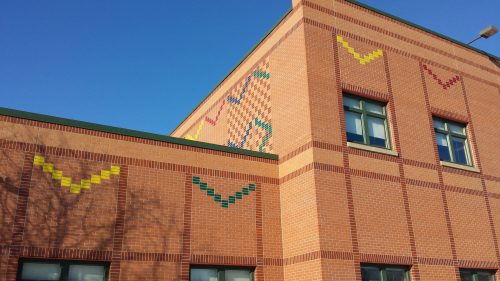 I took Penn north to 35th and then headed back south on Queen as far as Lowry, the start of a process of looping back and forth on the alphabetical avenues. Or rather, I approximated as best as possible taking Queen from 35th to Lowry. The 3300 and 3200 blocks of Queen Avenue are displaced by the school and the park, respectively, but in each case there’s a reasonable alternative for pedestrians. The 3300 block is replaced by the school’s driveway, though that’s enough further west that it is barely separated from the mid-block alleyway. The northern half of the 3200 block is replaced by a pathway through the park. 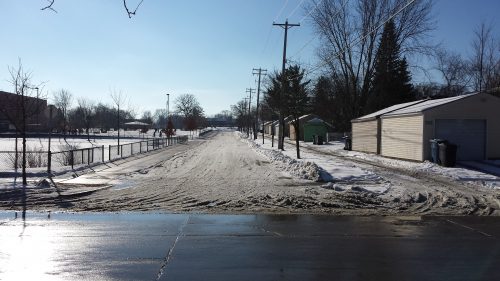 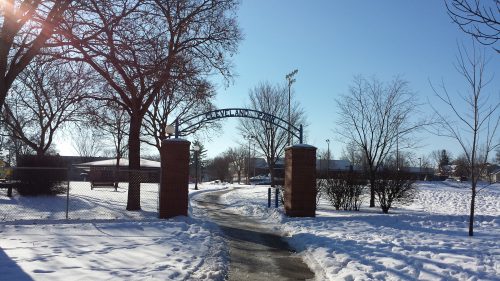 The park wasn’t heavily utilized on a weekday morning in winter, though one brave soul was flying a drone over the snow. The park has two playgrounds aimed at different age ranges; the photo below is of the “tot lot.” 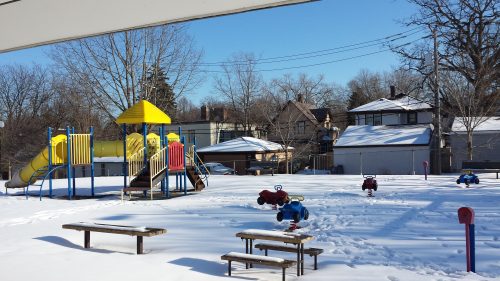 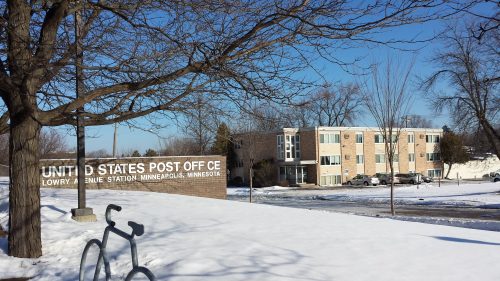 My next north/south loop was on Russell and Sheridan Avenues. Being a residential neighborhood, it was the little details that called out to me. For example, in Russell Avenue’s 3300 block, a house on the western side featured a dressed-up group fashioned from snow, while a neighbor on the the eastern side had an interesting trapezoidal house number, which I noticed echoed the shape of the rooflines. 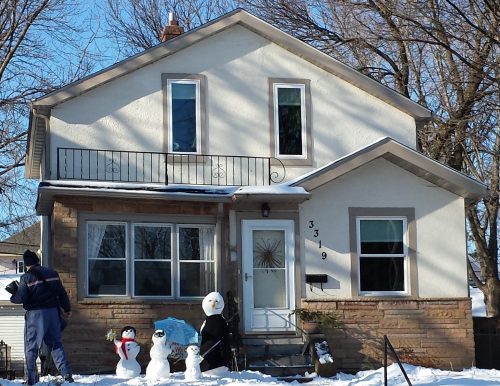 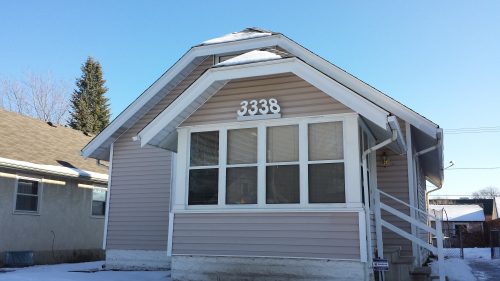 Coming back southward on Sheridan, I appreciated the aqua woodwork on one house, which seemed fitting for its 1950s style. I’d never before noticed how much of accent role the soffits can play — I’d say they are just as important in this case as the vertical trim around the glass block doorframe. 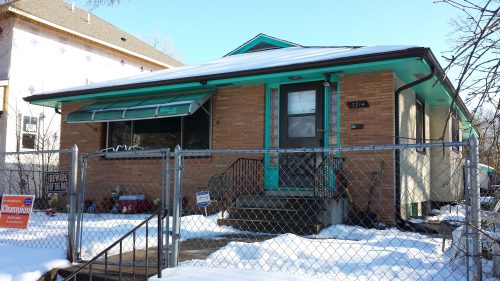 A block further south, one house stood out from its neighbors by virtue of its setback. This is a phenomenon I’ve noticed in other neighborhoods as well: most houses are at a common distance from the street, but every once in a while one is substantially further back, often — as in this case — aligned to the alleyway rather than the street. What makes this case more interesting is that the city’s property database lists it as dating all the way back to 1900, the oldest of all the houses I looked up from this day’s walk. (That’s not long after this area was annexed into Minneapolis in 1883.) For a house of that age to have been torn down wouldn’t be surprising. Was there perhaps another house in the front of this lot? [Update: the building permit index card shows only one house, dating to 1911.] 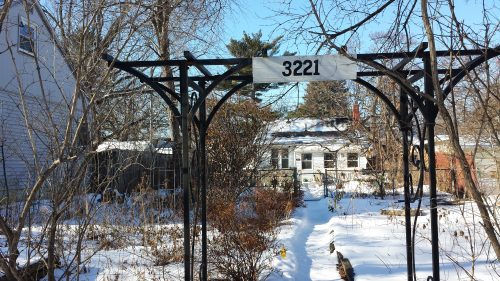 My next northbound pass, on Thomas Avenue, provided a good example of houses of varying ages (1946, 1962, and 1901) sitting cheek-by-jowl. My regular readers will be able to predict that it was the pastel-hued house from the 1960s that particularly tugged at my heart. Even though I would never wear bell-bottoms to signify my own origins in that decade, I’ve got a weakness for buildings that so proudly display their age. 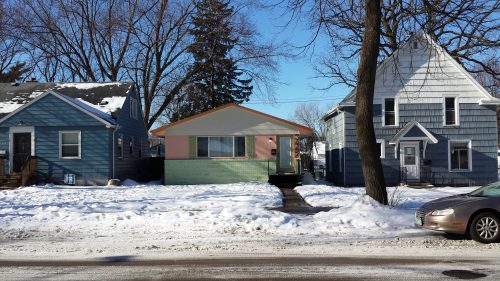 Just before I turned from 35th Avenue onto Upton, the rear of the corner house caught my eye with a hand-painted sign calling for wisdom; the decorative motifs surrounding this word included the classical touch of an owl. 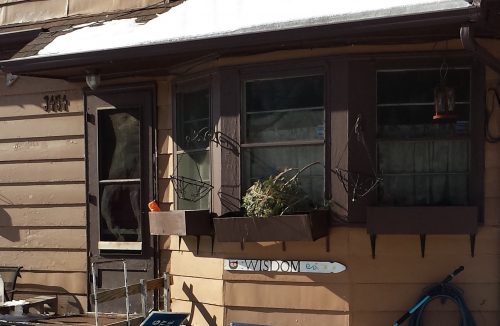 Taking Upton to Lowry brought me to my lunch spot, Tootie’s on Lowry, which occupies a 1920s commercial building surmounted by a large satellite dish and bearing a sign advertising turkey dinner on Thursdays. 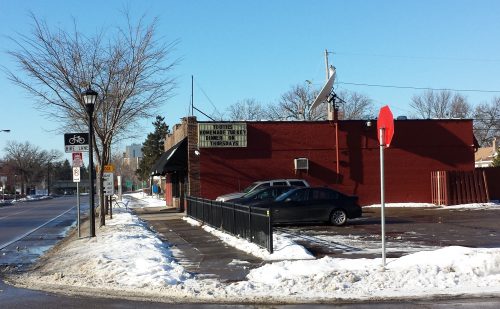 Before going in, I took a look at the Cleveland Neighborhood Garden, which lies west of Tooties. In addition to the main sign on the corner and a few other large ones (such as “Compost”), the garden has lots of little signs that were barely peeking out of the snow. (One said to stay on the paths. I have to assume paths are visible when there is no snow.) Some identified particular herbs and vegetables, but the most interesting said “please pick.” 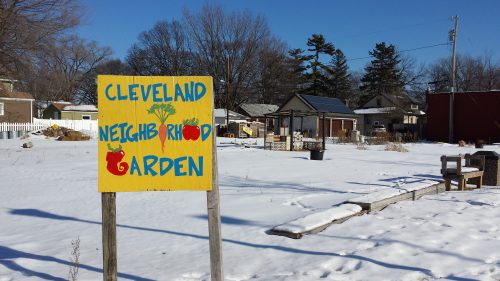 Even though one section of the garden, near the building, was identified as “Tootie’s Plot,” I knew I wasn’t going to get any fresh garden produce in January. So what did I order once inside? The two most appealing menu options were a burger or a Reuben. So, I decided to split the difference and ordered a Reuben Burger, a burger with swiss cheese, sour kraut, and thousand-island dressing on a dark bun. 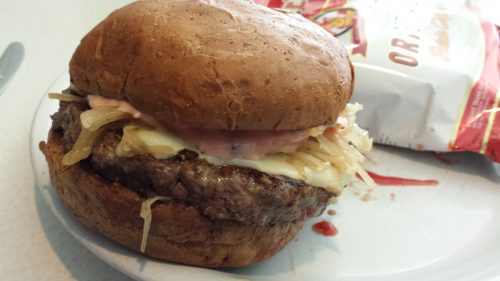 Reuben Burger at Tooties on Lowry

I’m enough of a traditionalist to have had my misgivings about the concept, but actually it makes a lot of sense: the richness of a burger really calls out for some acid. (That’s the common factor among the classic burger toppings of ketchup, mustard, and pickles.) So why not?

The burger itself was a substantial, meaty patty. I had guessed right in ordering it grilled “medium,” which turned out just the way I like. Indeed, it was tasty enough that I’ve now settled my burger-or-Reuben dilemma — if I should ever find myself back in this area at a mealtime, I’ll definitely order a burger. My drink was also up to snuff: a Bell’s Two Hearted Ale on draft.

After lunch, my final loop north and south was on Vincent and Washburn Avenues. In the 3400 block of Vincent, I spotted one of my all-time favorite signs, up there with the “No Clowns Allowed” sign I saw in Audubon Park. This one said “NO SOLICITING: We are too broke to buy anything. We know who we are voting for. We have found Jesus. Seriously, unless you are giving away beer, PLEASE GO AWAY!” 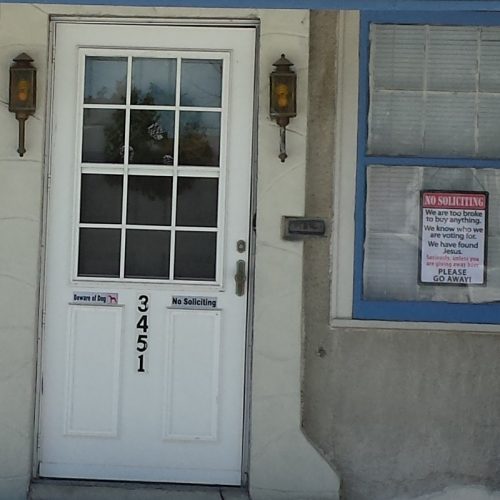 No Soliciting (Unless You are Giving Away Beer), 3451 Vincent Ave. N.

Back on Lowry at the western edge of the neighborhood, the only way a vehicle can turn north is the on-ramp to Bottineau Boulevard (Highway 81), but as a pedestrian I was able to return to my starting point on Washburn Avenue, where it and Xerxes come together in calm isolation from the traffic. The large building just visible in the background of this photo is North Memorial medical center in Robbinsdale. 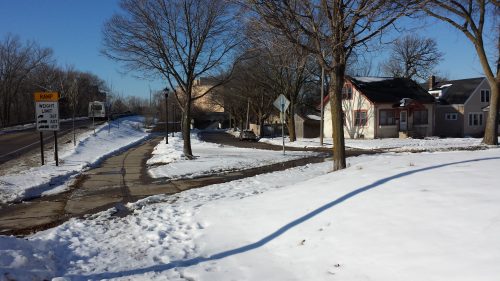 Pedestrian Connection from Lowry to Washburn and Xerxes

Editor’s Note: Max Hailperin is walking each of Minneapolis’ 87 neighborhoods, in alphabetical order. He chronicles his adventures at  allofminneapolis.com, where the original version of this article was published January 19, 2017. We’re sharing them here at streets.mn, at a pace of one or two walks per week.