This is part of a series of posts about a study on Little Canada’s transportation infrastructure for people who take transit, walk, and/or bike.

In Transit: Parts One and Two, I discussed my motives behind my study along with some information and statistics about transit ridership in Little Canada. This part has an analysis of Little Canada’s pedestrian infrastructure.

Walking In An Inner-Ring Suburb

Depending on where you live in Little Canada, some amenities are within a close (<15 minutes) walking distance. The western side of the city along Rice Street and Little Canada Road is where most of our retail is. Little Canada has no major retail centers, but it has a few strip malls. Other business sectors around the city tend to be along an arterial or collector roadway. While it is easy to drive to these businesses, it can difficult and/or dangerous to walk to them. The good news is that it is getting easier and safer to walk here, though we still have a long way to go.

North of Larpenteur, Sidewalks Are Sparse 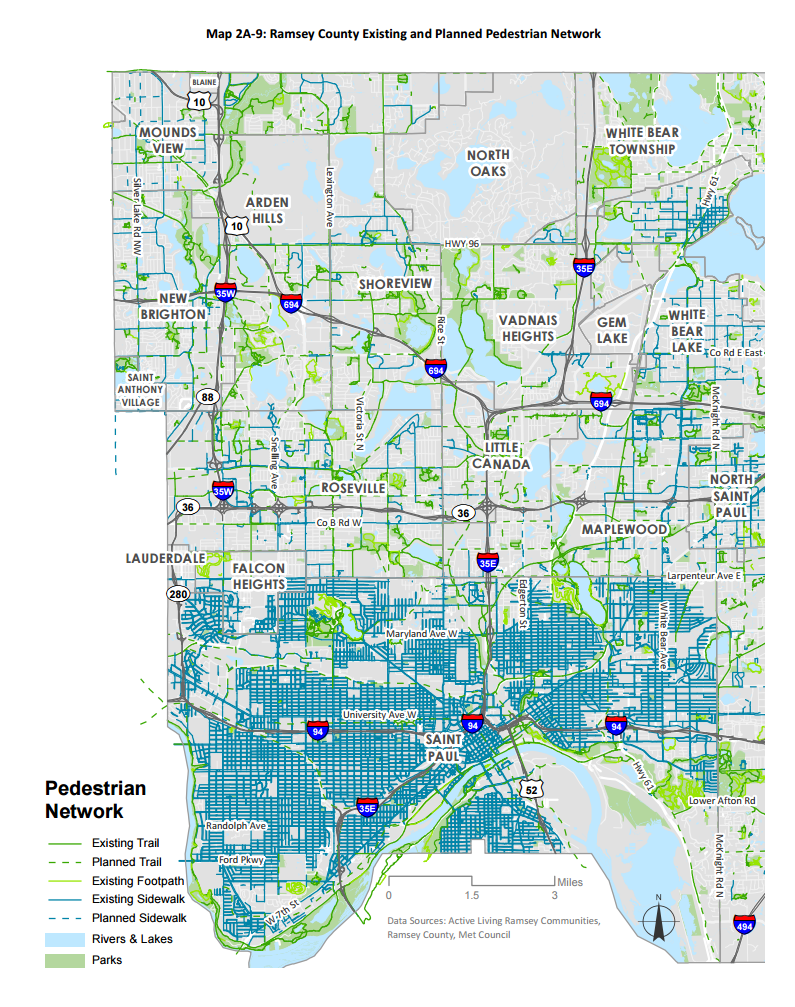 Ramsey County’s Pedestrian Network Map shows an obvious contrast in the density of sidewalks north of Larpenteur Avenue and east of McKnight Road.  Both Larpenteur and McKnight define the border between Saint Paul and suburban cities in Ramsey County. There has been some recent changes to the network, as more sidewalks were built since this map was posted a year ago. Within the past couple years, Little Canada has gotten sidewalks along Little Canada Road and Centerville Road. I have also noticed more marked crosswalks as well. These improvements are welcome and help connect our community, though we have much room for improvement. The busiest corridors for drivers is also likely the busiest corridors for walkers. Despite this, our busiest corridor (Rice Street) lacks sidewalks on either side of the street north of County Road C, except for a few parts. 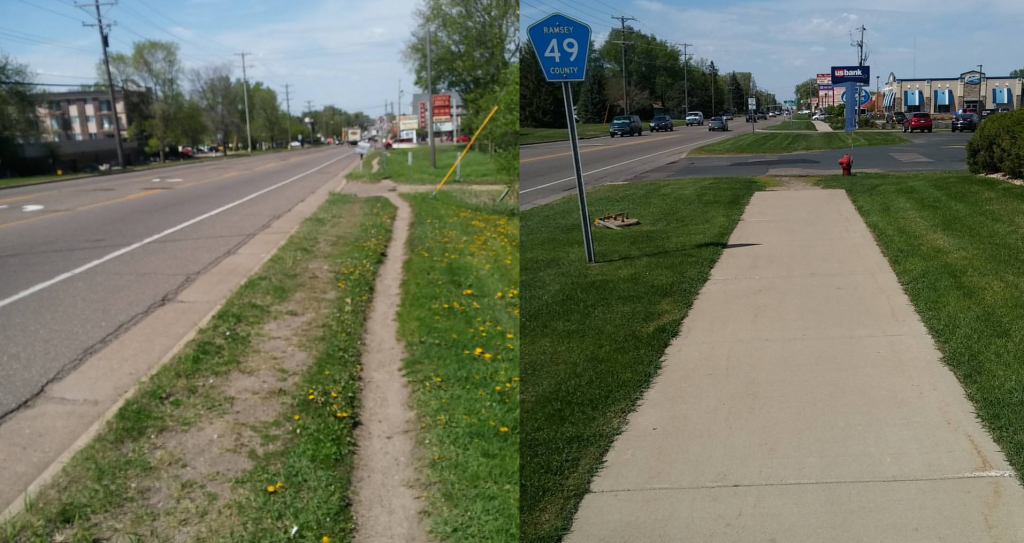 Most walk on the grass or the shoulder of Rice Street north of County Road C due to the lack of sidewalks. Desire paths show the demand for sidewalks along this corridor. Sidewalks from developments built within the past decade end right at the property lines, leaving gaps. Source: Self-taken (May 2016)

Another issue with sidewalks is that it is difficult to reach them if they are on the other side of the street/road. An example of this is during my walk to my bus stop in the morning, where I have to cross County Road C to get to a mixed-use trail. 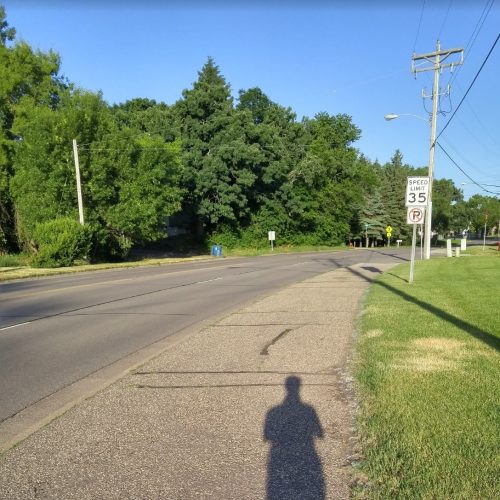 County Road C (CSAH 23) near my house in Little Canada. I use this trail to get to/from one of the bus stops I use to commute to MnDOT’s Central Office. During wet conditions, I have to keep to the right side of the trail to avoid getting splashed by drivers hitting puddles in the right lane. Source: Self-taken (June 2017)

County Road C is a four lane undivided road between Victoria Avenue (Roseville) and Little Canada Road; this is dangerous for all users of the roadway. I believe that converting the road to a 3-lane layout similar to Rice between County B2 and Interstate 694 would better serve the local neighborhoods. The road only sees about 8,000 vehicles a day near my home, while Rice sees twice as much traffic. Even in Roseville, County Road C’s traffic volumes are under 12,000 east of Snelling Avenue.

Traffic volumes have stagnated over the past decade or so on County Road C between Snelling Avenue and Little Canada Road. Both cities are already developed and aren’t planned to see much more growth except in employment (according to the Metro Council). Road diet feasibility is based off FHWA studies. Traffic volumes are from MnDOT. Source: Self-created

Its current layout encourages speeding for through traffic, which discourages people to attempt to walk across the road during rush hour. If you get hit by a car here, you likely would face serious injury or death based off various crash statistics. Since drivers often go 40-50 mph, it is hard to decide when you can cross the road safely. It is a shame since people do like using the trail along the road, and it would likely be used even more if it was easier and safer to reach.

More positive benefits of a 3-lane layout include the ability to have a shoulder. Despite Rice’s lack of sidewalks, the fact it has a shoulder is still better than walking in tall grass. Residents who live along County Road C have to stand in the right lane to access their mailboxes, which is very dangerous for them. Given the modest traffic volumes, various safety hazards, and other issues it would seem best to re-stripe this as a 3-lane road. Negative impacts of a 4-3 lane conversion would likely be slight delays occurring at the Rice and County Road C stoplights as a result. Re-calibrating traffic lights can help reduce the impacts of queuing. Four-to-three conversions can also reduce speeding, while still benefiting local and through drivers. Local drivers benefit from the center left turn lane, while through drivers can keep going steadily without being delayed by drivers taking left turns. I understand that this road is a minor arterial, and acts as an “augmentor” for Highway 36, but that does not mean its layout needs to favor mobility of through drivers over the safety of all users.

Why This Negatively Impacts Our Community

Sidewalks are an essential part of vital communities. The connectivity of a sidewalk network is vital to both serve people who have no choice but to walk, in addition to convince people to walk instead of driving. Most trips are not commuting-based, yet transportation planning often focuses on work commutes. People’s willingness to walk in pleasant vs. inclement weather does vary, but making it easier to drive to places that are close by is expensive for both the public and private sector. The city has few issues with parking capacity, and most of our lots are underutilized for most of the day. Parking only becomes an issue in some areas near apartments, or during festivals such as Canadian Days. I walked to Canadian Days last year (~25 minutes), and preferred doing so than spending time trying to park. Walking can be easier than driving for trips within a mile or two, and is much cheaper. I have driven to the park-and-ride at Rice and Highway 36 before, but it’s quicker for me to walk to the bus stop instead. There will always be people who are unable to walk, but that does not negate our need for a better multimodal transportation network. In order to do so, safety issues need to be addressed. I see children and teenagers cross County Road C to reach the trail to get to Acorn Park, visit the convenience store, and pharmacies. I see people get off the bus on Rice Street and walk on the shoulder to get back home (such as myself on Demont Avenue). I would like to prevent another tragic fatality in Little Canada from happening again by making it safer to walk here.

The County and City’s Plans

Both the city and county have set plans in place to improve their sidewalks and trails. The city is currently in the process of updating their Comprehensive Plan, so it is likely that a sidewalk/trail plan would be implemented by the end of 2018. The county has an extensive long-term plan, with various proposed trails. A county-wide sales tax increase for funding multimodal projects approved recently should help fund the county’s planned trail network. As previously stated in Transit: Part Two, Rice Street was planned to be rebuilt in 2019; the county now has pushed that back to 2021. An old plan from 2012 shows sidewalks would be built on both sides. This project has been delayed for years due to property acquisition issues between the city and county, as the ROW of Rice requires the county to acquire private property if they want to widen it. 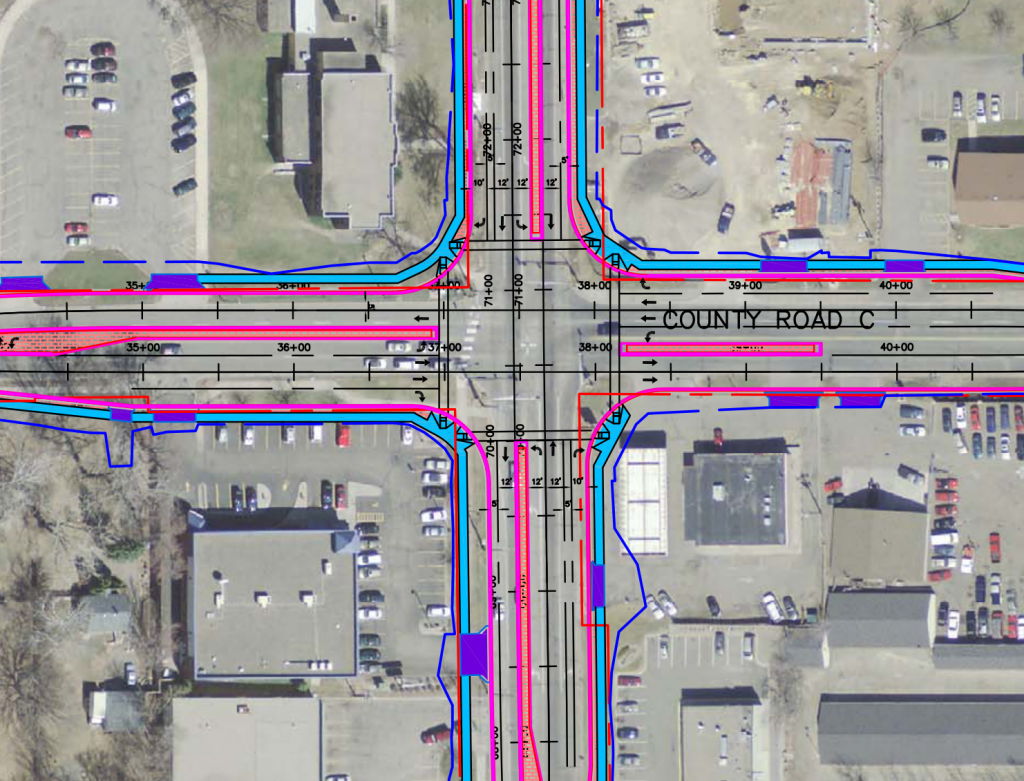 Ramsey county seems open to the idea of 4-3 road conversions (with caution). The county has done some 4-3 conversions already, and has proposed more. A recent conversion just occurred on Fairview Avenue in Roseville. They are also doing a test on Maryland Avenue on the East Side of Saint Paul. I hope the test goes well, and can be used as an example to make our roads safer for all users. The results of this test will influence the decisions made on Rice Street’s redesign in the North End of Saint Paul. Previous 4-3 proposals have been tabled due to community opposition, and the 3-lane proposal on Rice has its opponents. A proposed 4-3 conversion to Dale Street was blocked in 2014, when the District 10/Como Community Council and some residents were against it. I recently drove on this part of Dale during rush hour, and many drivers often behaved impatiently and dangerously. Aggressive weaving occurs often; this rarely benefits the driver as the stoplights aren’t calibrated for people going 40-45 in a 30 mph zone (for good reason). For example, a woman who flicked me off and sped past me near Maryland only ended up two cars ahead of me when she turned left on County Road B. I caught up to her at every stoplight. I don’t consider Dale as a safe road for the Como and North End community, and the county’s proposal could have helped make it better. If the county ever did come with a 4-3 proposal on County Road C, community opposition would likely be the largest barrier to it. People who may have initially opposed 4-3 conversions have changed their mind after the conversion goes through, such as in Sioux Center, Iowa: 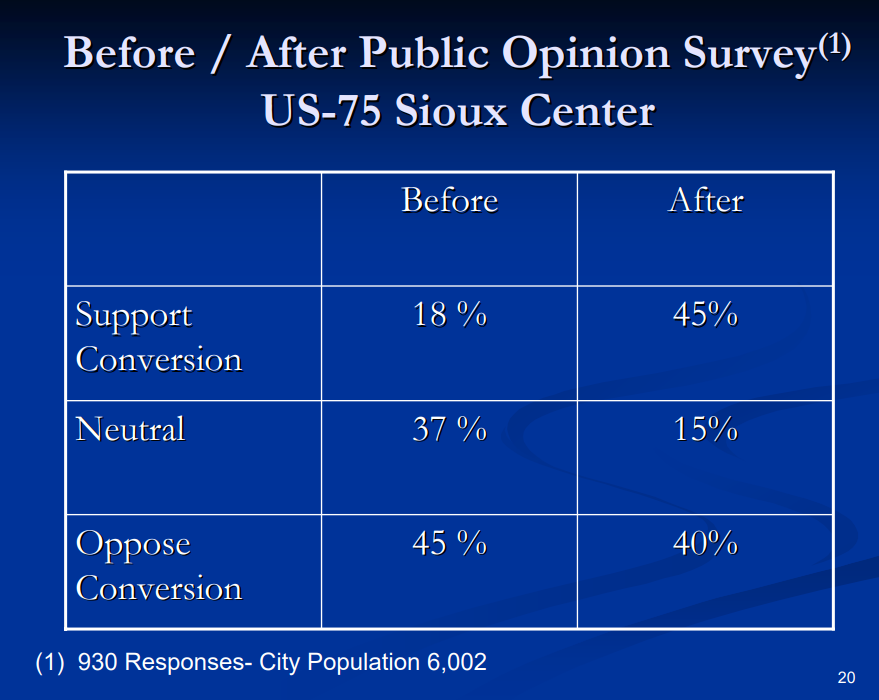 Public Opinion of 4-3 Conversion on US 75 on Sioux Center, IA. Many were initially skeptical, but ended up supporting it after it was done. 40% still opposed it afterwards. Source: Iowa DOT

Should have sidewalks on both sides of roadway, unless right-of-way issues make it unfeasible. There should be a sidewalk at least on one side of the roadway. If the sidewalk is just on one side of the road, ensure there is a marked pedestrian crossing every quarter-mile to half-mile of the roadway. Implement technologies such as flashing beacons (ex: RRFBs) if deemed necessary for ensuring the safety of people crossing. Exceptions to marking crossings may occur if it is in an area with sparse residential or retail activity. At intersections that have stop signs or are signalized, all crosswalks should be marked with stop lines for drivers to avoid encroaching in a crosswalk.

Should have a sidewalk at least on one side of the roadway. Marked crossings are recommended, especially when intersecting with arterial and other collector roadways.

Sidewalks can be optional, though are recommended to ensure the safety of people walking. Likely contingent on if its financially feasible.  Community support would help increase likelihood.

This was cross-posted from (sub)urban studies.