My first and second days in Columbia Park covered nearly all of the streets east of University Avenue. Therefore, on my third day, I focused on areas further west, although not as far west as the neighborhood extends. (From St. Anthony Parkway north to 37th Avenue, the neighborhood goes all the way to the river, indeed halfway across the Camden Bridge.)

I started and ended at the point where the three-block-long, curved Edge Place NE ends in a T intersection with Main Street NE. That’s a stop for the number 11 bus and is also the junction between two distinct portions of my walk.

First I walked southward and eastward along the long red spurs shown in the map below, a mile and a half of streets that I needed to walk twice to return to my starting point. Then I turned northward and eastward to densely loop through the grid-like residential area anchored by Hi-View Park. That walk consisted of a 1.8-mile, four-cornered main loop (the shape of a Bowen Knot) and a half mile worth of blocks that I walked twice.

Just south of my starting point, the east-west Canadian Pacific (née Soo Line) tracks that head across the river cross over the narrow waist of the huge north-south BNSF (née Northern Pacific) Northtown Classification Yard. I was able to watch one freight train rumble across the upper level while other freight cars stood on the lower. 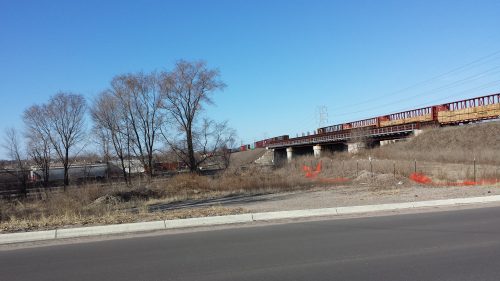 The east-west line also passes over Main Street, so I walked directly under it. The cars passing over me just then were tank cars labeled “molten sulfur,” which made me wonder how the contents were kept molten for a long, cold train ride. Thanks to Google and the web, I now know that these cars are jacketed with fiberglass insulation and heater coils. I also learned they have pressure relief vents, which happily did not blow as I walked under them.

Slightly further south, this portion of Main Street ends at St. Anthony Parkway. I had no choice but to turn east on the parkway, because the bridge to the west, leading over the Northtown Yards, is in the midst of a replacement process. In the background of the below photo the new bridge’s construction is underway, while in the foreground it seems that a hunk of the old bridge was left sitting between the rails and Main Street. 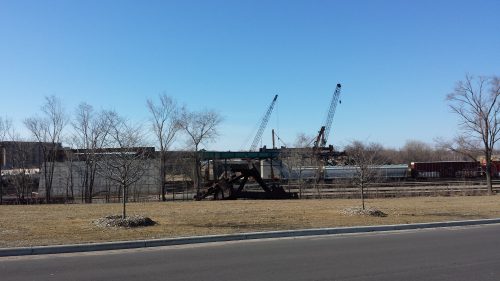 I walked east on the parkway just far enough to cross over University Avenue to 4th Street; I had walked everything further east the previous day. I turned south on the pedestrian path that occupies the narrow strip between 4th Street and University Avenue. At 30th Avenue, I turned east again, entering the Shoreham Yards area at its main intermodal terminal entrance. I had seen a few trucks hauling containers in and out to Central Avenue at 28th Avenue, but clearly the bulk of the traffic is on this western side of the yards. Truck drivers can head into one area for on- or offloading of full containers or another for the depot of empty containers. I took a photo of one small portion of the empties. 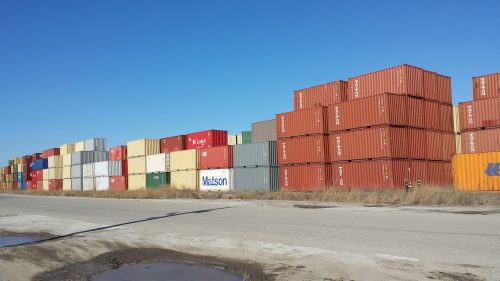 I backtracked to University Avenue without having succeeded in getting a clear photograph of my real quarry, one of the container lift trucks in operation. However, you can find a couple photos of them at the bottom of the web page for the intermodal terminal. Trust me, they are cool.

From the bridge carrying University Avenue over the BNSF tracks, I was able to take one last photo of Shoreham Yards, this one featuring the grain bins and cell phone tower that I had previously photographed at a greater distance from the opposite side. Seen from the west, it is clear that the modern metal grain bins are adjacent to an older elevator labeled “MALT-ONE.” 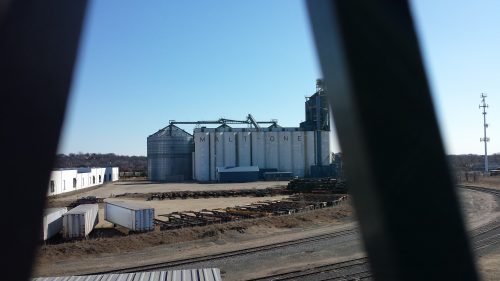 Another view from the bridge, looking more southward, revealed just how closely the curved CP tracks in Shoreham Yard approach the BNSF tracks running south from Northtown Yard. Indeed, though you can’t tell it from the photo, there are interchange tracks connecting the two carriers here. 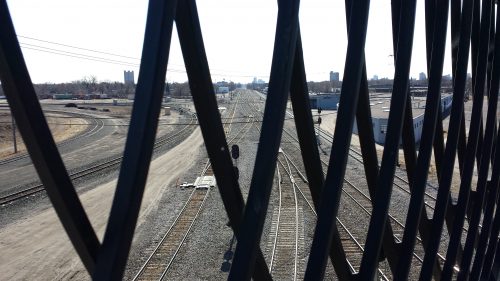 CP to the Left, BNSF Straight Ahead

South of the bridge, I turned east for the single block that 27th Avenue runs before dead-ending for lack of a track crossing. (I had previously walked the avenue on the other side.) This corner of University and 27th Avenues is home to BagTape Closures.

I then backtracked all the way to my starting point at the southwest corner of Hi-View Park. This park was acquired from the state in 1950 and named Highview for its elevation and the view it provides of the downtown skyline. The spelling was changed to Hi-View in 1955; I can’t help but connect this to the rise of the term “Hi-Fi” over the same five-year period. (A few years later, it was already becoming clear that this nomenclature was overused.)

The southern portion of the park includes picnic areas and basketball hoops. Across Main Street, BNSF has some of its Northtown shops. 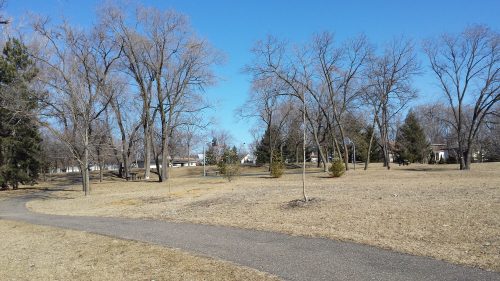 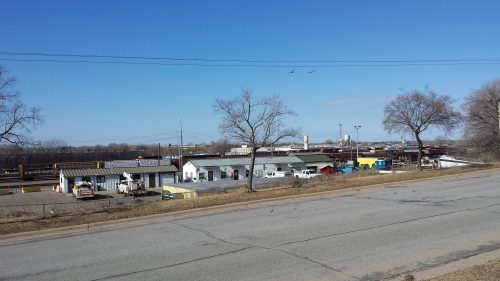 Although much of the surrounding residential area looks like it was also built up (or filled in) during the 1950s, scattered houses clearly are much older, matching what I’d seen in the 1914 atlas, where a smattering of the platted lots had the yellow rectangles on them denoting wood-frame buildings. For example, on Main Street just south of 36th Avenue, there is a two-story house that stands out from its neighbors. 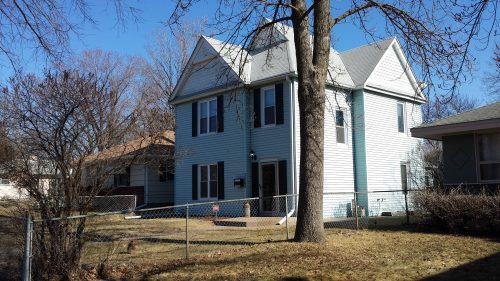 Returning to 35th Avenue, I turned east. The house on the northeast corner has some solar thermal panels, one of several places in the neighborhood where I saw solar energy being tapped. 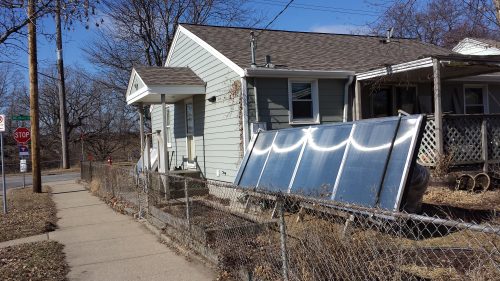 Across the way, the northern portion of Hi-View Park includes some facilities that were refreshed in 2016, including the wading pool (closed for the season) and playground. The playground is divided into two sections, one signed for ages 2–5 and the other for ages 5–12. Both looked attractive; my only regret is that the upper end of the age ranges is so far from my own age. 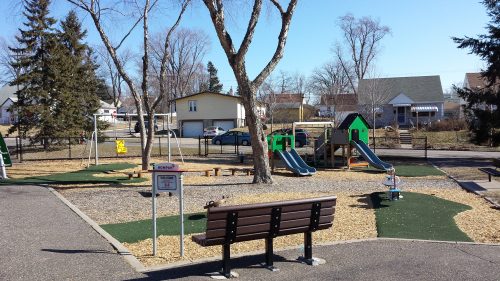 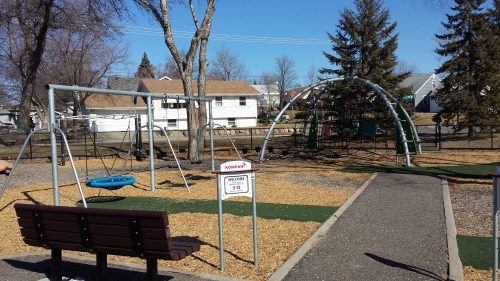 On the southwest corner of 35th Avenue’s intersection with 3rd Street, the dwelling fits the single-story norm of the 1950s, but my eye was attracted both by the gingerbread fascia boards (which I associate with a much earlier period) and by the overall form of the building. The building permit index card shows a 25.6 by 38 dwelling in 1955, a 22 by 28 garage in 1959, and a 12 by 16 connection between the dwelling and garage in 1960. The card doesn’t show a conversion of the garage into additional dwelling space, but that sure seems to have been the final step in the evolution. 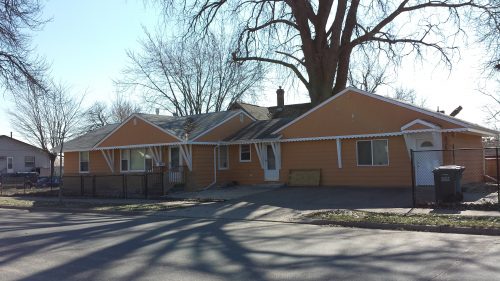 This segment of 35th Ave NE ends just east of 3rd Street. Looking across University Avenue to where I had been on my first day in the neighborhood, I was able to see a side view of the Moorehead Machinery & Boiler Company plant. 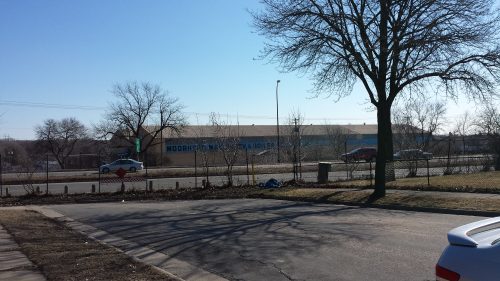 Turning initially north on 3rd Street for a block, I saw another example of an older house remaining from the days of scattered settlement. In the photo below, the leftmost building dates all the way back to 1894 according to its building permit card. 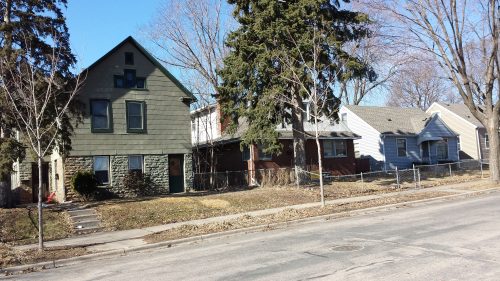 Returning back southward on 3rd St and crossing over 35th Avenue, I spotted some more old houses. 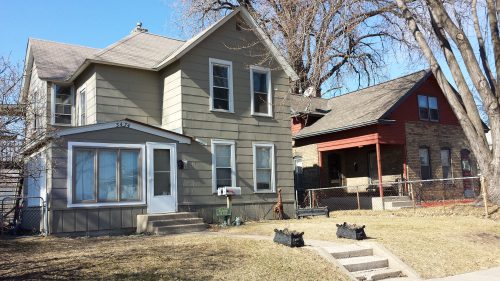 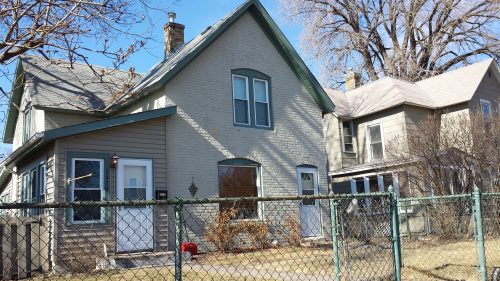 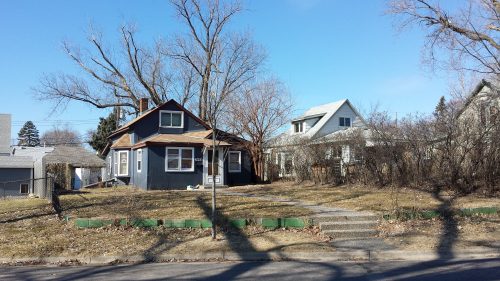 At about this point, 3rd Street transitioned smoothly into the curved Edge Place, which I followed as far as 2nd Street before returning to 2 1/2 Street. The existence of this curved exception to the general street grid reflects a prior railroad alignment. That alignment is shown in the 1898 atlas and seems to have recently changed at the time of the 1914 atlas: Plate 70 shows the new alignment, bending further south and leaving Blocks N and O south of Edge Place vacant, yet the adjoining Plate 69 in the same atlas still shows the old alignment in the small area of overlap.

Heading north on 2 1/2 Street, I noticed a house of intermediate age: not so old as the scattered turn-of-the-century pioneers of the area, but not as recent as the 1950s houses that are the norm. It practically screams 1920s to me, especially once I imagined a porch on the front right where the enclosed entryway now is. Sure enough, it was built between 1924 and 1926, illustrating that this area did not remain stagnant between its initial seeding and later blossoming, but rather experienced a very slow growth that later accelerated dramatically. 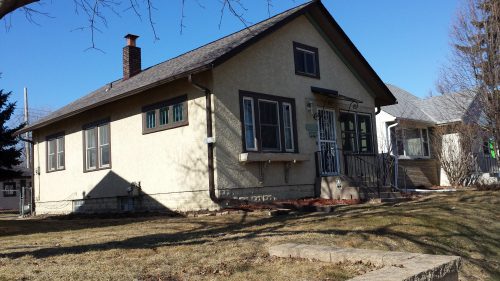 Nor have individual houses remained frozen, as I’ve already pointed out. In the next block, I saw a good side-by-side example of the two approaches possible to structures that are no longer satisfactory. On the left, the original 14 by 24 foot, 1.2-story bungalow from 1908 has been extended not just by enclosing the porch but also by widening the footprint and adding a taller roof. On the right, whatever had been there was torn down and replaced in 2006 by a new two-story house. 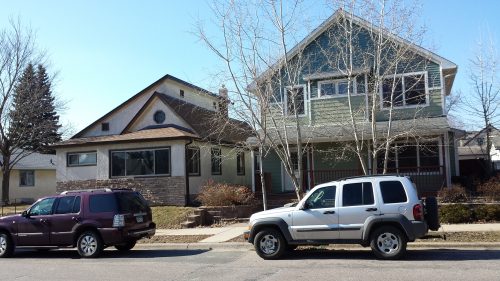 I took 2 1/2 Street only as far as 37th Avenue because that is the northern border of both the neighborhood and the city. Turning onto 37th Avenue, I first explored once block west (to 2nd Street), then two blocks east (to University Avenue) before returning to 3rd Street to turn south.

I had already visited the intersection of University and 37th Avenues on a previous day from the east, but the community garden I then saw on the southeastern corner of the intersection is quite different from the convenience store I now saw on the southwestern corner. Based on the fresh signage and what I saw through the windows, I gather it went out of business rather recently. 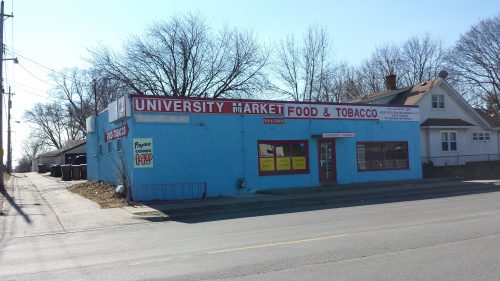 The trees growing in a neighborhood can show the same mix of ages as the buildings do. I noticed a few trees that stood out from the others for their maturity, including both evergreens (such as in the 3600 block of 3rd Street NE) and deciduous trees (such as in the 100 block of 36th Avenue NE). 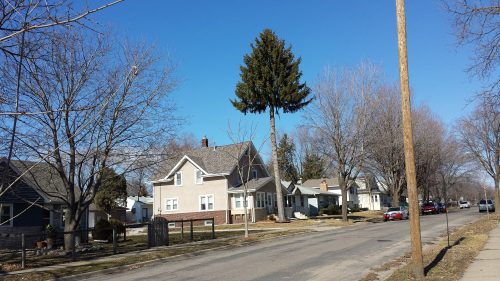 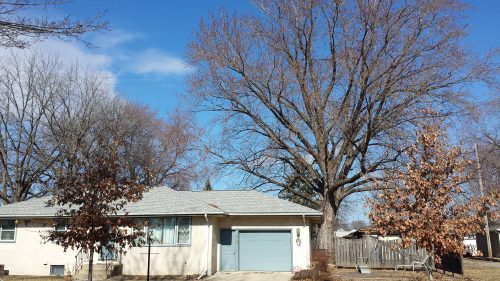 Aside from a short block on Edge Place, my walk ended with a southward traversal of 2nd Street. In the 3500 block, I saw a good example of the age mix: side-by-side houses from 1926, 2008, and 1893. (The 1893 house had additions in 1900 and 1929.) Unlike the 2006 house that I saw on 2 1/2 Street, which was built in a contemporary interpretation of a traditional style, the 2008 house here stands out more distinctly in a modern style. The same block also provided one last example of a solar installation. 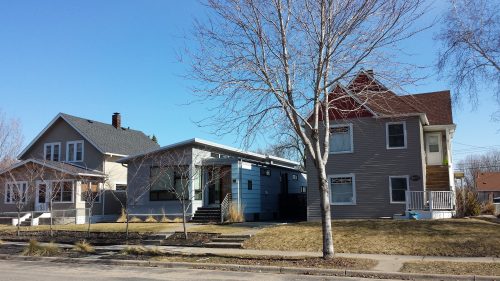 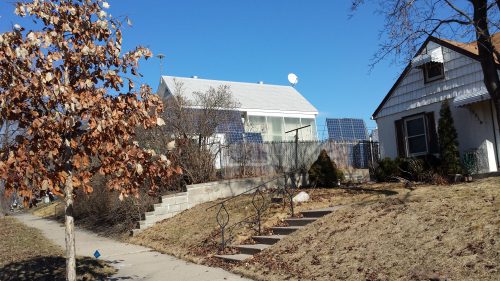 Editor’s Note: Max Hailperin is walking each of Minneapolis’ 87 neighborhoods, in alphabetical order. He chronicles his adventures at  allofminneapolis.com, where the original version of this article was published February 27, 2017. We’re sharing them here at streets.mn.