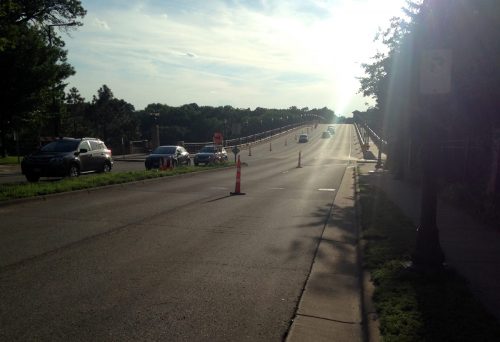 Biking into the sunset from Saint Paul over the Marshall Avenue bridge.

It’s peak construction season, pretty much, and here are some things that I wish were happening with bicycling in Saint Paul.

There are a few good things happening in Saint Paul too, including the completion of the Jackson Street leg of the Capital City Bikeway, more construction of the excellent-looking Grand Round along Wheelock Parkway, (hopefully, depending on a contractor nuance) a protected two-way bike lane along Pelham, and a new bike lane on Wabasha Street (near my house) that will fill a key gap in the system.

So the background here is that Saint Paul finally passed a bike plan about two years ago, which held great promise despite the lack of great funding. The idea is that, with the plan in place, the City would be able to create bike infrastructure in a flexible, tactical way, using crafty grant-writing and opportunistic low-cost investments to eventually get a meaningful network in place.

Well that’s harder than it seems, especially when the city is really struggling with its basic budget. (See also the $32 million hole in the budget thanks to a street maintenance fight.)

Anyway, here are a few things that could have happened this summer but are not happening. I’m sad to report on these specific projects, but if you aren’t going to read this on streets.mn, then were are you going to read it? 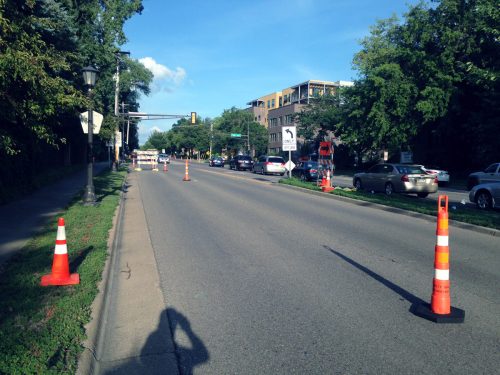 What it is: As I wrote about before on this site, the Marshall Avenue bike lane, one of the busiest in the city, stops short. Just two blocks before you reach the bridge to Minneapolis, the lane disappears at Cretin Avenue. Like many terminated bike lanes, that’s just when you need it, as drivers tend to speed down this hill and the bridge intersection is a bit tricky.

What it could be: The county is re-paving this stretch of Marshall, and it would be a perfect time to fill in the key gap at zero cost to anyone.

East Lake Street and this part of Marshall have traffic counts in the 17-20K range where 4-lanes are not necessarily needed, depending on intersection complexity. It is my sense of this stretch of road, using only personal observation, that traffic bunches up at the intersection, before proceeding easily and quickly and without congestion over the bridge. This is just my opinion, but extending the bike lane to the River Road would not be a big deal from a traffic operations perspective. I don’t think it would change the intersection LOS or stacking very much at all! And it would fill one of Saint Paul’s smallest, most intense gaps in the bike network.

Why it’s not happening: At a recent meeting, I asked County engineers about this, and it seemed to me that the thought had not crossed their minds. 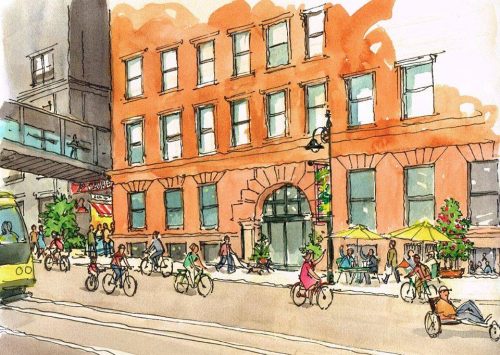 A rendering of 4th Street; this is the kind of drawing that makes you want to move to Indianapolis.

What it is: The light rail along 4th Street in downtown Saint Paul created an opportunity for an very-low-cost bike/ped project. Currently, a key part of 4th Street through downtown is a slow-moving one-lane one-way, from the Union Depot all the way over to Minnesota Street/Central Station. As a result, it has very little traffic.

What it could be: Since the opening of the Green Line, there was some interest and talk about turning this stretch of street into a unique bike/ped connection that would have placemaking, market stalls, and be open to two-way bike traffic. You could do this very cheaply, perhaps only with signage, a few bollards, or some other trickery. The end result would look like a combination of the Washington Avenue transit mall on the University of Minnesota and one-lane stretch of 5th Street through downtown Minneapolis. It would be a bit like Europe.

The benefits would be two-fold. First, bikes would have a protected, convenient connection through downtown, especially going eastbound (where people currently use the sidewalk most of the time). Second, it would help create a vibrant pedestrian connection through the downtown “dead zone,” would could sure use it!

Why it’s not happening: There was a study but now nobody will talk about what happened and why the project was killed. I have attached the report as a .pdf here (4th street feasability study). There are a few parking lots, and it might have been difficult to accommodate emergency vehicles.  My best guess is that some of the influential downtown property owners really did not like the idea, and that engineers were very skittish about anything resembling shared space. And without their support, the City was unwilling to go ahead with the project. 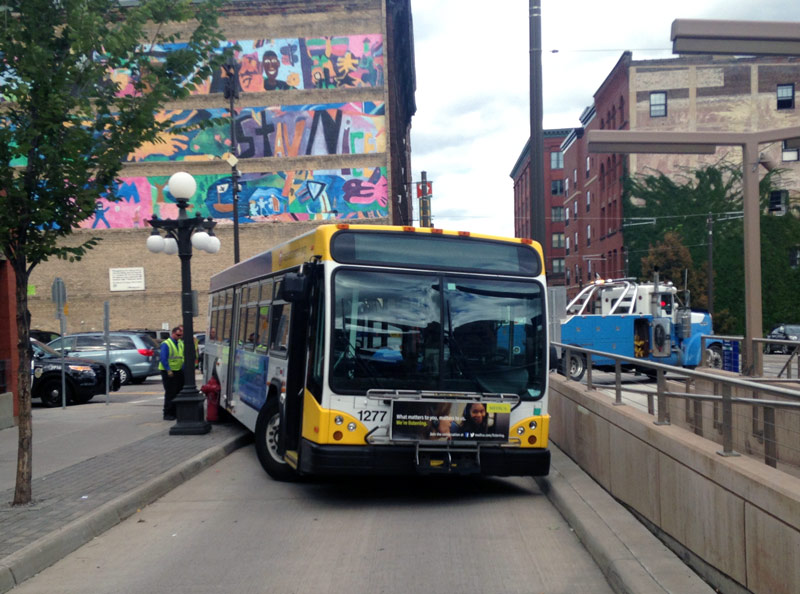 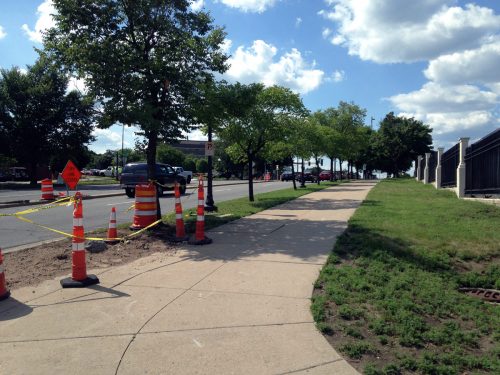 What it is: Currently, Kellogg Boulevard is the #1 barrier keeping Saint Paul from having more bicycles downtown. The Summit Avenue lanes, and connection points to the west like Marshall Avenue, all stop short right when they reach deadly Kellogg Boulevard, which functions like an on-ramp for cars speeding in between two freeways.

But this fall, the city is re-paving a big chunk of Kellogg Boulevard. And happily enough, the recently-adopted-by-the-City-Council Capital City Bikeway is planned for Kellogg. The plan calls for an off-street bike trail running along the northeast side of the road by the History Center and down to the Xcel Energy Center.

What it could be: The City could take the opportunity to add part of the off-street bikeway trail while the street is under construction. Any sort of link from the Cathedral into downtown along Kellogg would be a huge boost for bicycling in Saint Paul. I heard that city staff looked at taking the opportunity to make a link from Kellogg/John Ireland over to the History Center parking lot, where there’s a shortcut down to 10th Street, another leg of the Capital City Bikeway.

Why it’s not happening: The City cost estimate for the one-block leg amounted to a lot of money, something like half a million dollars. (Correct me if I’m wrong?) This one is particularly tragic, because the will is there, especially after Shelby Kokesch’s death at Kellogg and Mulberry. But apparently there’s no money, and it’s really a missed chance. 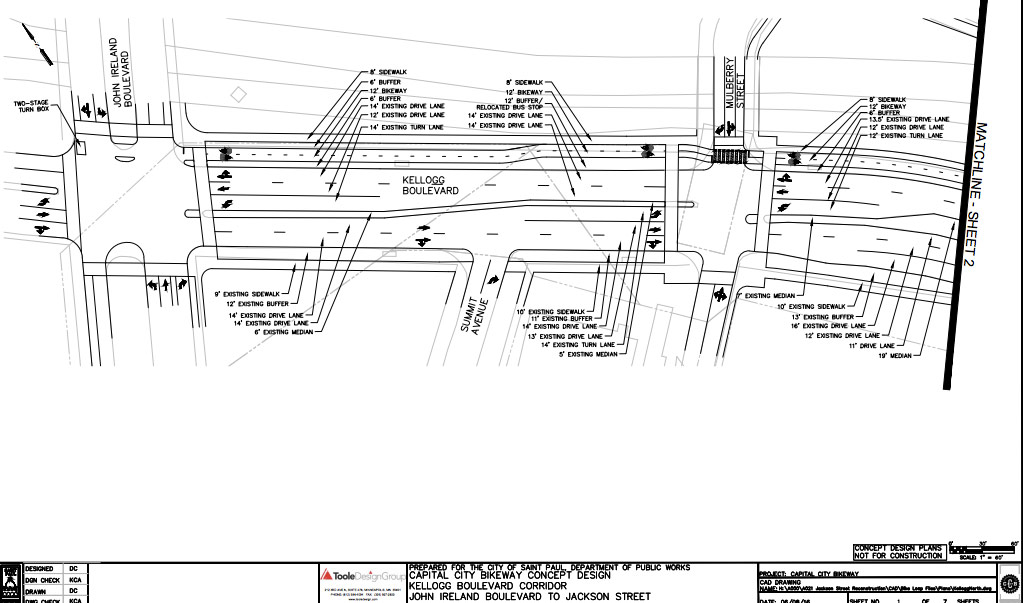 Concept diagrams for the Kellogg section.

What it is: Stillwater Avenue is a low-traffic street on the East Side. The city is repaving the street and could add bike lanes at very low cost.

What it could be: It’s on the bike plan, and Public Works proposed adding bike lanes to a segment of Stillwater, alongside a school and a park. It seemed fairly uncontroversial to me.

Why it’s not happening: It might. We’ll see. The City Council vote tied 3-3, with CMs Bostrom, Prince and Tolbert voting not to go ahead with the bike lane plans.

Final note: My takeaway about it all 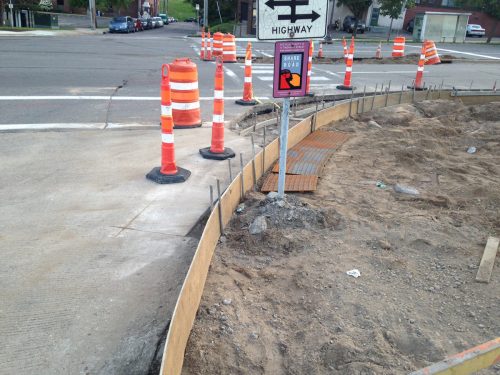 A new slightly tighter curb under construction at the corner of Kellogg and Mulberry, a very dangerous intersection.

Given Saint Paul’s budget woes, we need to seize opportunities to create bike infrastructure while it’s cheap. Chances like these won’t come again for a long time.

The other thing to note is that something like the crucial Kellogg Boulevard segment of the downtown Bikeway will be very expensive, many millions of dollars. But it’s also the one thing that will connect Saint Paul’s bike lanes together at long last. It’d be great instead of raising money from East Metro business types for a quickly-melting ice castle, we’d invest in something that would last many lifetimes.