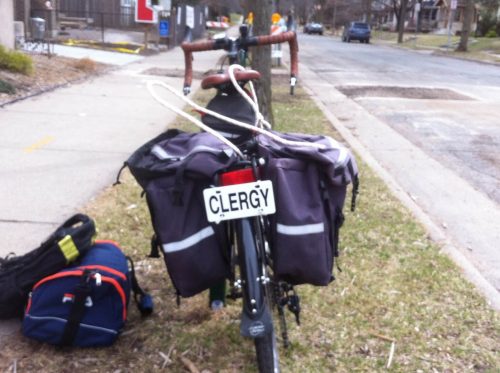 The podcast this week is a conversation with Travis Norvell, aka the Pedaling Pastor. Norvell is a pastor at the Judson Memorial Baptist Church in South Minneapolis, and is also an avid bicyclists who blogs and tweets using his handle, the Pedaling Pastor. We sat down a few weeks ago at the Bad Weather Brewery in Saint Paul to chat about the intersection between faith, bicycling, and the face-to-face work of being a pastor with a congregation full of people.

It was really interesting and we covered all sorts of fascinating territory, from West Virginia to New Orleans to bike lanes in Minneapolis. We even and a guest appearance by Ian Campbell, a brewer and urbanist at Bad Weather Brewery. I hope you enjoy this fascinating conversation.

If you have ideas for podcast guests, or would like to sponsor future episodes of the streets.mn podcast, please reach out to me, Bill Lindeke, for more details. The podcast intro music was written and produced by Dan Choma. Thank you so much for listening.

Q: How did you get into bicycling?

One time I went to DC on a school trip and it was the first time I saw a dedicated bike lane. And I remember thinking, that’s pretty cool. How come we don’t have those in West Virginia?

Not to be too critical of my home state, but bicyclists were not really tolerated, and told to get off the road. We were on top of a mountain in a little town in West Virginia and i started riding a bike and after the first week we were coming down the road and this truck comes down beside me, stereotypical of every truck you might see in appalachia and the throws this 12 oz. beer bottle at me. And I thought to hell with this, it isn’t worth it, it’s not worth it. And i put my bike up and that was it.

Then we moved to New Orleans, and I thought now I’m in the greatest place in the world to bike. So I started off riding and bought a Breezer bike, I didn’t fathom in my mind that every day at 4pm it rains. And it was extremely humid. But I would arrive at the hospital or somebody’s house an the fire thing they would say is, “can I get you a shirt?”

And it created a really bizarre dynamic. People just weren’t prepared to think of riding a bike as part of the job.

But then one day i preached a sermon on “Christian socialism”, and my daughter, I was putting her to bed, she said, “hey dad what are you going to do about life and living this way?”

So I thought about it, and I stayed up half the night researching stuff and in conjunction with that the heater went out on my Volkswagen.

So I said OK. I called a family meeting and said we’re selling the car and I’m going to just ride a bike. I don’t know where the idea came from, maybe a long lost dream. But we sold the car and I got a bike and I said, I can do this. There were enough people out there riding a bike that I thought, OK. If they can do it i can do it. And the Twin Cities aren’t that big.

Q: Does bicycling help you be a pastor? If so, how?

The picture I have of my mind most when i think about driving a car versus riding a bike. I will do this as an experiment at a stoplight look at everyone who is driving a car, how many people have an genuine expression of joy on their face?

Versus how much do you see people riding a bike scowling? Whether its being exposed to the weather, feeling the wind, it opens you up to a different way of experiencing life. And also it opens you up to encounters with other people more so than driving a car, because your’e in a pod an enclosed capsule that prevents you from having any intimate connection. It puts me more at ease. When i ride to church or to visit somebody i’m automatically, between where i take off and where i land, there’s always someone that i run into. It sets you in mind to be present with someone.

Q: What do you mean by “being present”?

Presence is such a key factor, if i’m gonna really listen to you express your joy or concerns, i can’t have my mind somewhere else. And biking generates a biochemistry, it’s an analog motion that enables you, you’re physically doing something, and enables you to listen to someone more so than when you’re driving. It engages your sense in such a way that I’m not thinking about whether I missed an email or the radio show that was just on. I’m here, tell me what’s going on…