The more of Minneapolis I walk, the more I see that the city’s pattern of growth and development was shaped not by roads of asphalt or concrete, but rather by those of steel, as described in Legacy of Minneapolis: Preservation Amid Change. Beyond the shape of the neighborhood, its residential character is a product of the employment opportunities that clustered on the far side of the tracks, the Minneapolis-Moline tractor factory surely foremost among them.

Present day development is once again being influenced by tracks, this time by the METRO Blue Line light rail running along the near side of Hiawatha Avenue. I started my walk with this transit-oriented part of the neighborhood, getting off the number 21 bus at the point marked A on the map (Lake Street and 22nd Avenue) and walking one block east to the Blue Line’s Lake Street / Midtown Station, where I turned onto the trail that runs between the light rail and avenue. I followed that to the neighborhood’s southern border at 36th Street before retreating to where I could cross the tracks at 35th Street. (More generally, the red lines on the map indicate forward-and-back spurs off of the main blue route from A to B.)

Since the light rail’s construction in the 2001–2004 period, residences of varying density have been built immediately to the west. For example, the first photo shows the Blue Line Flats at 32nd Street and the second shows a cluster of houses at 35th Street. 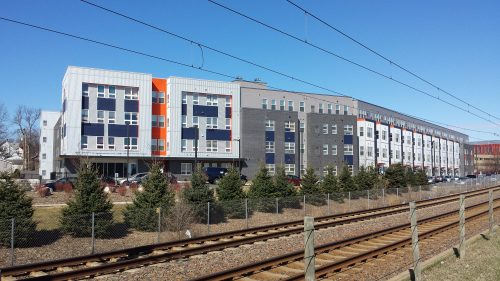 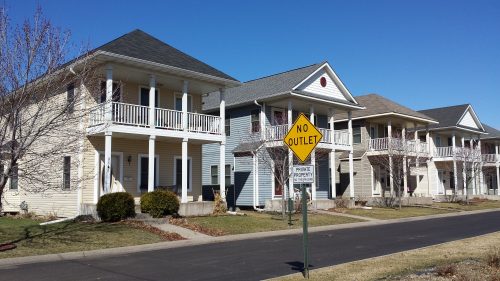 Away from the light rail, concentrated new construction gives way to a mix of houses, duplexes, and small apartment buildings that have variously been rebuilt, remodeled, spruced up a bit, or none of the above. Rather than cataloging the full range, I noted a few that particularly struck my fancy. For example, the single-story house at the northeast corner of 24th Avenue and 33rd Street caught my eye for how the homeowner had preserved such details as the metal awning and the thermometer that is mounted under it on the doorframe. The core 24-by-24 house dates to 1905, but the current appearance reflects the 1950s, when the building was expanded. 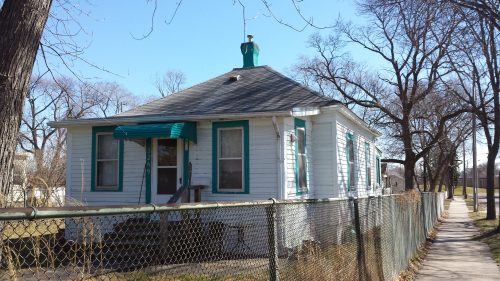 The building at the southwest corner of 24th Avenue and 32nd Street stands out for change rather than preservation — in particular, change in its function. Currently it is a stucco box punctuated by picture windows and an entry awning unusual for a single-family residence. However, the building’s initial function was as a grocery store. Based on city directories, the grocery was operated at least 1915–1922 by Anna E. Magnuson, widow of John A. Magnuson. (Mr. Magnuson is listed on the building permit from 1914.) By 1940, it had changed hands to Edw. H. Zoback, who continued to operate it as a grocery through the 1940s. In the 1950s, Woody Danielson took over and began operating a retail florist shop, The Flower Corner, coinciding with a burst of building permit activity. Sometime between then and the mid 1960s, he appears to have converted the building to its current residential use. 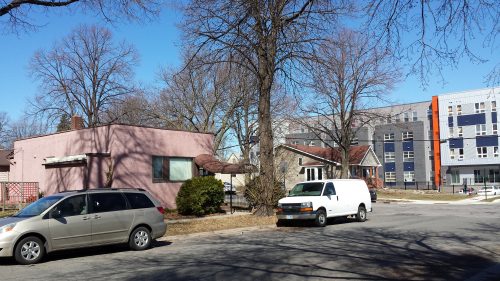 Across 32nd Street, a closer look at the Blue Line Flats reveals a cluster of gabion benches, which might prove useful for bicyclists changing in or out of their cycling shoes. 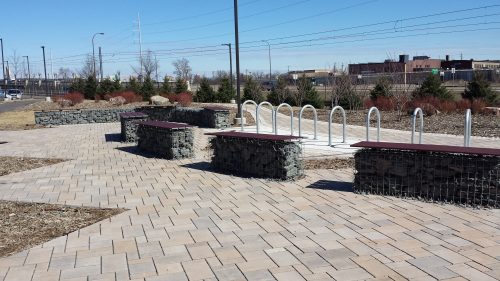 Heading west on 32nd Street brought me along the south side of South High School, constructed in 1970, near the end of the Brutalist architectural movement. The structural skeleton of exposed concrete is visually prominent, but it is softened by the darker panels of brick veneer and the curved protuberances on the west side. 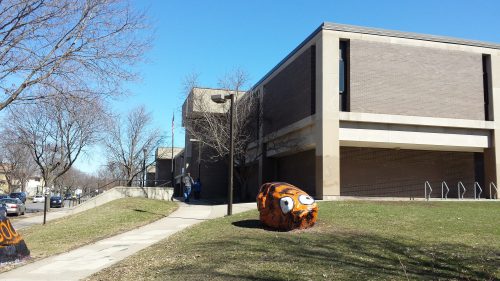 After finishing 32nd Street and looping briefly down to 33rd on 20th Avenue, I headed north on 21st Avenue, which allowed me to pass along the northern edge of the school’s athletic fields. In my youth, the area behind athletic bleachers was an attractive spot for mischief of one kind and another. These bleachers are engineered to make that impossible: locked metal doors close off the gaps between the bleachers and the fence. Just after I had noticed that precaution, I saw that it comes with a downside: any ball kicked over the top is locked in just as surely as the mischief makers are locked out. 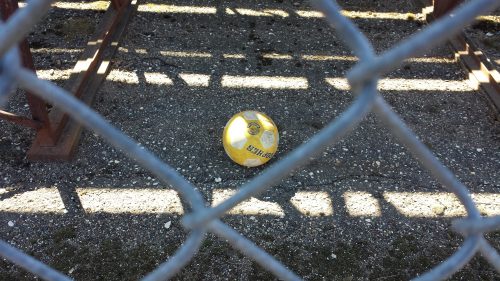 Encountering Iglesia Evangélica El Alto y Eterno Dios at the southwest corner of 20th Avenue and Lake Street, I saw that it did not fit the common pattern of one church having taken over a building previously occupied by another. Something other than a church had been in this space before, and I had an itching feeling that I ought to recognize what it had been based on the architecture — but I couldn’t quite come up with it. The answer only came (amid exclamations of “Duh! Of course!”) when I looked up the property information: this building had housed VFW Post #9562, the Seaman-Gilfoy Post. 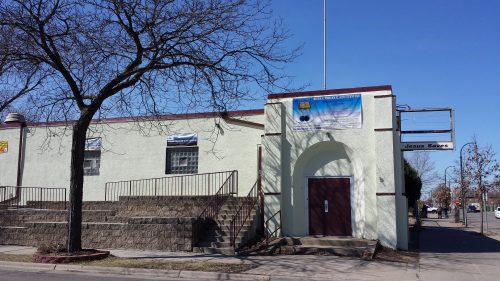 Of the three half-block-long spurs from 30 1/2 Street to Lake Street, the third offered the greatest payoff. The southwest corner of 19th Avenue and Lake Street is home to La Alborada Market. As described in Heavy Table and Twin Cities Daily Planet, this market offers not only a full range of groceries (and a money-wiring service), but also an antojitos (snack) counter where one can order food to eat there or to go. Really it’s more of a full restaurant; the offerings extend from tacos to caldo de mariscos (seafood soup). The biggest surprise for me were the platters of oysters on the half shell. This being a weekend day, menudo and pozole (tripe and hominy soups) were also on offer; I ordered the menudo. To the question of tostadas or tortillas, I answered tortillas — which worked out well.

The bowl of menudo was large and full of big hunks of tripe. It came with a cardboard tray of lime, onions, herbs, and quite a few fried chiles. My first impression was that the chiles were way beyond what I’d need. However, after I cautiously started with just one, I discovered that they actually aren’t particularly hot. I did leave a couple of them behind, but I crumbled most of them into the soup.

Tasty as the soup was with the various additions, the real star of the show for me was the tortillas, which came out piping hot and very fresh tasting. There are three kinds of tortillas: (1) those produced in a factory and reheated, (2) those freshly made from masa harina (dried hominy flour), and (3) those freshly made from freshly prepared masa (hominy dough). I’m no expert in these matters, but I would lay a wager that these were tortillas of the third kind. At any rate, I enjoyed them enough that next time I’ll order tacos — or maybe one of items featuring a thicker masa cake. 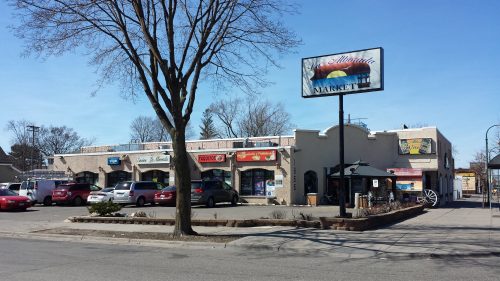 After lunch, I saw several more churches. The first two came in close succession on the block of Longfellow Avenue just south of Lake Street. The first was All Saints Episcopal Indian Mission, at the the northwest corner of Longfellow Avenue and 31st Street. This church is also home to the First Nations Kitchen. On a previous day, I had noted a Catholic church with a primarily American Indian congregation in the Central neighborhood. That means that within my first year of walking Minneapolis, the number of American Indian churches I was aware of went from zero to one to two. Sometimes there’s nothing quite like walking past something to eliminate a blind spot. 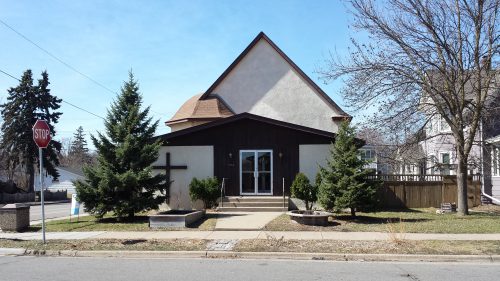 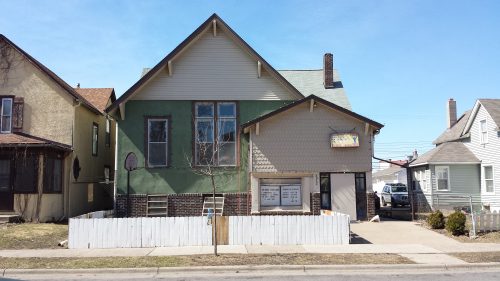 The last building on that western side of the block has its front on Lake Street but is worth seeing from the Longfellow side for the sake of the mural. Across the avenue, Little Brothers–Friends of the Elderly is noteworthy for being one of only seven chapters in the US of an internationally much larger organization that spread outward from France. 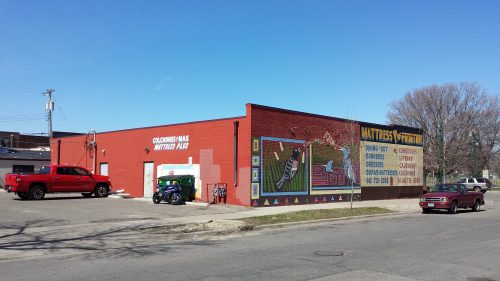 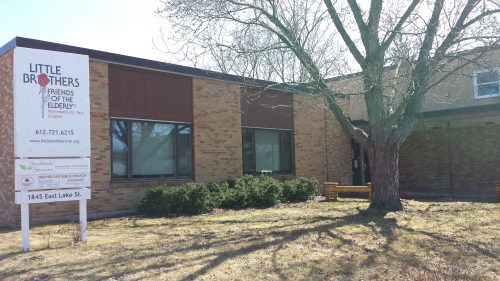 I followed Lake Street back to my starting point at 22nd Avenue. The southwest corner of this intersection has a huge YWCA facility, while on the southeast corner a new Hennepin County service center is taking shape together with apartments and other amenities. The YWCA and the construction site both host public art.

In front of the YWCA is “3 Forms, The Lake Street Bubbler,” described by artists Sara Hanson and Gita Ghei, who created it along with JanLouise Kusske and students from South High School, as documented in the project blog. In addition to the bubbler itself, the installation includes a bench with multilingual H2O molecules made by the students.

Meanwhile, the 22nd Avenue side of the county site is decorated with artwork formed by weaving fabric strips through the mesh of the construction fence, akin to a rag rug. 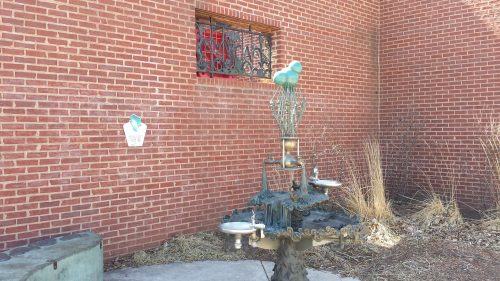 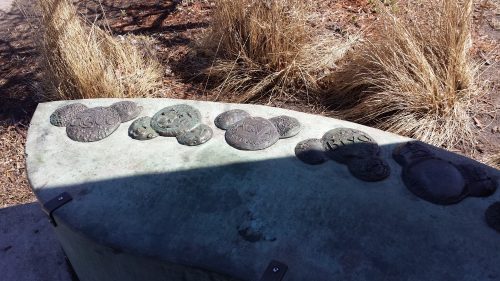 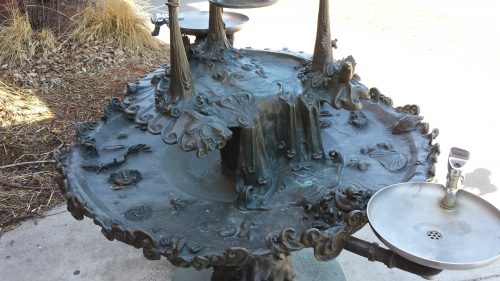 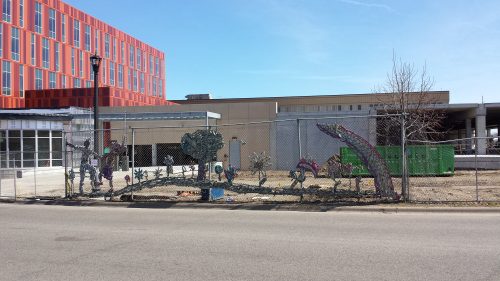 A couple blocks further south on 22nd Avenue, I encountered the fourth and final church of this walk. Four churches in a single walk doesn’t set a new record for the “All of Minneapolis” project, but this is certainly a more church-dense area than many. The large lettering on the brick facade, “Vine Ev Church,” abbreviates one name for the church (Vine Evangelical Church), whereas the logo on the vestibule window gives the more recent “Vine Church Minneapolis.” Indeed the primary current spelling of that name appears to be “Vine Church MPLS.” To round out the roster of names, the church was founded as “Vine Congregational Church.” 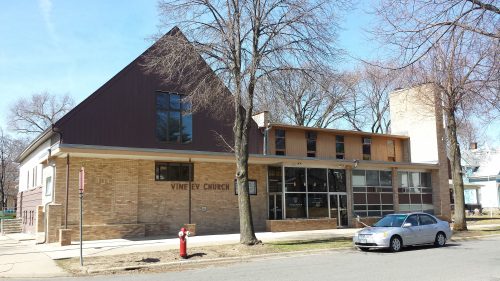 After walking south on 22nd Avenue and back north on 23rd, I followed 31st Street west to Cedar Avenue. This allowed me to see the South High School athletic fields again as I passed south of them and north of the main school property. The tiger mascot was much in evidence, both in signage and in a bronze statue. The patina was worn off one portion of the statue’s anatomy. 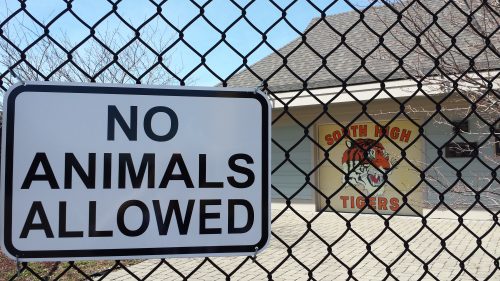 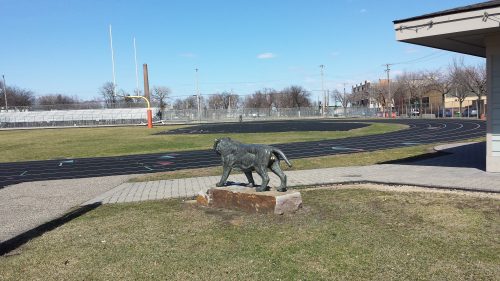 South High Tiger, Minus Some Patina

Further west, 31st Street also provides a perfect example of the benefit of looking at corner properties from both sides. Do you remember the All Saints Episcopal Indian Mission on Longfellow Avenue, a rather sedate composition of tan stucco with brown trim, including a brown wooden cross? Viewing the rear portion from 31st Street, one would hardly know it was the same church. 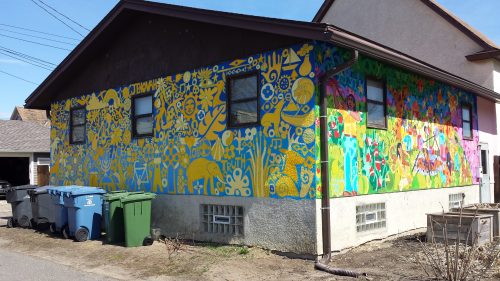 At the nearby intersection with Cedar Avenue, it appears that someone had a little fun turning the “Corcoran Neighborhood” sign upside down. I like to think they were testing to see whether anyone would notice. 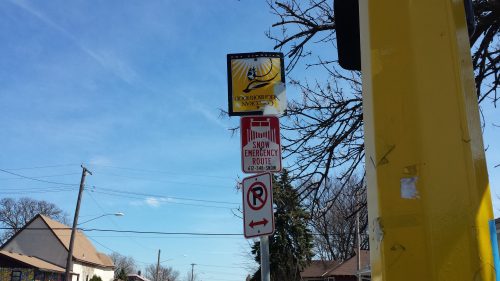 Read Two Signs, Then Stand on Your Head for the Third

This portion of Cedar Avenue carried three different streetcar lines (two of which branched off further south), so I expected to see commercial nodes every few blocks. Sure enough, the southeast corner of the intersection with 32nd Street has a one-story strip of storefronts from 1924. The prime position on the corner is occupied by La Rosa Market, another merchant of “Productos Latinos.” 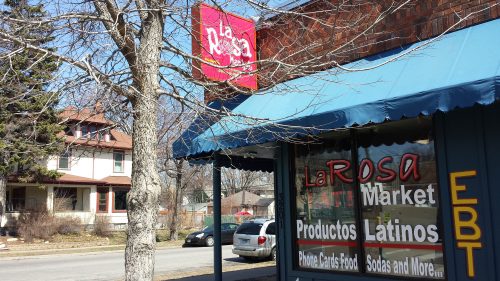 The corner of Lake and Cedar must have been an even busier place in the streetcar era, due to the crossing of lines. Fittingly, the City Market there is larger in size and is part of a two-story mixed use building. Unlike La Rosa (two blocks to the south) and La Alborada (not quite two blocks to the east), City Market doesn’t display its ethnicity so overtly, though the sign advertising halal meat is a good clue. I suppose the prominent mention of coffee is also culturally grounded, though coffee must rank with decimal numerals as among the most widely appropriated aspects of Islamic culture.

Editor’s Note: Max Hailperin is walking each of Minneapolis’ 87 neighborhoods, in alphabetical order. He chronicles his adventures at  allofminneapolis.com, where the original version of this article was published April 6, 2017. We’re sharing them here at streets.mn.